Salmon fishing has always been especially popular with fishermen all over the world. These beautiful fish spend most of their time feeding in the ocean and when the time comes, return to the river they were born in to breed. This is when fishermen have their chance as hundreds of salmon start coming upriver and pools get stacked with big fish just waiting to continue their journey. There are a few types of salmon out there and the species are split between the Atlantic and Pacific oceans. There is only one type of salmon in the Atlantic, known as Atlantic Salmon but there are a few types of Pacific Salmon, Chinook, Coho, Pink, Sockeye, and Chum Salmon.

Populations of Atlantic Salmon have taken a turn for the worse and this sees anglers trying to find them in more and more remote locations. Whereas Pacific salmon numbers have remained quite strong for a while thanks to being well governed, especially in Alaska. There are quite a few great places to salmon fish but today we are going to focus on the best salmon fishing in the world. 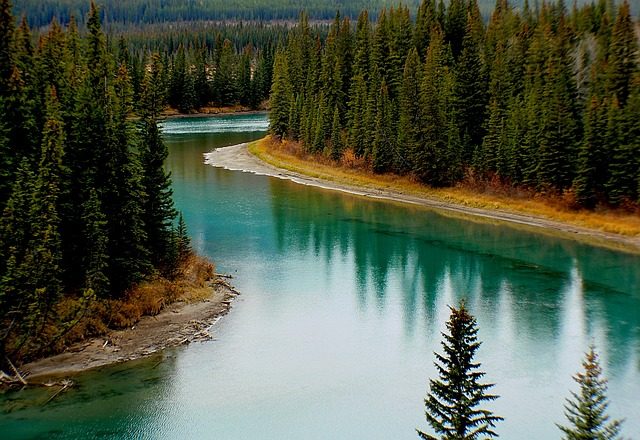 There are hundreds of rivers in Canada to catch Atlantic salmon in but some of the best rivers to throw a line in are the Grand Cascapedia, Bonaventure, Miramichi, Petite Cascapedia, Moise, Eagle, and Restigouche. These rivers are treated with the utmost respect and protection by the fly fishermen in Canada, not just for their beauty and wilderness but for the numbers of Atlantic salmon that run through them in the summer months. It’s not just great numbers of fish that return to these rivers, but some very large specimens too.

The salmon runs are not only good but are improving thanks to the work of the Canadian Government who has done a lot to protect them. Taking a fishing holiday here will have you surrounded by magical views, breathtaking scenery, picture-perfect rivers and of course, a good chance of catching an Atlantic Salmon. All the rivers mentioned above have world-class lodges and guides that will make your experience one you’ll never forget. 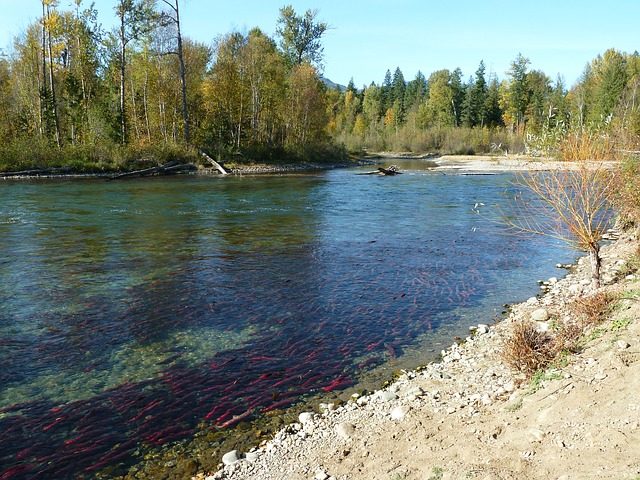 Alaska, also known as the last frontier, is a fisherman’s paradise and its no exaggeration to say that the fishing for salmon there is unparalleled. Alaska is home to five species of salmon; King salmon, Coho, Pink, Sockeye, and Chum Salmon all call the waters home and during the summer months the coastline and rivers of Alaska are teeming with fish. With a coastline that is longer than the whole of the United States, it offers incredible scenery and wildlife while giving you the chance to catch the salmon of your life.

The rivers in Alaska are as pure as they get. The water is crystal blue, super clear and full of fish. It is hard to comprehend but once you’re there, you’ll want to go back every year. It’s a place where you can catch a lot of fish and big ones too. When the King salmon run, you have an excellent chance to land a fish over 50lbs which is something to be said. The best fishing is found out in the wilderness, in the middle of nowhere and you will need a guide to show you around. There are a lot of lodges that offer world-class accommodation and guides amongst some of the most beautiful scenery a fisherman could hope for. Staying in a lodge, however, is not the only option. You can do multiple-day river floats which will have you camping by the river every night. These are a real adventure and will show you some of the most out of the way places in Alaska. You’ll end up seeing a very wild side of it all.

Fishermen who have been to Alaska get hooked quickly and find it hard not to return every year. The fishing is spectacular, the operations are smoothly run and you’ll be doing it all in a magical place.

While the Atlantic salmon are becoming harder and harder to find in European rivers, it has pushed angler to seek them further afield. Gone are the days of a long weekend in Scotland or Ireland that would yield success and today you see anglers saving up to go to places where catching a salmon in more of a guarantee.

Russia’s Kola Peninsula is one of the best places in the world to catch an Atlantic salmon. The populations are healthy thanks to the lack of fishing pressure in the surrounding ocean the salmon feed in called the white sea. The white sea is covered in ice most of the year and it’s full of food. This means that trawlers cant fish there and that the salmon don’t need to go to the  Atlantic to feed where they might get caught by commercial fishermen. It’s really the ice that has saved them and allowed for a booming population of salmon that run the rivers of the Kola Peninsula every year.

There are a number of great lodges in the Kola Peninsula operating at world-class standards with excellent guides. You’ll find yourself fishing from a jet boat and swinging flies on either side of the big rivers. They only way to get to the lodges is by helicopter, that’s how remote they are.  The rivers are protected, so are the salmon and are all encased in ‘The Atlantic Salmon Reserve’. This is undoubtedly some of the best Atlantic salmon fishing in the world and the season runs from May through to the end of October.

One of the best places to visit is the Ponoi River Camp. It has been running for years and is one of the top salmon lodges in the world. Here anglers can average 30-40 Atlantic salmon a week. 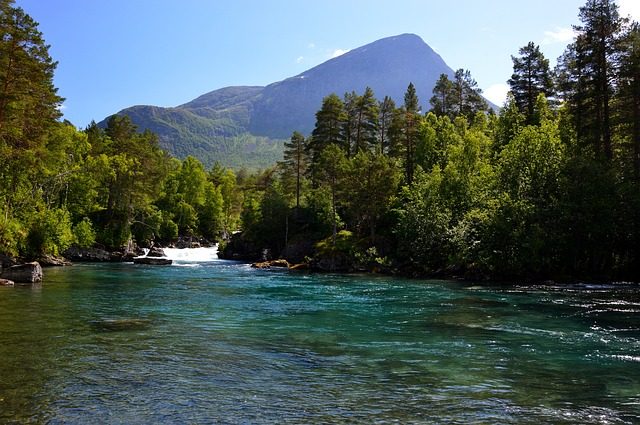 Norway has always been hailed as a great place to go to catch Atlantic salmon and for good reason. There are over 400 rivers to fish some of which are internationally known due to the numbers and size of the salmon they produce. The amount of salmon that return to Norway’s rivers year in and year out is actually a very significant part of the global stock of Atlantic salmon. This has lead to the further protection of the fish in terms of commercial exploitation and pushed the trend if catch and release fishing further.

The salmon season in Norway is pretty short compared to other parts of Europe and usually begins at the beginning of June and runs to the end of August but not all rivers follow this. Usually, the first weeks of the season produce the biggest fish as long as the conditions are right. The water can be too high with the snowmelt and this means the salmon won’t stop in pools and will run up the river without slowing down or eating. The medium-sized fish stat to arrive at the end of June and into July and then the small fish start to come in, aka grilse. There are still some bigger fish lurking around at the end of the season but it’s more likely a smaller fish will eat your bait. This does all depend on where in Norway you’re fishing though. In the southern half of Norway, the best weeks are the first and second of July and as you go further north, the late the best weeks become.

Fishing in Norway is a cool experience. You’re so far north that you’ll often have 24 hours of daylight to fish in. Some of the biggest Atlantic salmon call Norway home and every year fishermen come to beat their personal best. Fish over 30/40lbs are not uncommon and the big fish rivers of Norway are the Gaula, the Alta and the Lakselva where 50lb fish are often caught.

The Lakselva is easy to access by the public whereas the other two will require you to book privately or join a club, and the waiting lists can be very long. 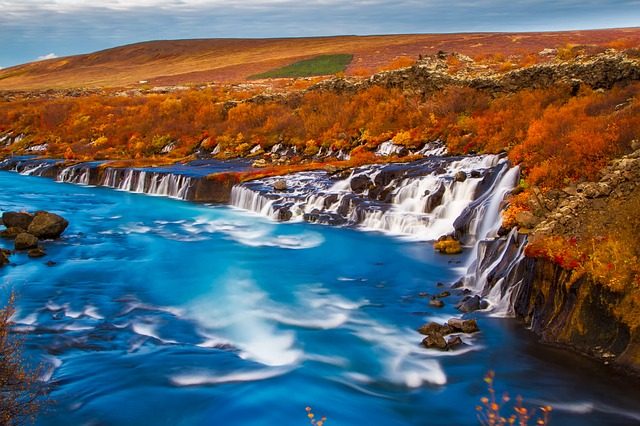 Iceland is a fly fishing mecca and its environment is second to none. It is a bit like being on the moon, a dramatic bouldery appearance with huge rocky features, beautiful rivers, and lakes. You really feel like you have taken a step back in time when you are surrounded by such stunning beauty in secluded peace, casting a line on a river or lake full of fish.

Iceland takes its fishing seriously and they protect it very well. On arrival, your fishing kit is disinfected at the airport before you are allowed to head off into the wilderness, that’s how seriously they take it. It has excellent runs of Atlantic salmon you are usually fishing in gin clear waters where you can see the fish you’re targeting. The rivers are often small and a single-handed rod will do the job.

Iceland is extremely well set up for fishing, with private guides and lodges available all over the country, but it is expensive. The fishing season runs from May through to the end of October and the best time for salmon fishing is in July.