Tsavo East National Park is one of the oldest and largest parks in Kenya. It was first opened in April 1948 and covers a huge 13,747 square kilometers. It sits halfway between the coast and Nairobi in an area that was once referred to as the Taru Desert. It has been referred to as one of the world’s biodiversity strongholds thanks to its many different inhabitants of flora and fauna. It’s a highly popular safari destination in Kenya thanks to its wildlife and proximity to both Nairobi and the Coast. It’s also large enough that you won’t feel as if you’re in a touristy park like you might in smaller crowded parks such as the Masai Mara or Amboseli. If you’re planning on going on safari and haven’t quite made your choice yet, here is everything you need to know about visiting Tsavo East National Park. 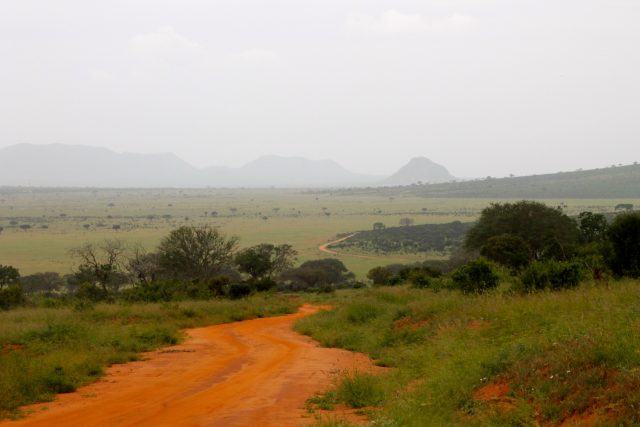 Tsavo East is the largest protected area in Kenya, generally quite flat and is made up of semi-arid grasslands and savannah. The Athi and Tsavo rivers flow into in and merge inside the park to form the Galana River. The park is full of interesting features such as Lugard Falls and the Yatta Plateau.

The Yatta Plateau is the world’s longest lava flow and is 290 kilometers long. It follows the Athi River near the park boundary and was formed in an eruption from Ol Donyo Sabuk Mountain.

Tsavo East is most famous for its larger mammals, mainly the population of ‘red’ elephants. The soil in Tsavo is a deep red color and elephants ‘dust’ themselves in it, making them a deep red color. 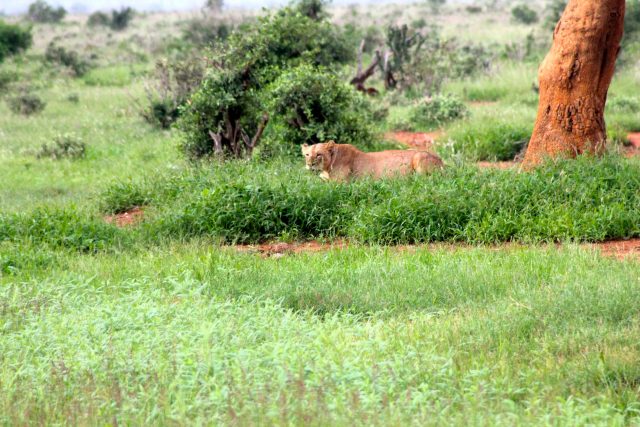 Tsavo East is home to the big five; elephant, rhino, leopard, buffalo and lion. Your chances of seeing all these on a trip there are pretty high as their populations are well looked after. There’s also a lot of zebra, giraffe, cheetah, hippo, crocodile, lesser kudu, gerenuk, many other types of antelopes and more. You won’t have much time in the car without something to look at I can promise you that.

The wildlife is quite easy to see thanks to the flat grasslands and the well-networked roads that make up the park. It’ll pay to have a guide when looking for them, as they will know the movements of the animals and where your best chances of seeing things like leopards and lions will be

The birdlife in Tsavo East is out of this world and the park is home to some 500 species. It has many dry country birds and most of the birds you may want to see are residents making them easier to spot. Some of the most amazing birds to see in Tsavo are the Golden-breasted starling, golden pipit, vulturine guineafowl, secretary bird, Somali ostrich and a lot more. The park is also significant for migrant species between November and April. 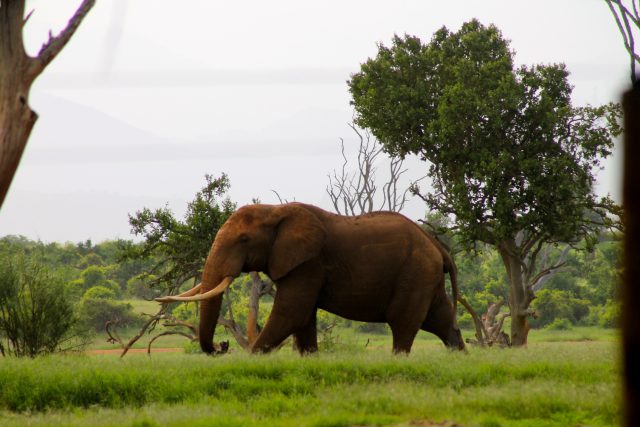 There are quite a few different activities to do in Tsavo East and most of them are your classic safari type things. \

Most days you’ll be going on game drives to see the amazing wildlife. These will depart early in the morning and you’ll return to camp for lunch before heading on an evening drive.

You can pre-book a night game drive where you are likely to see some of the nocturnal animals of the park and maybe a kill if you’re lucky from some hungry lions. This lasts a few hours and you’ll be back in camp for lunch.

Head out with an armed ranger and go for a bushwalk through the savannah. This is by far my favorite thing to do. Your guide will teach you how to identify tracks, skat, and edible plants plus you’ll get to walk amongst some of the safer animals in the park. There is no feeling quite like standing a few hundred meters from an elephant or watching as a herd of zebras walks cautiously around you.

Why not take a picnic and spend a full day in the car to see the magnificent Lugard Falls where you’ll also see crocodiles and hippos and then head on to the lava flow of the Yatta Plateau. 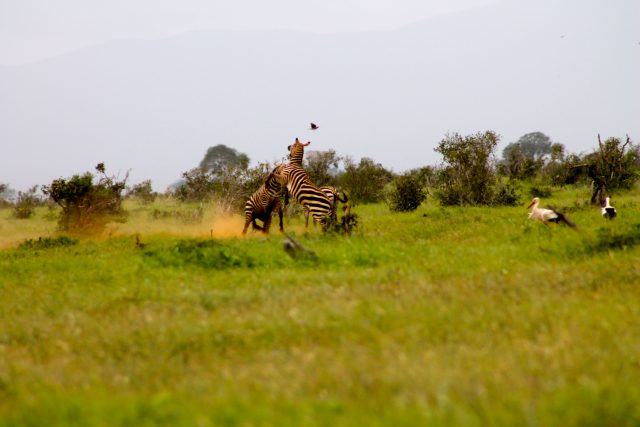 There are a lot of options for accommodation in Tsavo East ranging from camping to luxury tented camps. You will have to choose to either stay inside the park or just outside and there are benefits to both of them.

Staying inside the park is a little more expensive but you will be inside the park and be able to access more areas without having to exit each day. Staying outside the park will reduce your cost a little, but entering and exiting each day can get a little annoying.

There are numerous campsites within Tsavo East and they can easily be found here or you can get a map to them at the park entrance. If you plan on camping, you will have to bring all the food, water and camping gear with you as you can not get any of it near the park.

There are some beautiful tented camps inside the park and I would choose them based on the entrance you’re coming in from.

If you’re planning on entering from the Voi side, then stay at Satao Camp. It’s a stunning series of canvas tents that overlook Satao’s own private watering hole. They provide complete bush luxury and each tent is ensuite with hot water and has its own verandah that overlooks the watering hole. You can sit back and watch elephants drinking and playing while sipping a cold drink in your own private luxury. Satao is not fenced and I have been quietly drinking afternoon cup of tea when a female lion just wandered past, you can’t get closer to the action. The service is excellent at Satao and you couldn’t ask for better food or guides.

If you’re coming in from the Malindi side and the Sala gate, then Kulalu Camp is a stunning place to stay. It is outside of the park boundary but only a few minute’s drive away. The camp is formed of 5 canvas tens that all overlook the Galana River and the services and accommodation are excellent.

If you’re looking for more of a budget option then many can be found online and on google maps. I’d recommend Crocodile Camp, near the Sala gate and Impala Safari Lodge near the Voi gate.

Tsavo East is slap bang in the middle of the Nairobi to Mombasa road. It has numerous park entrances along the road and the park headquarters are found at the Voi gate, just outside of Voi town. It is about a 4-hour drive from Nairobi and 3 hours from Mombasa. The Nairobi to Mombasa road is the main highway for all the trucks carrying containers from the Mombasa port and is slow going, to say the least.

If you are driving from either Nairobi or Mombasa, it’s best to enter the park from the Voi gate as the park headquarters will be able to give you everything you need. If you are traveling from Mombasa there is a gate before Voi called the Buchuma Gate. Entering here will save you some time on the Nairobi-Mombasa road which is well worth it but you’ll have to organize your entrance fees beforehand at a Kenya Wildlife Service (KWS) office in Mombasa.

If you are staying on the north coast of Kenya, around Kilifi, Watamu or Malindi, then accessing the park through the Sala Gate is by far your best bet. The Sala Gate is about a 2-hour drive from Malindi on newly tarmacked roads that are pretty much empty.

It is easy to hire a 4×4 and drive yourself, and way more fun in my opinion. The roads are pretty safe and easy to drive on plus you’ll get the added sense of adventure of discovering the park and finding the animals yourself. If self-drive isn’t up your street, then the camp you’re staying at or tour operator will happily organize your transfers and game drives for you.

The best times for a safari in Tsavo East are December – April, and July – October which is outside of the raining season in Kenya. In the months of July and December, the park will be very green and lush whereas in March it will be very dry and arid. You can, however, visit all year round and are more likely to get a deal in the offseason during May and June.

Tsavo East is one of my favorite parks in Kenya and it’s mainly due to its size and location. It is the perfect park to hop to from chilling on the beach or break up a journey from Mombasa to Nairobi. It’s also quite magical because it is so big and one of the few parks where you can get away from the crowds and feel like you’re on your own adventure.