So you’re thinking about an island getaway but you want something a little bit more off the beaten track than the Maldives. At the same time, you don’t want to spend two days flying to the South Pacific so where should you go? Well, there are many islands to compare, but Mauritius vs Seychelles is perhaps the two that come to mind. They are both stunning islands to visit, easy enough to get to and there are great things to do. 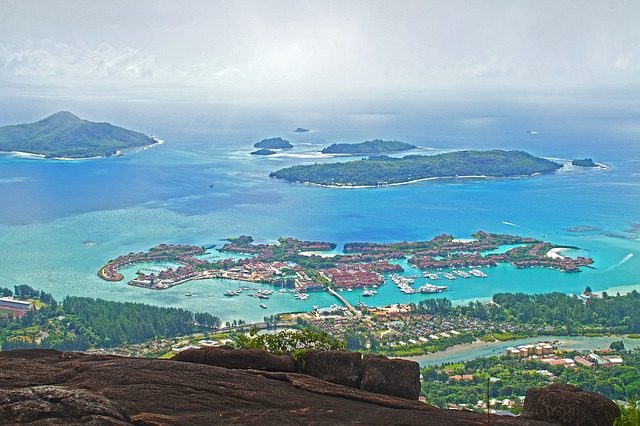 Today, Seychelles is full of life and culture and is slowly becoming a more and more popular island destination. It’s land that is still waiting to be discovered where nature fanatics and beach bums alike can have an amazing time.

The Seychelles are formed of an archipelago consisting of 155 different islands some of which are still uninhabited, sit in the middle of the Indian Ocean. The main island of Mahe which holds the capital, Victoria, is about 1000 miles east of the coast of Kenya. The islands are home to some of the world’s rarest species, azure blue seas, pristine beaches, jungles and a wealth of history and culture.

The islands were first spotted by European vessels in 1503 during one of Vasco De Gama‘s voyages through the Indian Ocean, but they did not stop and simply passed by. It wasn’t until 1609 when the first recorded landing happened. It was the British who first wandered the islands but they made no claim to them and the islands were used by pirates as a place to hide and restock until the French laid claim to them in 1756. The French were not in power for long and the British took over in 1794.

The food in Seychelles is Creole cuisine and it incorporates a large variety of styles. It is influenced by all the different nations that have called Seychelles home. The flavors have tastes of French, English, Indian and Chinese cooking styles while bing island style. The main dishes are focussed around fresh seafood, local fruit, and spicy curries. You can find Creole food all over the islands from hotels to guesthouses. Some of the specialties include

If this doesn’t sound like the kind of food you’re into then don’t worry, most restaurants serve food from around the world and you’ll be spoilt for choice. 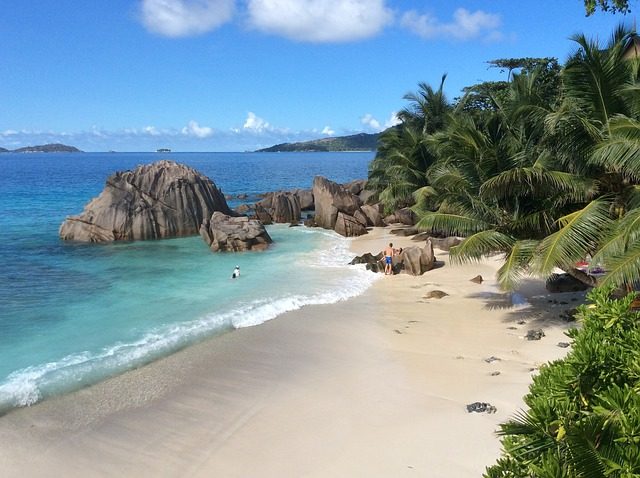 There’s a whole bunch of interesting and fun things to do in Seychelles and here are a couple of the best.

Take In Some History

Most of the historical sites are around Victoria on Mahe Island and there are quite a few to visit. There are old Catholic churches, Hindu temples, a replica of big ben and the famous fountain ‘Jubilee De Diamand’ which was made of Queen Victoria in 1900 and more. The old homes exhibiting colonial architecture and something to behold and the ancient planter houses and museums are also interesting sites to visit.

The islands of Praslin and La Digue are a short ferry ride away from Mahe and offer a much more tranquil atmosphere to that of the main island. They are surrounded by beautiful beaches and have stunning jungles inside them that are a pleasure to explore. La Digue is particularly cool as there are bare any cars on the island and you’ll have to get around by bicycle, giving you a sense of real island life.

An easy boat ride from Mahe, Praslin or La Digue is Curieuse Island. The entire island is a nature reserve and is uninhabited bar the rangers who live there. On the island, you’ll walk through a coco de mer forest, a tree only found in Seychelles that has the biggest seed/nut in the world. You’ll also get to see some of the 120 Aldabra giant tortoises that call the island home and are endemic to the Seychelles,

Seychelles is home to world-class offshore fishing as well as some of the best flats fishing in the world. If it’s offshore you’re after, then renting a boat from Mahe will do you just fine. If you’re a fly fisherman, you’ll want to head to the outer islands of Alphonse, Astove, and Cosomoledo where some of the best guides in the world are waiting to make your dreams come true.

Getting There and Around

Getting to Seychelles is easy and there are direct flights from both Paris and London on a weekly basis and daily flights from most of the main middle-eastern hubs. All international flights land on the main island of Mahe and from there you can get on a boat or a plane to neighboring islands.

Ferries to nearby islands are easily organized from the islands and you can fly to a lot of them too through IDC (Island Development Company).

The weather in Seychelles can change very quickly as a tropical storm can easily swing by and miss the island you are on or come straight over it. That being said there are some patterns to it. There are two main monsoons, the northwest, and the southeast. The southeast monsoon begins in May and runs through to the end of October. During this time, it is very windy and very dry, with not much rainfall at all.

The northwest monsoon begins in November and goes until April when the wind begins to swing again. This is Seychelles wettest time with the months of December and January getting the most rain. March and April are the hottest months of the year as the wind dies and you can get very still days.

The rain is quite localized in Seychelles and you are not going to get rained on for more than 3 days in a row before the system moves off, so you can visit any time. If you plan on spending a lot of time in the ocean snorkeling, diving or fishing, it’s best to avoid the southeast monsoon as the water gets very rough due to the high winds. 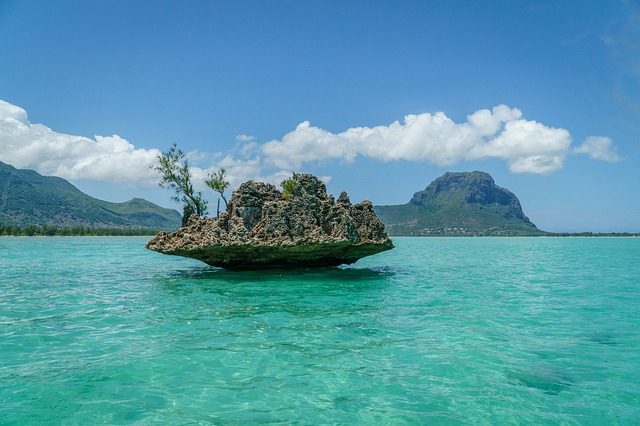 Mauritius, unlike Seychelles, only has a few islands to be explored, the main island and Rodrigues. There are a few smaller islands to the north of the main island which are uninhabited and can be explored on a day trip if the weather permits and the far off islands of St Brandon’s and Agalega.

Mauritius sits around 500 miles east of Madagascar in the middle of the Indian Ocean just northeast of Reunion.

Mauritius has changed hands a lot over its history. It was first named Dina Arobi by Arab sailors who used the island in around 975 AD. After that, it wasn’t until 1507 when Portuguese sailors came to the uninhabited island and made a base but they didn’t stay long as they had no use for the islands. Then the Dutch arrived and took control from 1638-1710 and used the island for its ebony trees and began trying to settle but failed and left. The French then arrived from Reunion and took control until 1810 when the British took over until Mauritius finally got its independence in 1968.

Thanks to Mauritius historically being a melting pot of cultures, the food has influences from all over the world. You can expect to find Creole, French, English, Indian and Chinese flavors across a range of different dishes. You can go from coq au vin to curries, via noodles and bacon all backed up by creole ingredients of tomatoes, onions, ginger and a mild range of spices. Some of their specialties are Mine Frites, soy sauce fried noodles with spring onions and chilies, fish vindaye, curried fish with rice and vegetables, and, camarons, freshwater prawns served in a hot sauce. 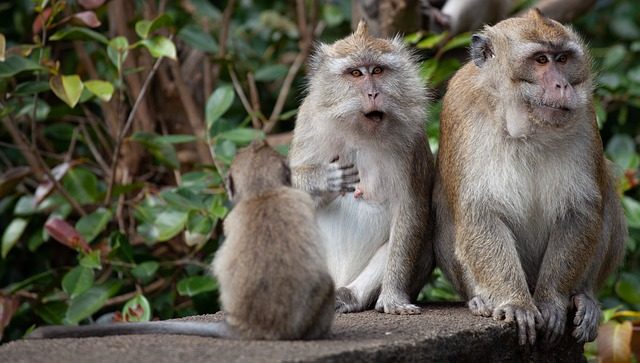 There are a lot of fun things to do in Mauritius and here are a few.

Port Louis is the capital of Mauritius and is a melting pot of Mauritian culture. There is so much going on there you may need more than a day to discover it all. Some of the things not to miss are the bazaar, a central market where you can find locally grown vegetables, exotic foods, local products and spices, arts, crafts, and souvenirs and the Blue Penny Museum, The Stamp Museum, and the Mauritius Natural History Museum.

The Black River Gorges National Park is the last remaining Mauritian forest and it covers about 2% of the island. It was once a hunting ground but was made a reserve in 1994 when scientists discovered over 300 species of flowering plant, 9 endemic bird species and a huge population of fruit bats. While wandering through the ancient ebony forest you’ll see beautiful waterfalls, macaque monkeys, wild boar, deers and if you’re lucky some of the most endangered birds in the island, the Mauritius kestrel, the echo parakeet, and the pink pigeon.

Mauritius is one of the best places in the world to fish for blue marlin, so much so, that the marlin world cup is held there every year between February and March. Most hotels will have a boat you can charter for the day and you’ll experience some amazing fishing. It’s not just marlin, there are tuna, wahoo, sailfish, and more to be caught.

Blue Bay Marine Park is a great place to spend the day chilling on the beach, diving, surfing, and snorkeling. It is home to over 50 different species of coral, some of which are very rare, as well as a hugely diverse number of fish species. It’s easy to book a dive and get snorkeling gear from a number of hotels and dive centers at the beach.

There are also great diving and snorkeling opportunities to be found all around the island and you can have an amazing diving holiday there but it’s said the diving is better in Seychelles. 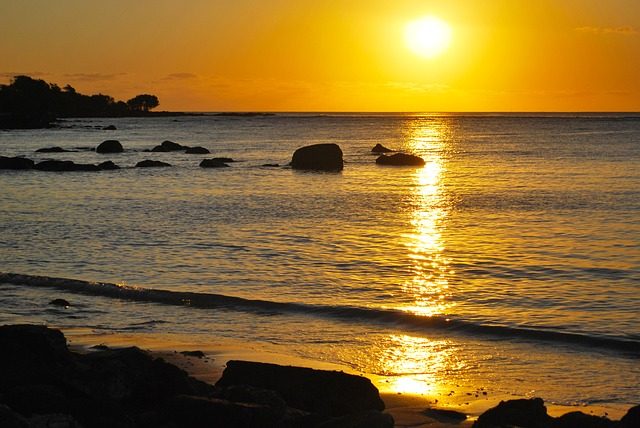 Getting There and Around

Getting to Mauritius is easy if you are flying from Europe and there are direct flights from both London and Paris. You can also fly via one of the many middle eastern hubs. If you’re coming from the U.S then your best route is via Europe but it will take you over 24-hours to get there.

If you plan on staying on the main island your flight will land at Sir Seewoosagur Ramgoolam (SSR) airport on the southeast of the island. If you’re heading to Rodrigues, then you’ll change planes at SSR for your short hop to the island.

Once you’re in Mauritius, the best way to get around is by taxi although the public buses are pretty good.

Mauritius has similar seasons to Seychelles with the same southeast and northwest monsoons happening at the same time. It’s pretty much hot all year round with a windy and wet patch. The best time to visit is between May and December when its dry and sunny but cool thanks to the winds. If you plan on being there in July and August avoid staying on the east coast as it will be very windy. The months of January, February, and March are the wettest months and are best avoided.

Both Mauritius and Seychelles are amazing holiday destinations. If you’re into nature I would recommend Seychelles as there is a lot more to discover and a wealth of national parks. If you’re looking for a fun-filled back holiday with some culture attached, Mauritius is the place to be.