Amboseli National Park is one of Kenya’s most famous wildlife refuges. It sits in south-central Kenya near the Tanzanian border and is famous for the stunning backdrop of Mt Kilimanjaro looking down upon its plains. It is a very popular safari destination in Kenya and that is thanks to the spectacular views and the park’s abundance of elephants. 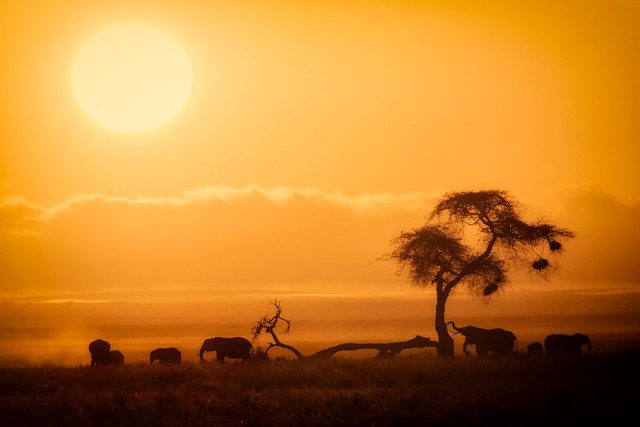 Contents hide
1 About
1.1 Mt Kilimanjaro
1.2 The Wildlife
1.3 The Masai
2 Safari In Amboseli, What Makes It So Special?
2.1 The Elephants Of Amboseli
2.2 Bird Watching
2.3 Visit A Masai Manyatta
3 Where To Stay
3.1 Camping
3.2 Self Catering Cottages
3.3 Tented Camps
4 Getting There
5 Should You Go?
6 The Location

Amboseli National Park is one of the most famous safari destinations in the world. It became a national park in 1974 and a UNESCO Biosphere reserve in 1991 and is an average size as far as the parks in Kenya go, spanning 390 square kilometers. Within this broad area, you have five different habitats to explore, ranging from the dried-up bed of Lake Amboseli, wetlands, sulfur springs, savannah, and woodlands. 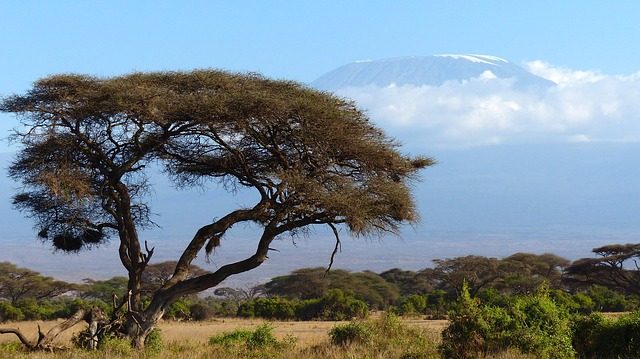 Mt Kilimanjaro is the world’s largest freestanding mountain and was once part of Kenya until Queen Victoria gave it to her grandson, Kaiser Wilhelm II of Germany, as a birthday gift in 1886. What a weird world it was when you could just drop off a mountain for someone’s birthday.

The mountain today still has a tiny bit of snow on the top and the view of the dramatic crater at the top is very encapsulating. But the mountain has a bigger purpose than just an addition to the scenery. The glaciers found on Mt Kilimanjaro play a very important role in keeping Amboseli alive. As the glaciers melt, the water finds its way down the mountain and into lush green swamps at its base.

This water then makes its way to the thirsty land of Amboseli and create the dense, swampy, reedy oases of Enkongo Narok and Olokenya swamps that without which the life in the park would not survive. 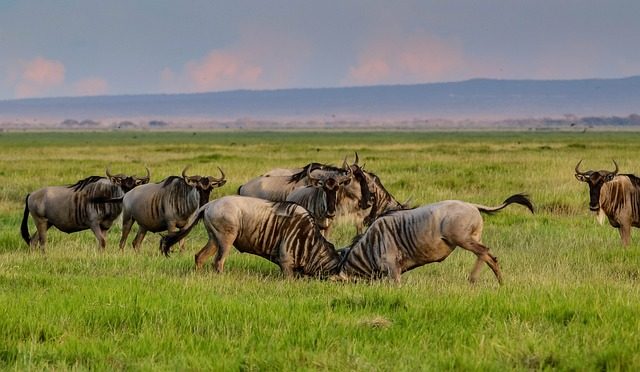 The park is home to the ‘Big Five’, a lot of other wildlife and a hugely diverse range of bird species. The game you are likely to see includes leopard, cheetah, wild dogs, buffalo, giraffe, zebra, lion, crocodile, mongoose, hyrax, dik-dik, lesser kudu, nocturnal porcupine and of course elephants.

Amboseli has a big population of elephants and is known as ‘the land of giants’. It is one of the best parks to visit if you want to get up close to them and has some of the biggest bull elephants in Kenya.

There are around 600 species of birds that call Amboseli home at some part of the year, which is a dizzying amount, almost 2 for every square kilometer.

Unfortunately, the predators in the park have reduced in numbers and that is because of human-wildlife conflict over grazing lands. The local cattle herders, the Masai, will protect their cattle and kill anything that tries to hurt them. This has resulted in a decrease of the lion population of the park in particular, as they fancy a cow as an easy meal compared to having to chase after an antelope. This has been a long term issue in Kenya and Tanzania but it is being managed.

Amboseli is in Masai land and they are the predominant tribe in the area. The name Amboseli comes from a Masai word meaning ‘salty dust’ and it is quite apparent as to how the park got its name if you ever happen to visit it in the height of the dry season when water is scarce, and the park becomes a dust bowl. You can feel nature holding fast until the rains eventually come.

While staying in Amboseli you will undoubtedly have a chance to interact with the Masai culture. The Masai are thought to have migrated south from Nilotic regions a long time ago and they now call Kenya and Tanzania their home. They are very proud people and their life revolves around their cattle which are mainly cows.

Cows come before everything else for the Masai and are the single most important aspect of their lives. The Masai men take great pride in herding as their cows are their most prized possessions and a good herd is a sign of affluence.

The Masai were once nomadic and today have become more semi-nomadic due to development. Thanks to their nomadic nature, they are spread across such vast expanses of land and they have the opportunity to meet fellow tribespeople from far away. This presents the Maasai with a great opportunity to use their cattle to barter with and having a good herd of cattle is flaunted in the same way a westerner might do with a new car.

Their movements today are based on a communal land management system that has been set-up to ensure their herds have good grazing but at the same time do not cause any damage to nature and the national parks. You can imagine a herd of 1000 cows feeding in the same area every day is going to cause some issues in terms of erosion, deforestation and be a tempting meal for a lurking lion.

Their movements are now planned to ensure that the areas in and around Amboseli are used sustainably while protecting the Masai culture, the land, and wildlife. This will hopefully help to ensure the park’s longevity and stop the reduction in lion numbers that occurs due to human-wildlife conflict.

Safari In Amboseli, What Makes It So Special?

What does make Amboseli so special? If you were to take away the stunning views of Kilimanjaro you might think you were driving around any of Kenya’s national parks but Amboseli is a little different. Its wide-open plains provide stunning sunsets and make it very easy to spot game whilst bumping around in your 4×4, as there is no cover for the animals to hide behind. That is not all that is special about Amboseli, the elephant population in the park are a little different than usual. 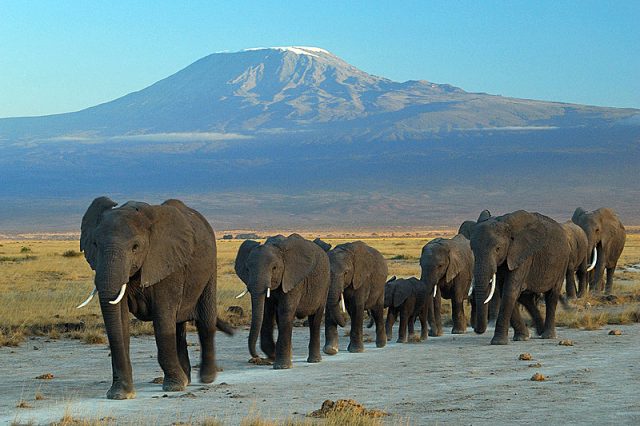 The Elephants Of Amboseli

Amboseli is home to a few elephant celebrities like Tim, who is now a world ambassador in the fight to protect his species. The protection of elephants is the park’s main focus and this is run by the Amboseli Trust for Elephants, which aims to protect the wellbeing of elephants for generations to come.

The trust’s main research arm, the Amboseli Elephant Research Project, began in 1972. They have been constantly monitoring and collecting data on the elephants in Amboseli for decades and they leave no stone unturned. Their team is in the field six days a week and their routine daily observations note population, family association, geographic location, group size, activity, growth monitoring, and family dynamics as well as a lot more. It is the collection and understanding of all this data that underpins the knowledge and the means to protect the species in the right way.

When they first started there were only 800 elephants in the park and through their careful work, they have altered how elephants are now considered and conserved. Thanks to the implementation of their program, the population has grown considerably over the last few decades to 1,600 elephants. It is quite amazing work and this is what makes the elephants so special to see, they are not scared of humans.

The elephants in Amboseli have a history of positive human interaction thanks to the ongoing research. This means that they are not worried when they see a vehicle or a strange human because they have come to understand that there is nothing to fear. This allows you to get very close and have unforgettable encounters with huge bulls, large family groups and the cutest of baby elephants. 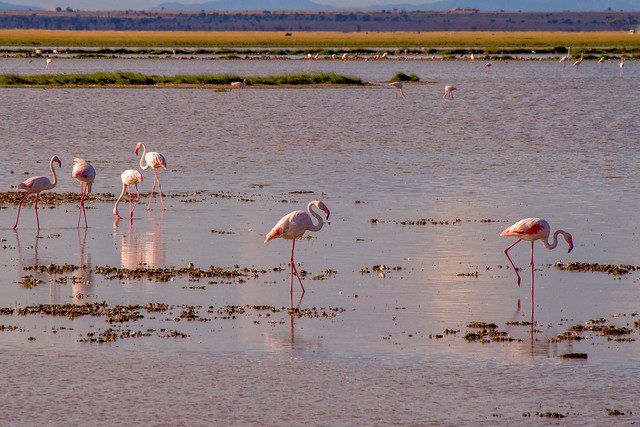 Amboseli is a good destination for anyone who is into their Birds. There are more than 420 species that have been recorded there and some stats say up to 600. The swamps are the perfect habitat for water-associated birds such as egrets, herons, pelicans, crowned cranes and large numbers of flamingos can be seen in the wet season from March to May and October to December.

The savannah also offers some interesting opportunities for birding. You can see ground birds such as Hartlaub’s bustard and the local Pangani longclaw. In the acacia woodland, you can find some classic birds that call the drylands home and special ones such as the steel-blue whydah, white-bellied go-away bird and the Von der Decken’s hornbill are often seen. 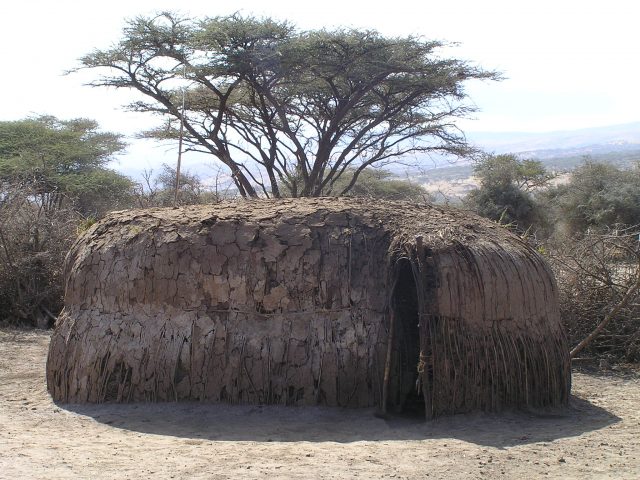 Amboseli is in Masai land and experiencing it wouldn’t be the same without a visit to a Manyatta. A Manyatta is a traditional Masai village and is made up of several cow dung walled huts with thatched roofs. A visit entails a simple walk around a chance to learn about Masai culture and to interact with the people who live there. They are very sweet-natured and are always up for a conversation. If you want a conversation starter, speak to the men about how they used to hunt lions as a tradition and how they go about it today, it will be very interesting.

There is a range of options for all budgetary needs when it comes to accommodation in Amboseli. You can camp, rent a self-catering cottage or stay in a luxury tented camp. 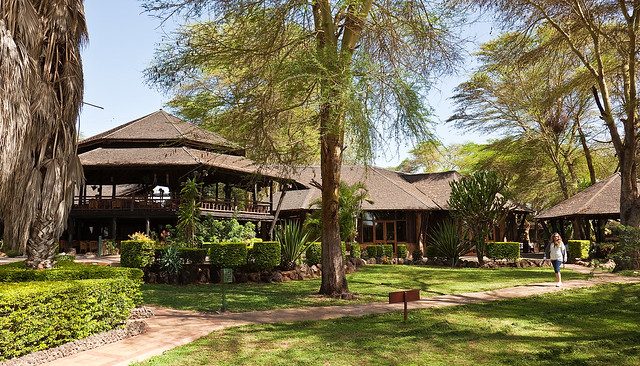 When camping in Amboseli you will have to be self-sufficient and bring everything you need with you. There is one campsite in the park called Amboseli Campsite which is located 200 meters from the national park headquarters. The site has toilets, bathrooms, and access to freshwater, just check with the wardens beforehand to see if you can drink it.

There are 3 self-catering cottages inside the park and details on how to book them can be found here. Each one comes with standard facilities and electricity from generators. They range in size and price so to be sure to pick the one for you.

There are a few luxury tented camps to choose from and if you have booked with a tour operator, I’m sure they will have filled you in on your options. The main three are Oltukai Lodge, Amboseli Serena Lodge, and Tortilis Tented Lodge.

Tortilis Lodge is a little different as it is part of a conservancy connected to Amboseli which is exclusive to those that are staying there. This will give you a great sense of privacy and a more personable safari experience as you are less likely to bump into any other tourists. 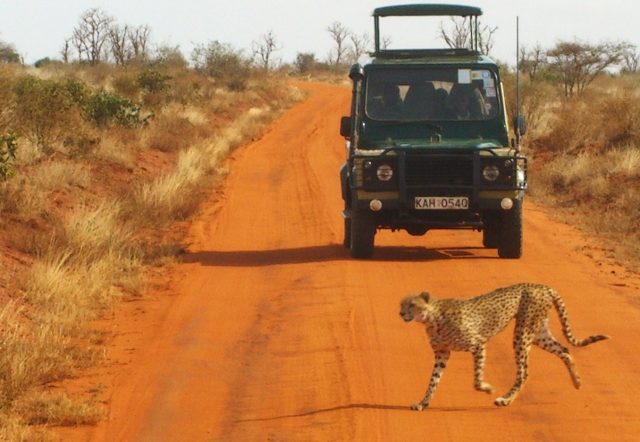 Amboseli is very easy to access by car from Nairobi and Mombasa, and the drive only takes about 3-4 hours. It is also in an ideal location to connect a safari together. You can travel via Amboseli on your way to or from the coast, Tsavo and the Masai Mara.

If you would like to fly to Amboseli, there is one airstrip in the park for light aircraft and you can charter a plane to fly you in.

Yes, you should, Amboseli is a must. The views of Kilimanjaro with elephants in the distance make it worth the journey alone. Then add how easy it is to get to and the nature of the park with its culture and historical elephant research and you end up getting a real safari in today’s world, rather than one that is lost in time.