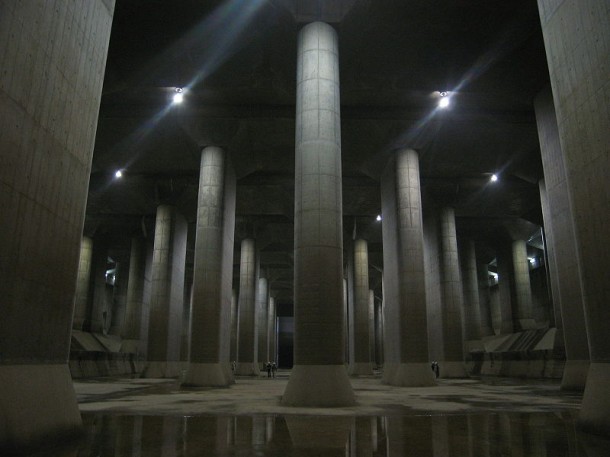 Imagine a cross between the “Temple” and “Basement” levels from N64’s Goldeneye; that’s what you can expect to see when visiting the Metropolitan Area Outer Underground Discharge Channel, also known as the G-Cans Project.

For generations the Tonegawa, Arekawa, and Edogawa Rivers have been terrorizing the people of Greater Tokyo with their periodic overflowing. Finally, in 1992, the Tokyoites said no more and began building the G-Cans Project began to protect Tokyo and nearby regions from monsoon flooding.

This 2 billion dollar infrastructure marvel is composed of over 6 kilometers of tunnels, buried 50 meters underneath Kasukabe (a suburb of Tokyo). The tunnels connect 5 containment silos that act as flow regulators. At the end of this network lies the main tank—the pièce de résistance of the whole place.

Measuring 177 meters in length, 78 meters in width and 25 meters in height, the main tank could hold 50 Olympic size swimming pools and conceal over a dozen Cougar Magnums. Fans of the Portal series may also feel the urge to run through walls, but this is not a good idea.

The main tank contains 59 pillars that are connected to a number of pumps that can pump up to 200 tons of water per second into the Edogawa River.

Together, these components act as the city’s drain and reduce the overall flooding affect by 80 percent.

During favorable weather conditions, this vast underground system is opened up to tourists, where you can take revenge on the Japanese by taking excessive pictures of THEIR land marks.

Best Time To Go To the G-Cans Project

Avoid going during June and July, which is when the rainy season in Japan is expected as this can be a little uncomfortable, or dangerous.

The John Galt– Feel the appreciation for human achievement flow through your veins. None of the “destroyers” will understand what you feel as you gaze upon the giant iron beams of Japanese glory. After witnessing this marvel, no bragging words shall ever need to leave your mouth for others to feel your superiority. Your gait will say it all.

Cost To Visit The G-Cans Project

The best kind of Cost: Free.