The yin & the yang, the ball & the cup, the Tom & the Jerry, they all represent the eternal concept of balance that lies at the heart of our quest for the enlightened life. This notion of balance should be in the minds of all adventure travelers, because as the saying I just made up goes:

Is a repetitive adventure, really an adventure at all?

While Buenos Aires features many diverse spots where you can tango, eat and bask in the festive atmosphere, here we will take a closer look at a couple of the city’s lesser-known attractions.

What’s a good place to start a family but not take one to?

Anyone who’s watched enough latino day time TV should know that their views on sex sway to the ¡Ay, caramba! side, so it should come as no surprise to learn that sex hotels—telos as they are known to the locals—are not uncommon in this city of 10 million.

To understand why, we need to briefly look at the history of Argentina. As a result of economic mismanagement, corruption, and, arguably, the work of economic hitmen, Argentina has been plagued by rampant inflation since the mid-1970s. It’s not easy living in a country where you don’t know what the price of Us Weekly is going to be next week, and when that goes on for 25 years, it has serious consequences on the population.

Just 10 years ago, the unemployment rate in Argentina stood at 20%. While this figure has fallen as the country stabilized over the last decade, the combination of high inflation and high unemployment has left a generation of young adults without savings, stuck living at home. As a result, in Argentina, it is considered normal-ish for children to live with their parents until 30 or so.

Yet, people still have needs, whether they’re living at home or not. To satisfy those needs without the risk of dad walking down in his underwear, young adults head on down to their local telo where they can rent a room for the night, or for an hour, to fulfill their wildest pleasures or most awkward moments.

Here are a few good telos in Buenos Aires:

Located on the city’s periphery, Los Jardines de Babilonia is your best bet if you have a history fetish. Rooms with large columns and giant horse carriages can be yours. 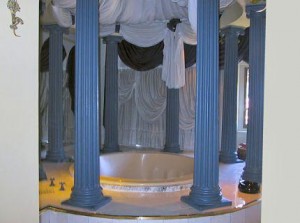 Located in the heart of the city, Hotel Pink has five different room categories for you to choose from. While category 1 rooms will get the job done, going up in categories will let you stretch you legs a little more. The higher category rooms have more nooks and crannies for you to truly test the limits of you sensual creativity. 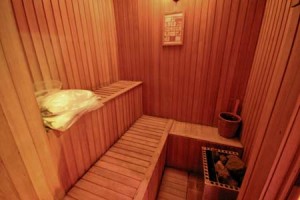 These guys know what you need. Contemporary and clean rooms make Hotel Nos one of the top destinations to engage in your favorite euphemism for horizontal dancing. If you don’t plan on visiting this establishment you should—nay, you must—go to their website, which is an adventure in and of itself.

After a night of carnal desires you may feel the need for a little piousness. But if the musky aisles of a church don’t resonate with you, don’t worry, Buenos Aires has you covered. If your idea of religion involves beer and shwarma, head on down to the shores of Rio de la Plata for a truly unique day at the Tierra Santa theme park.

There’s only one place in the greater Buenos Aires area, or the world for that matter, where one can witness a 60 foot plastic Jesus resurrect every half an hour. Tierra Santa theme park is that place. 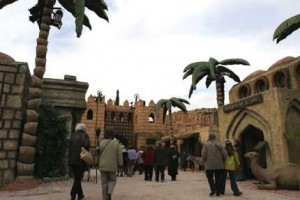 Parque Tierra Santa was built in 2000 as the world’s first religious theme park and transports you back in time to Jesus’ hood. The park’s attractions are divided into more than 35 events pulled straight out of The Bible. Most of the events focus on the life of Jesus, and another few give shout outs to “those other religions”.

Globetrotting blogger, Isabelle Lagarde, gave a pretty accurate review of the place on her visit there:

After a brief saunter through the stucco cave entrance, passing small displays of Christian pre-history, we arrived in the main cavern where we sat with the masses and awaited the show. In the dim light we waited, listening to the quiet choral music and fake bird chirps, till another tired looking Roman announced that the birth of Christ would be delayed a further five minutes due to technical difficulties.

After an underwhelming performance by a mechanical Mary and Joseph, we emerged back into the light just in time for the first resurrection of the day. We climbed Crucifixion Mountain, where a brief trek takes you on a whirlwind tour through the death, burial, and resurrection of Christ. The gruesome theme is a bit diluted by the fact that in the distance is an enormous water park which abuts the theme park and adds a backdrop of water slides to your foreground of crosses and mourning mannequins. Beneath the constructed mountain is an interesting grotto dedicated to various Mary figures from around the world, including Mary who unties the knots, which was a new one for me.

In the end, the park’s surreal existence may leave you with more questions than answers on your way out. But maybe, just maybe, that’s what they wanted.

Argentina’s peak season is between the summer months of October and March. So, if you’re going to Buenos Aires strictly for the telos and Tierra Santa–in which case, god help your soul–then aim to avoid the peak season to save on travel costs.

The Gay Republican – An experience so contradictory in nature that your friends are sure to ask a few questions.

Depending on the quality, telo rooms can run between USD30-120 for a 2-3 hour stay. Getting into Tierra Santa will set you back about USD10.