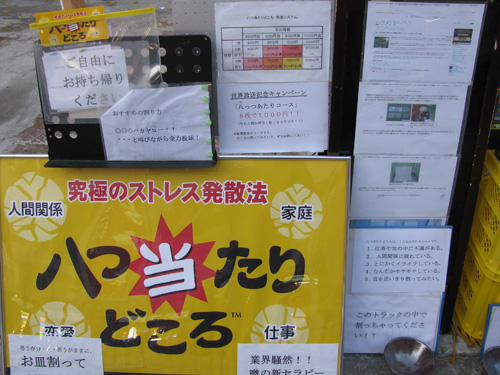 There are some drawbacks to being civilized.  The biggest one is that going ape-shit is a big no-no.  But, there are times when all you want, nay, need to do, is destroy some stuff in a fit of rage.  While other people shun away from that, and repeat “goosefraba” over and over to themselves, in Japan a well-channeled outburst of destruction is seen as a therapeutic act.

Instead of smashing your neighbors’—or worse, your own things—you used to be able to The Venting Place in Tokyo’s Akihabara district and wreak havoc on the cups and plates that are available for your pleasure.  For a small price, you can break some fragile stuff, leave a mess, and walk out with a giant grin and much-needed energy to face your 4-month divorce procedure as it consummates in ultimate financial ruin.

Rage Rooms are all the rage

These so-called “Rage Rooms” have since spread all over the globe, despite the fact that The Venting Place in Tokyo is no longer around.

Here are some examples of other rage rooms you can visit:

Rage rooms have come to Los Angeles with Rage Ground and you can visit them today to take out all your anger on something inanimate!

Of course, Sin City has to have the weirdest of options, so it’s no surprise they have a rage room as well!

The big apple can’t be outdone by the west coast competitor LA, so you can also get your rage on at the Rage Cage!

Even though the people of Singapore are renowned for their politeness and being a little withdrawn, they have still embraced the rage room concept.

Maybe the Brexit is still pissing off a few Londoners! If so, then the Wreck Room is a great place to book a smashing session!