Brighton, England isn’t the first place that comes to mind when you think of surfing. There are no palm trees, crystal clear water or year-round sunshine, but on a good day Brighton can throw up some decent waves without the large crowds of better-known surf destinations. It’s also a great place for a day out from London too.

With its laid-back beach vibes, banging party scene, and vibrant art community, Brighton’s seaside charm is finally being noticed by offbeat travelers and surfers. So if you interested in catching some waves while visiting Brighton, these are the best surf spots to check out:

Brighton Marina is one of the few waves in the city with enough power to warrant a shortboard. Unfortunately, everyone knows it. The break is sheltered from strong south-westerly winds by the marina wall and offers some great fast waves when everywhere else is blown out. Be warned that it breaks on a fairly shallow chalk reef and is not really suitable for beginners. Also, you need to respect the locals!

One of Brighton’s classic surf spots which has been ridden since the 1960s, the West Pier is a slow, gentle wave in the city centre breaking at low- to mid-tide. It tends to work best after a big south-westerly storm once the winds have died down. Owing to its lack of power it’s best for longboarders and beginners. The quality of the waves really depends on the changing sand banks, which to be honest, haven’t really been the same since the West Pier burnt down.

Just outside of central Brighton, the Hot Pipes is a gnarly reef break in front of Shoreham power station. To get there, just drive towards the giant power station chimney. The wave only breaks for a couple of hours around mid-tide onto the concrete pier covering the ‘hot pipe’ so you need to be prepared. But it’s worth it, as on a good day it’ll throw up some fast, hollow waves with a decent air section. Not really suitable for beginners!

The Wedge is Brighton’s premier bodyboarding wave, breaking off a large groyne in the centre of town. It works best at mid- to high-tide on a south-westerly swell, when the waves surge off the wall to create a short but intense barrel. Experienced short boarders might want to try it out too, but can be a bit of a ‘board-dinger’, as the wave sometimes breaks straight onto the pebbles.

Brighton generally works whenever there’s a strong south-westerly wind blowing, which in autumn and winter is quite often; in the summer when there’s high-pressure overhead you might go weeks without surf. It also occasionally gets some clean groundswell pushing up the Channel but this is quite rare.

A whole lot more than just waves, there are lots of things to do in Brighton. So, don’t be shy, you can come for a longer period and really enjoy the area. 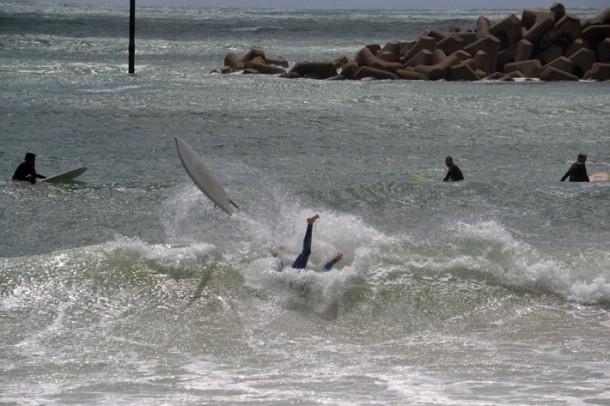 The Easygoing Chap – Brighton may not be California, but thanks to its relaxed atmosphere, penchant for alternative free-thinking, and bohemian atmosphere, the city draws many comparisons to San Francisco.  There is no shortage of new sites to see and things to do if the weather doesn’t facilitate surfing.

Extra bragging points if you catch a wave at ‘C’s Corner’. This wave, which breaks off the groyne next to Palace Pier, offers possibly the shortest ride in surfing history. If you’re feeling foolish you can try to surf it all the way under the pier.

Matt Lindley is a London-based blogger and bodyboarder who’s originally from Brighton and misses its surf – even if it’s not California.