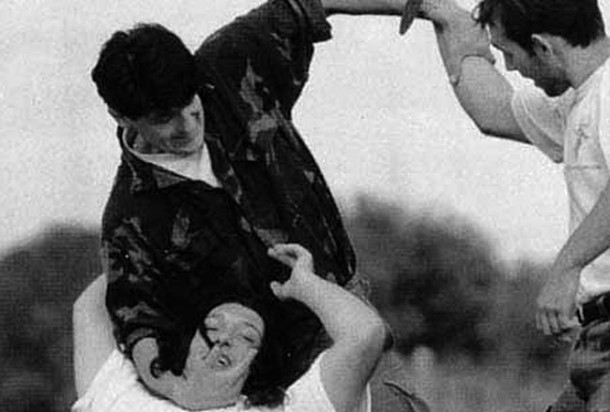 Tyler Durden said it best when he asked, “how much can you know about yourself, if you’ve never been in a fight?” Admittedly, the narrator did have to shoot himself in the face just to get rid of Tyler Durden’s philosophy about the world, but we still think Durden had a good point.

A fight is something spontaneous, requiring you to act quickly using your instincts and mind. But for most of us, years of comfortable, predator-free existence has left us defenseless and soft. You may think that you don’t fall into this category because you go to the gym and have a body fat percentage of less than 2%, but when push comes to shove, will you be able to curl your way out?

This is where Russian martial art, Systema, differs from other workout regiments. Systema (the system) doesn’t hand out striped belts or require you to pass any tests. It just pretty much kicks your ass until you can defend yourself.

Systema is a self defense training system headed by Michael Ryabko and Vladimir Vasiliev. The two men have served as Russian special forces agents so we won’t be saying anything even remotely sarcastic about them here.

The system is loosely based on Russian folk styles of fighting that have been around since the 1st millenium but mostly forgotten after they were banned during the Soviet era.

One of the main themes of Systema is training yourself to relax in high-stress situations. It’s a natural reaction for most people to tense up when they are about to be on the receiving end of a strike. However, Systema teaches to do the exact opposite. The idea is that by relaxing your body you are better able to distribute the force of the strike.

Systema classes consist of four types of training: warm-up exercises, hand-to-hand combat, ground fighting, and weapons disarmament. Here’s what you will learn in each type of training as stated on Systema’s international headquarters website:

Specialized military exercises will “enable you to achieve complete physical warm-up and energy balance in just a few minutes. Previously known to Russia’s secret groups only, these exercises will not only give you strength, flexibility and endurance, but also a high level of awareness and confidence. Combined with one of a kind Russian Breath Training, these exercises provide the true foundation for every physical activity of your life.”

Hand-to-hand combat exercises are designed to teach you a “multitude of fascinating drills and ideas, ways to develop endurance, sensitivity, striking power, unique use of the body for defense and attack, and total control of any empty-hand attack with emphasis on breathing, continuity, economy of motion, and unpredictable moves.”

Ground fighting exercises will “train you to overcome any conceivable attack from all angles and positions, defeat multiple attackers and disarm weapons – all from the ground. You will learn how to fight from the ground unarmed against one, two and three opponents who try to grab, choke, kick and punch you, stab you with knives, immobilize your limbs, have you mounted and then try to shoot you in the head or cut your throat. You will also learn the tactics to develop breathing, avoid injuries, maximize your body and strengthen your psyche. From basic form and movement progress to the exceptional dynamic free-flow drills, unlock your ultimate potential and free yourself from the worst opponents – fear and tension.”

Weapons disarmament will instruct you in “unique uses and defense against a knife, stick, or a gun. You will learn to gain complete control of single or multiple armed attackers and master both the fundamental and advanced tactics while empty-handed or armed yourself. You will also explore the incredible ways of turning common items in your surrounding into highly effective tools of protection.”

Systema does not have a set kata–a pattern of set movements–which to some critics of the martial art makes it less practical than traditional fighting styles like Sambo and Jiujitsu. Proponents however, point out that Systema isn’t designed for competitive fighting, but rather special situations (like protecting yourself from Hug Thugs) and training your mind and body.

This 2-minute video sums everything up nicely:

Systema schools exist in a number of countries around the world, including Australia, Brazil, US, UK, Russia, and others. However, the most authoritative schools are located in Moscow, Russia and Toronto, Canada—this is where Systema founders,  Mikhail Ryabko and Vladimir Vasiliev, teach.

Adventure travelers looking for a crash course in Systema training should check out when the next available Systema Camp is being held. The Systema Camp is a weeklong event where students of the martial art are taken out into the Canadian wilderness—so that no witnesses are around—to be trained in the system from early morning to late-night. You’ll stay in wood cabin bunks with 8-12 people, and spend the day working with peers on your breathwork, fundamentals, strikes, movement, survival, fear, opponent control, and conditioning.

You don’t need to have experience to attend, but it is suggested that you at least familiarize yourself with some of the organization’s instructional films and/or Vasiliev’s book, Let Every Breath…Secrets of the Russian Breath Masters. You must also be at least 18 years old and able to hold back tears.

Systema classes run year-round. week-long camps are usually planned for summers, but check with the Systema site for official dates and schedules.

The Happiest Punching Bag – Your friends may never understand the joy of being tenderized like a round steak by a bunch of Russians, but hey, there’s nothing you need to prove to them.

Check out these insider insights from Systema masters: