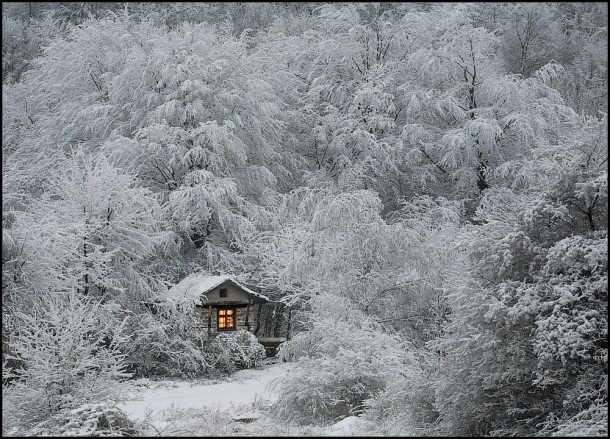 Most men lead lives of quiet desperation and go to the grave with the song still in them.
-Henry David Thoreau

As the will of the world beats against the doors of your consciousness you may look at it and say, “you are so small and insignificant. You pose no threat to me.” But one day, in the middle of Dancing with the Stars or Monday Night Football, you might wake up and realize that you know more about these shows than you do about yourself.

You may realize that your thoughts are filled with logos and products and that your body has become addicted to the taste of fried food and caffeine. You may take a look around and realizing your home is in on it, aiding and abetting your sins of perpetual escapism and distraction. You may even smile in acknowledgment of the irony that your search for ease and comfort led you to a tedious and cumbersome existence. And as you stand on guard at the gates of your mind, you may just get the sense to turn around and see that your closely guarded realm of dreams and aspirations has been leveled and that society’s will has been entering your kingdom through the back door the entire time.

If you are plagued with existential questions concerning your purpose in this world and the autonomy of your being, then perhaps you might want to consider joining the world’s hermit community. Hermits come from different backgrounds and possess diverse reasons for their withdrawal from society. To help determine the type of hermit lifestyle best suited for you, consider the following options:

Contents hide
1 Cave Living: For the Primal Hermit
2 Shack: A Hermit Classic
3 Boat: For the Adventurous Hermit
4 Anchorhold: For the Dedicated Hermit
5 Tiny House: For the Non-Hermit Hermit

Cave Living: For the Primal Hermit

Human life may not have survived on Earth if it wasn’t for the shelter made possible by caves. According to recent studies, the population of our ancestors dwindled from tens of thousands to less than a thousand during a glacial period beginning 195,000 years ago. The lucky (or smart) ones survived by seeking shelter inside caves on the South African shore. Caves made it possible to escape harsh conditions and danger, store necessities, and maintain fire.

For those yearning to reconnect with their hunter-gatherer roots, caves are a natural source for undisturbed reflection and primal living. Being surrounded by darkness, free of mortgages and looming bills, should clear enough mental real estate to help you evolve in the direction you seek. Moving from condo to cave means leaving behind 99 percent of all your possessions while defining the few necessities that you will need.

A local body of water is obviously important for providing hygiene, food, and water. The other things you want to consider are your sleeping space, ability to cook, and ability to endure the weather. Objects of necessity are going to vary with your desire for incorporating man-made tools in your seclusion. I would suggest consulting various wilderness survival checklists and guides before you begin your flight into the wild.

The SAS Survival Handbook written by John Wiseman has been an authoritative text on the subject for over 20 years. Identifying and Harvesting Edible and Medicinal Plants in Wild (and Not So Wild) Places is another informative read that will save you years of trial and error.

For those who do not want to explore the physical challenges of cave life but still seek recluse and solitude, perhaps a shack or small cabin would be more fitting. Many men have retreated to ascetic dwellings—away from worldly distractions—to put their life’s work on the main stage. In order to concentrate on his writing, Henry David Thoreau spent two years in a self-built cabin that served as an experiment in simple living and self-sustainability. The cabin cost Thoreau $28.12 and was as furnished with a bed, table, small desk and lamp, and three chairs. Ted Kaczynski, though not exactly the greatest role model, spent over 20 years in his infamous Montana cabin working on his manifesto against the industrial-technological system and adding to his arsenal.

Swedish company, Arvesund, created the Hermit’s Cabin specifically to support the single person who seeks stillness and solitude. The Hermit’s Cabin comes in two models and can be bought furnished with a chair, table, bed, an open wardrobe, and stove.

Boat: For the Adventurous Hermit

Living on a boat offers a sense of peace as well as the prospect of adventure and freedom to roam. It is an ideal lifestyle for reclusive types who wish to explore their inner state while exploring the many shores of this planet. To live at sea is not easy; it requires technical knowledge and experience.  Most people suggest taking the time to do ample research before making the transition, and to try out the lifestyle on a part time basis close to shore before committing to any long term moves. There are many websites on the Internet that can help you identify the first steps to transitioning from land-based to a nautical lifestyle.

As this couple demonstrates, it is possible for two ordinary people to traverse an entire ocean by boat if the will exists.
[iframe][/iframe]

Anchorhold: For the Dedicated Hermit

If you are the type of hermit who enjoys commitment then an anchorhold may be the right fit for you. Anchorholds are small cells that were built against church walls throughout Medieval Europe. Anchorholds were constructed in order to house anchorites, a type of religious hermit who withdraws from society in order to dedicate life to prayer and God.  Once the anchorite would take up residence, the anchorhold would be permanently bricked up and the anchorite would remain in the cell for the remainder of their life. Anchorholds would contain several small windows through which the anchorite could receive food, pass waste, and communicate with the outside world, though we’re not sure that that is much of a selling point.

Tiny House: For the Non-Hermit Hermit

Charles Caleb Colton said that the man “that has little and wants less is richer than he that has much and wants more.” The reason why many people feel stress and unhappiness is because they get stuck working to keep pace with the financial demands of their lifestyle. Furthermore, people don’t generally become happier with more money because they simply increase their consumption, creating even more pressure on themselves to maintain that higher consumption level.

Jay Shafer used to be part of the rat race, working as a grocery store clerk to sustain his level of consumption. At the age of 35, Shafer decided to reinvent his life from working for the sake of making money to actualizing the things he wanted to do. Shafer set out to build his first 89 square foot home with the goal of reducing his consumption and waste. Upon moving in, he found that the reduced upkeep of his smaller home afforded him the luxury of a simpler and stress-free lifestyle. Without his usual financial demands (he had no mortgage on his new house and his utility bill was $100 per year) he was able to quit his job and start the Tumbleweed Tiny House Company, a company which now features tiny house models ranging from 65-874 square feet.  Tumbleweed houses cost on average about $50,000, and can be bought for half that if you are ready to build one yourself.

Tiny houses help you live a simpler life and reconnect with the natural world by reducing the amount of things you believed to be necessities. Mobile models have the added benefit of allowing you to travel while keeping the comfort of your home. With mobile Tumbleweed Houses you can choose to be a recluse and live away from others or explore different communities and lifestyles. Tiny homes have many advantages, but perhaps the most significant one is the chance to break free from the habits that have lead you to become worn-out and helpless.

If one advances confidently in the direction of one’s dreams, and endeavors to live the life which one has imagined, one will meet with a success unexpected in common hours.
-Henry David Thoreau

If you’re looking for the exact opposite of this article, check out How to Meet New People At the Bar. And say hi to us on Facebook.