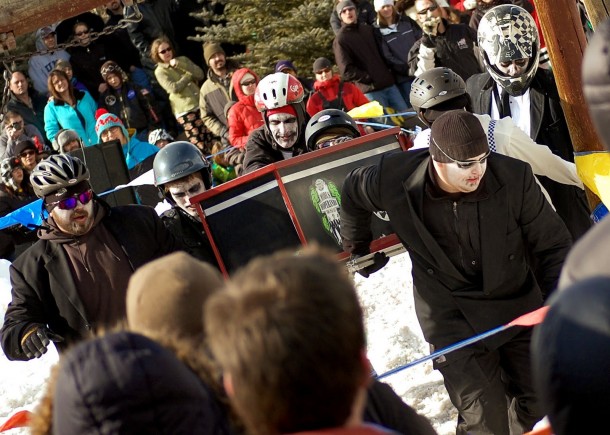 While some like to escape the dreary tolls of winter by jetting off somewhere they can sip piña coladas by the pool, there are those that would much rather convince six of their friends to dress up as Elvis and drag a coffin through the cold, muddy terrain of Nederland, Colorado.

The Frozen Dead Guy Days is an annual festival held in the small town of Nederland, Colorado (pop. 1400) that commemorates -of all things- a cryogenically frozen dead guy.

The cryogenically fozen dead guy is Bredo Morstøl, father of eccentric Norwegian immigrant, Trygve Bauge. The legend goes that Trygve and his mother Aud, kept the frozen body of Morstøl in a shack behind Aud’s house until they could find a permanent cryogenics facility for the body. However, before they could find a permanent place, Aud was sent an eviction notice for living in conditions that violated city ordinances. In her plight she told a local reporter about the frozen body she was storing behind her house and word would eventually spread to city hall.

The story became a local sensation, overshadowing the town’s previous scandal of “who stole the bicycle behind Jim’s shed” – the town has 1400 people for christ’s sake. Once the story broke, the town banded together to build a permanent home for the frozen dead guy.

In honor of their peculiar dead resident, the town holds an annual celebration affectionately referred to as the Frozen Dead Guy Days.

Frozen Dead Guy Days is celebrated on the first full weekend of March and features a number of events.

Events include a tour of the Tuff Shed where Grandpa is still frozen, a “polar bear plunge”, a dead guy parade, and the “Grandpa’s Blue Ball”-a dance for the frozen and the dead.

But the main event of the celebration is the coffin race. The coffin race is a gritty contest where six pallbearers (team members) carry one rider inside a coffin through an obstacle course that features snowy hills and a jungle gym. The winning team is the one to emerge out of the obstacle course with the fastest time. The top four time teams race in the quarter finals, top two from that heat race for first and second place. Costumes are allowed and encouraged; barn animals, Elvises (or is it Elvi?), and Marshmallows have all been seen carrying coffins in the race. If you are interested in signing up you and your friends for the next coffin race, check out this site.

The Wandering Hipster – When your friends ask you about your trip, you’ll be able to condescendingly smirk and say “no, not Netherlands, Nederland, Colorado…you’ve probably never heard of it.”

There is a small fee to participate in the coffin race (about $35-50).