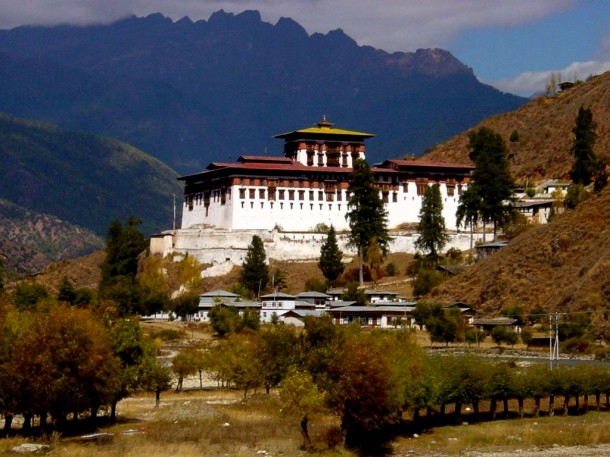 Ugh, Kashmir is so 2010. Mainland China? You mean Mainstream China. Haven’t you heard? Bhutan is the new Nepal.

Located in the eastern end of the Himalayas, Bhutan is a remarkable and rare destination for adventurers seeking wisdom, inspiration, solitude, and happiness. While the industrialized world has placed great emphasis on production and technological progress above all else, the Bhutanese have followed the Buddhist path of seeking harmony with nature and traditional values –yeah, kind of like Avatar.

As a result of this ethos, Bhutan’s lands remain largely untouched by mankind, and the country harbors some of the most exotic species of plants and animals in the world. Ignoring the whole nature stuff though, Bhutan is still a remarkable place to visit because of its designed isolation.

Bhutan is one of the only countries which has been independent throughout its history, never conquered, occupied, or governed by an outside power. The country survived internal rivalries, Mongol and Tibetan attacks, as well as threats of occupation from China and Britain.

However, at the turn of the 19th century, Bhutan came close to losing its immaculate record of independence. Britain, which controlled India at the time, was becoming a powerful regional power. China, fearing that Britain would encroach on its Tibetan claims, invaded Tibet in 1910, and laid claim to Bhutan, Nepal, and Sikkim. In response, the Bhutanese government signed the Treaty of Punakha with British India, which guaranteed British support for Bhutanese Independence in exchange for Bhutan taking a political stance favorable to Britain. This was a good move for Bhutan as China did not have the will to challenge the British over this issue and acknowledged Bhutan’s independence -Tibet however, wasn’t as lucky.

Bhutan’s historic independence isn’t the only reason for its isolation. Bhutan has no railways and it closed its borders to its Northern neighbor, China, in the 1950’s. Moreover, tourism to Bhutan was closed to foreigners until 1974, and today remains heavily restricted. Fewer than 30,000 visas are issued per year because of limited flights and accommodations inside the country. The visas are also rather pricy for most; expect to pay $200 per day for permission to stay in the country.

Further compounding the difficulty for tourists to get into the country is that the only practical way to get into it is through Paro Airport, which has been described as one of the most difficult airports to land on. Watch a landing video here.

However, if you are fortunate enough to get past all the red tape and barriers of getting into the country, you will be witness to a rather unique culture.

Bhutan’s unique culture is a result of its conscious efforts to develop independently from the rest of the world. This ideal was best embodied by the country’s former king, Jigme Singye Wangchuck. Crowned in 1974, Wangchuck pursued numerous policies that while seeming unorthodox to many westerners, earned the love and respect of his people. Perhaps the defining policy of the king’s rule was the introduction of Gross National Happiness (GNH).

While most countries in the world judged the level of their welfare by the amount of output produced (as measured by Gross Domestic Output), Bhutan’s king wanted a more holistic measure of the wellbeing of the country’s citizens. The creation of the GNH meant that Bhutan’s policies for the past quarter of a century have been aimed at preserving the nation’s happiness rather than the growth of its economy. This has led to Bhutan developing many different societal attributes than most other countries. Here is a list of several intriguing facts about Bhutan:

So, while visiting the country is difficult, Bhutan is a unique opportunity to see one of the last bastions against a money-driven world — the other option being North Korea. You can check out some tour packages to Bhutan here.

For those betting on the end of the world in 2012, Bhutan is likely to be right up with the few places to be spared. Its buddhist culture has been accumulating karma for centuries, while its high Himalayan altitude is surely to protect its inhabitants from a global-warming fueled disaster. These factors make the $6,000 cost of visiting Bhutan a worthwhile investment.

Spring or fall are the most popular times to visit due to the weather and festivals. You can check out the full listing of festivals here.

The Very Important Proletariat – The fact that so few people get to visit the country and that all visitors must be accompanied by a guide makes Bhutan more exclusive than Lady Gaga’s sex dungeon.