The Memorial To The Murdered Jews of Europe, also know as The Field of Stelae is located in the heart of Berlin. This is not one of those memorials about which you can ever truly say that you’ve seen it. Not because there are 2,711 giant blocks forming a grid over 19,073 square-meters in size, but because this memorial is something that you need to experience, rather than see, to appreciate. Should you have trouble imagining a grid with 2,711 blocks, just mark a dot on your kitchen table representing yourself, and spill half a cup of rice over it.  That should give you a fairly good scale model of the memorial.

While the average tourist frantically runs around the city taking pictures of everything even remotely touristy, try instead going for a walk through the alleys of the Field of Stelae. There, you will quickly discover that there is enough space for only one person to walk the passage ways.  After a few more minutes, you may realize that both light and sound somehow fade away. So, while there is no symbolism employed and no significance in the number of blocks used, the design alone is enough to provoke those feelings and experiences that the architect intended.

Peter Eisenman – the architect of the Field of Stelae, felt that everyone should experience the memorial individually. And this forced, rather than chosen isolation, deprives and victimizes the visitors. The ground is uneven, with hills and dips, and the blocks’ height ranges from flat in the ground, to 4 meters. Thus some parts are darker, quieter, and colder than others, and inside visitors find themselves disoriented and uneasy as they walk alone through the towering slabs. In some ways, on the most minute level, they can relate to the restrictions Holocaust victims endured. 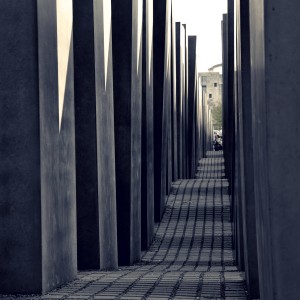 The memorial is a very controversial topic. It was chosen over hundreds of other designs, cost 27.6 million Euros, and was placed in the middle of the city. The location was selected to be in the vicinity of embassies, cultural institutions, businesses and residential areas; emphasizing its very public nature. But this same prominent location, is what offends those that see it as blemish on the face of new Berlin, reminding everyone of a past they would rather forget. And Berlin really is new today; with fresh ideas, a different culture, and a redesigned city – a city that was estimated to be 80% destroyed after the war.

The themes of openness and transparency influenced the city’s new architecture and design, and the way that the public interacts with it. Freedom of speech is a valuable re-acquired right of every German citizen, and support groups or protests for one cause or another are quite common. Often however, so is vandalism. The slabs in the memorial are therefore coated with an anti-graffiti substance made by Degussa, which makes it easy to remove the occasional derogatory message or swastika.

Here’s a little interesting bit for you: Models posed in the memorial for EasyJet’s in-flight magazine, in an effort to highlighted some of Berlin’s iconic landmarks. The piece was found offensive, and EasyJet was forced to withdraw all 250,000 copies of it’s in-flight magazine. That doesn’t sound too strange, until you learn that Degesch – a subsidiary company of Degussa (the anti-graffiti substance manufacturer), had produced the Zyklon B gas used to poison people in the gas chambers.

Yes, the very same victims the Memorial To The Murdered Jews of Europe is dedicated to! So it’s kind of like receiving a welcome-mat from the person that burned down your house. And while hypocrisy is always something to giggle about, it will be the last thing on your mind as you walk the Field of Stelae.

Any time is good.  If the weather is warm enough for an early evening walk, go as the sun begins to set. You’ll experience the biggest contrast between the dark isolated parts, and those areas, from which you can get a glimpse at the setting sun. And during the winter season you’ll experience an eerie silence if you go during a snowfall, which can muffle sound even near a busy street. The Field of Stelae is has no set entrance or exit, and because of its large size, you can easily lose sight of any groups of tourists.

Nascar Driver Status – 10,000 people per day have gone to see this memorial the year it opened to the public (back in 2005). And while most people that have visited Berlin have seen it, a surprising amount didn’t know enough about it to have walked through it. So when you talk about your experience, you are sure to get a few interested looks, but their eyes will soon dull over, and you can’t blame them. After all who wants to listen to you talk about your feelings? No, this one is for the soul.

Here’s the homepage for this project

And a panoramic ‘walk-through’ from inside the memorial