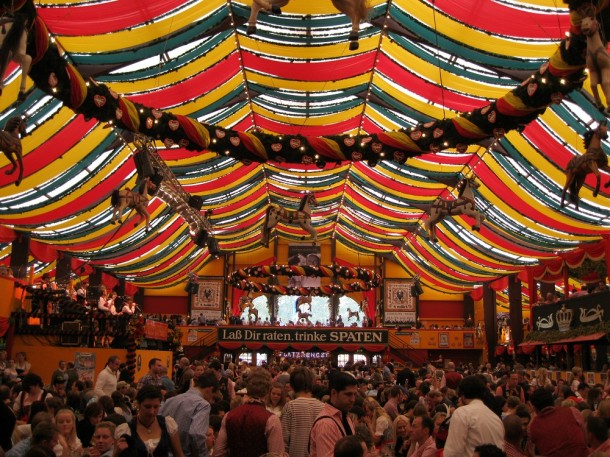 Oktoberfest, known by many as the most unforgettable event they don’t remember, is an annual two-and-a-half week festival in Munich where boisterous Bavarians and trepidatious travelers get together to let down their hair, pull up their stockings and drink, drink, drink.

A defining feature of Oktoberfest is the 34 beer tents that surround the inner pathways of the festival’s grounds. The festival grounds–or the  “Weis’n” as they are called by the locals–offer a variety of sites and sounds for thirsty travellers, but one attraction that visitors should make special arrangements to see, is the Hippodrom.

The “Hippodrom” was first opened in 1902. It was the first “stall” on this festival, which had the permission – besides selling food and drinks – to also present entertainment. Inside the tent there was a ring in which 25 horses had to carry the visitors around the tent. The entertainment was perfect, because for most of the people it was their first try on the back of a horse.

There is no horse-ing around at the tent any more, but management has put in considerable effort to make the Hippodrom a top-notch experience for its guests.

The Hippodrom is one of the first tents you see as you enter. Its beautiful red and yellow exterior won’t be hard to spot, but come too late and getting to see its interiors might be wishful thinking.

Beers served at the Hippodrom include the Spaten Brewery’s special festival beer, non-alcoholic draught beer from Löwenbräu, and Franziskaner wheat beer. Despite the fact that the beer hall seats over 3,000 guests, the Hippodrom has been described as a place that is cozy, flirty, and fun.

In that sense, the Hippodrom is a great venue to shed your inhibitions and give in to the benevolent aura of the Oktoberfest festival. In other words, be prepared to experience a baptism through beer.

This depends on your wallet. Like restaurants, similar peak hours apply, and during the peak hours, the minimum purchase requirement is doubled. Still spending an extra 30 euros could be worth it, to enjoy ‘the flirtiest’ tent on the grounds. The 2011 season started Sept 17th and runs until Oct 3rd. Doors open at 10am and the tent is active till 11:30pm (though doors close a bit earlier).

High-School Quarterback – People will always listen to a good party story, and how much beer you drank. Extra bragging points if you recognize any celebrities in the crowd, or hook up with a hottie.