Saltwater fishing is loved by millions far and wide, all over the world. Have you ever been to the ocean? Saltwater fishermen and anglers are everywhere! Now, if you are an avid hobbyist, don’t get offended: we are well acquainted with the allure of the ocean. Vast open spaces, the horizon staring back at you, endless possibilities of fish to catch, the healthy air full of salt on your skin…

In fact, we love saltwater fishing so much that we compiled a list of the most prized oceanic fish. Take out your notepads, folks: this is the ultimate top ten ranking of saltwater catches. Don’t let the opportunity pass you by! 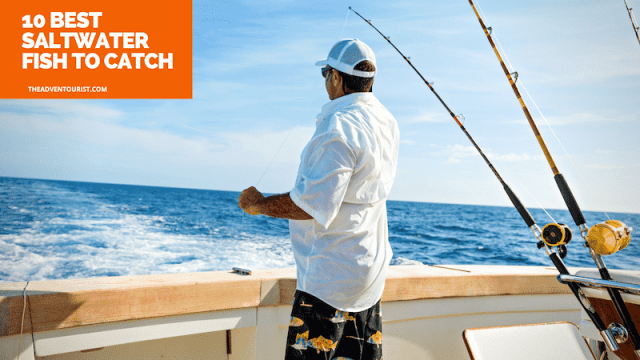 The 10 Best Saltwater Fish to Catch

This silverfish has bluish and green hues on its back, a long snout that helps it find its food (such as shrimps and bugs), and incredible eyesight. Though this is good for the fish, it certainly does make catching them an easy job.

Do you ever have dreams of fish that come right up to the bait and let you reel them in? Yes? Well, you can forget about those with the bonefish. This shallow-inshore-water-dwelling creature averages 5 pounds in weight but makes up for it with great catching difficulty. It’s shy and reticent, which means you need lots of patience and talent!

Tuna is one of the most common fish at the dinner table, but what most people don’t know is that many tuna varieties are exceedingly hard to catch. Within the fifteen-species group that is tuna, the most prized among fishing enthusiasts is the Bluefin Tuna.

This king among fish lives in both the Atlantic and Pacific Oceans, as well as in the Mediterranean Sea. If there is any word to describe them accurately, it might very well be “robust”: one specimen can weigh up to 250 kilos (that’s 551 pounds) of muscle, and their super-efficient oxygen delivery organs help them swim surprisingly fast. The Bluefin Tuna is the whole package: pretty quick, pretty intense, and very, very tenacious fighters.

Tropical waters are home to myriads of organisms, from microscopic bacteria to the heavyweights in the fish family. The dorado belongs wholly in the latter category! Not only is this species flashy, donning vivid yellow, green, and blue tones, but it is also fast (at 92.6 kilometres per hour) smart! They evade, escape, and hide, making they good game for patient fishermen.

Sometimes called mahi-mahi (Hawaiian for “very strong”— yes, for real), this fish lives in warm waters all over the world, including the Caribbean and tropical areas off the coast of Central America, Asia, and Africa.

The Giant Trevally is a wide-swimming fish species that ranges from Africa all the way to Japan and the Hawaiian islands. It’s big, it’s heavy, it’s an apex predator: these qualities make this fish a valuable catch. The best way to go after a hefty (top at 80 kilos) Giant Trevally is to use topwater lures or very long reels. Beware: it’s a long-enduring species!

Famous in songs and popular culture (Disney films, anyone?) for a mean and combative disposition, Barracudas are actually every bit as ferocious as their fictional portrayals. This is what makes catching them such a rewarding prize!

The barracuda’s snake-like body extends up to 165 centimeters— 65 inches— long. That’s more than some humans! They also have pretty big fanged teeth. Which they might just use to hold onto your line. Fingers crossed.

Another catch-worthy tropical species is the Tarpon, a (sometimes) 8-foot-long fish that is very resistant to variable water conditions. Why is it a good sport? It’s enduring, hard to get on the hook, and— not at all majestic— can jump putting its whole body out of the water.
Fun fact? When it lays eggs, the female tarpon can produce 12 million in one go! Hopefully, that means lots of tarpons to try and catch.

Arctic Char. The name itself sounds badass. What is this species? As you might have guessed, it inhabits the cold waters around the pole, as well as lakes high up in the mountains.

By being patient and, when the time comes, moving quickly, you might succeed in catching this wily, cold-resistant fish. When found, you can see its pretty red and pink dotted colouring. Even that alone makes the whole process satisfying!

These beautiful predators, also known as broadbills, swim in many oceans: Atlantic, Pacific, and Indian! They migrate great distances and can reach 3 meters in length (just a bit under twice your size). Hard to catch? You bet! The swordfish is a pro at not being very attracted by your bait, then giving you the fight of a lifetime, and possibly even breaking your rod. It’s quite a thrill when you succeed, though!

Just look at it! With all dorsal fins in all tones of blue, a beautiful body pattern, and an overall elegant shape, this fish is indeed a looker. But that’s not all: catching sailfish is a real feat. According to experienced fishermen, they are the fastest water-dwelling creature— and you can be confident they will use that speed when you’re trying to catch them.

Have you read Hemingway’s The old man and the sea? If so, you might remember the fish who gave the protagonist constant battle over several days and nights was no other than a Blue Marlin.

These animals are, as the story shows, capricious (they’ll bite when they want to) and incredibly strong-willed. If you try to reel one in, it will fight you. If you decide to fight it, its stamina will probably outlast yours! But, if you eventually manage to catch it, you can be proud of having mastered the best saltwater fish in the world.

Now you know which are the best saltwater fish out there. They are swimming in the deep oceanic waters, seemingly waiting for you and your equipment to head their way. So, whether you are a seasoned enthusiast or a first-timer, you can pluck up courage, train your patience, and head out to get a tale-worthy catch!