Ethiopia is a unique and relatively undiscovered country. Its wildlife, culture, diverse history, and religion make it an interesting place to explore. I’ve spent a lot of time traveling around Africa and Ethiopia is a place I will never forget. It feels like Africa and the middle-east had a child and made it a Christian. Everything from the food to the people has a middle eastern way about them but with an African twist. Most Ethiopians are orthodox Christians and take their religion very seriously. The people of Ethiopia are confident, happy, and engaging and the language, Amharic, has a very unique tone. It’s impossible to avoid being a part of the day to day culture, as it engages you at every opportunity, from a meal to a roadside stop.

Lalibela is a town in the Amhara region of Northern Ethiopia and was once known as Roha. Emperor Gebre Mesqel Lalibela was known as a saint-king and was named due to a swarm of bees that are said to have surrounded him at birth. His mother thought this was a sign of his upcoming reign as Ethiopia’s emperor. In his youth, the emperor Lalibela spent a lot of time in Jerusalem and where he was inspired by the Holy Land. When he returned and ruled Ethiopia between the 12th and 13th centuries, he changed the names and layout of the town to mimic Jerusalem.

It is said that emperor Lalibela attempted to build a new Jerusalem in his capital in the response of hearing that the old Jerusalem had been captured by the Muslims in 1187. Each of the churches in Lalibela was carved from a single piece of rock, and this was done in order to symbolize humility and spirituality. The Christian faith inspired Lailbela to name a lot of the features with biblical names, the river there is even called the River Jordan. Lalibela was left as the capital of Ethiopia until the early 13th Century.

Pero Da Covilha was a Portuguese explorer and the first European to witness the churches of Lalibela. It was then visited by a Portuguese priest called Francisco Alvares and here is a short snippet of his description of the churches back then in the 1520s. “I weary of writing more about these buildings, because it seems to me that I shall not be believed if I write more… I swear by God, in Whose power I am, that all I have written is the truth”. It seems he was quite blown away by them.

Lalibela is a small village set amongst the rural and stunning highlands of Ethiopia. It’s dusty, dry, full of donkeys, and has some incredible views. It is most famous for being the home of Ethiopia’s rock-hewn churches that are in sync with the ancient, unique and untainted culture of Ethiopia. It’s a pleasure to be in with no souvenir shops, no touts, to fake cultural shows, it’s a place where you can just be without having the place thrown in your face. It’s very refreshing.

Lalibela is a place of pilgrimage for Orthodox Christians, and the main pilgrimage happens in January every year, which is Ethiopian Christmas time (even if they don’t have all the usual treats and an artificial Christmas tree). The churches were built, as we know, by Emperor Lalibela in what was meant to be a symbolic representation of the layout of  Jerusalem. One cluster of churches symbolizes heavenly Jerusalem and the other cluster, earthly Jerusalem and there is a trench between them that represents the river of Jordan.

There are eleven monolithic churches in Lalibela. Each one was carved out of ‘living rock’ and play an important part in rock-cut architecture. The churches were carved out by hard workers who only used chisels and hammers, architecturally they are a sight to behold. The eleven churches are a UNESCO World Heritage Site and the most impressive of these monolithic creations is the Church of Saint George or Bete Giyorgis. It is by far the most well-known church in the area and has been referred to as ‘the eighth wonder of the world’.

Traveling to Lalibela is like taking a step back in time and walking around and inside the churches is an experience of its own. 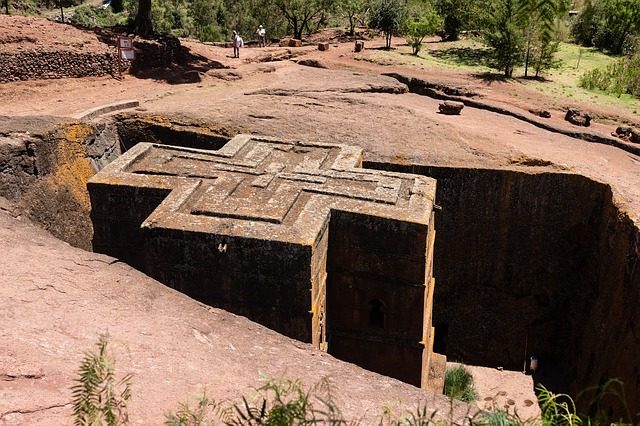 Tickets to visit the churches cost $50USD, which at first glance is a bit steep, but the ticket is valid for 5 days. This gives you enough time to really soak them in. I’d recommend spending at least 2 days visiting the churches but it is possible to see them all in one day.

The visiting times are from 6 am -12 pm and 2 pm to 5 pm every day and if you’re planning to only spend a day on them, this is how I’d advise you do it. The churches are split into two clusters as we know, the Northwestern and Southeastern and there is a 3rd isolated church, St George’s or Bet Giyorgis. I would start at 6 am, there is a great light for photos early in the morning, with the northern section and keep going until noon, and break for lunch. Head over to the Southeastern section for 2 pm and try and catch St George’s or Bet Giyorgis at around 4 pm so you can get some lovely photos in the afternoon light.

Seeing all the churches in a single day is pretty full-on and it’s worth spending two or three days in Lalibela if you can. This will allow you to take it slow and also explore the surrounding areas too.

Personally, I never get a guide, as a rule, I’m one of those guys who likes to find things out for themselves but then never learns as much because I didn’t get a guide. In Lalibela though, I would recommend it. There is not much-written information to be found about the area in Lalibela and there is very little signage, so you may end up wandering around the churches a bit aimlessly. The guides are very knowledgeable and professional. They will teach you about the local legends, depth, intricacies, and local customs of Lalibela. They know the best way around the churches, where the good picture spots are and by the end, your brain will be so full of information about the churches, you might have to sit down and have a beer just to feel normal again.

There are a lot of premade-itineraries and tours that will take you to Lalibela from Addis Ababa. This is an easy and convenient way to travel if you want something a little more relaxing than having to organize everything yourself. They will usually involve a day in Addis followed by a flight to Lalibela. From there you’ll have two or three days guided around the region and then it’s back to Addis again. They are very easy to find online and be sure to read the reviews before you book. 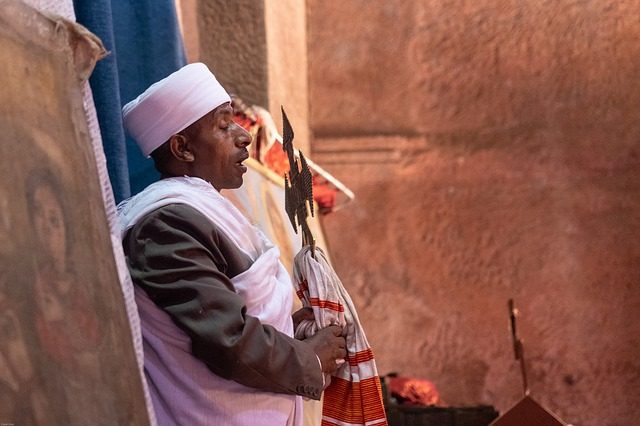 In and Around Lalibela

There are some other things to do around Lalibela too and if you’re not in a rush they are well worth your time. By now you have hopefully found a good guide who can help you plan and organize all these little extras.

Some other churches in Lalibela were not carved out of rock and are well worth a visit. These are marble churches called Yimrhanne Kristos, and they predate the Lalibela churches and were built using a completely different style of construction involving marble and wood.

Yemrehanna Kristos, not to be confused with the above, is a natural cave church 42km from Lalibela. It is one of Ethiopia’s best-preserved late Axumite churches and set in around a stunning grove of juniper trees inside a large natural cave on a hill.  The interior is truly beautiful and all the surfaces are decorated with elaborate carvings and the walls are covered with depictions of the bible painted in polychrome murals. It’s a great church to wander through and a good sunset spot too.

There are numerous options for accommodation in Lalibela and if you have arranged to go as part of a tour you won’t have to worry about it.

If you’re planning the trip yourself and looking for a budget option, the Red Rock Lalibela Hotel is a great shout. For only $15 USD a night you will have a comfortable ensuite room with hot water and a private balcony with great views. The hotel has free wifi and includes breakfast in the price and is very central, it is an easy walk down to the rock-hewn churches.

If you want something a little more upmarket then the Maribela Hotel is probably more up your street. It has beautifully decorated rooms, a restaurant, a 24-hour front desk and all the other things you can expect from a top-class hotel. Rooms go from around $100 USD a night and the hotel are happy to arrange anything and everything for you during your stay. 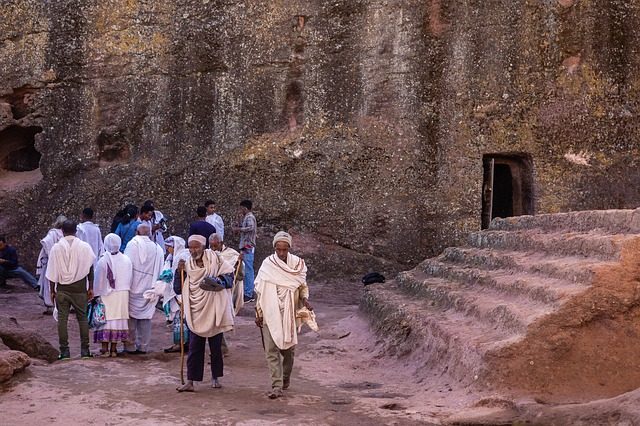 The best time of year to be in Ethiopia and thus, Lalibela is between October and March which is outside of the raining season.  If you want to see the churches in action, it’s best to be in Lalibela on a weekend or during the annual pilgrimage at Ethiopian Christmas in January. In January, thousands of Orthodox Christians descend on Lalibela for their religious ceremony of the year. During this time the prices are high and the town is packed, but it’s quite an experience even with the crowds.

On the weekends, there is a lovely local market to go to on a Saturday and Sunday has the churches full of white-robed Christians who attend for a dawn service. It’s very different seeing the churches full and inaction rather than their usual empty and echoing halls.

The weather in Lalibela between October and March is warm and dry during the day. You will have clear blue skies and temperatures of up to 27 degrees. Thanks to its altitude, it does get cold in the evening and the wind can get pretty strong. Be sure to have a warm sweater and a scarf. 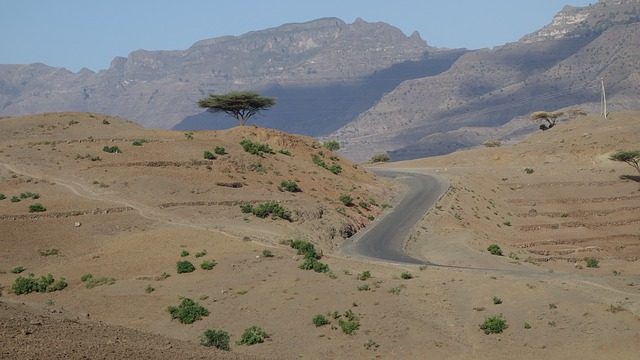 The best way to get to Lalibela is by plane. You will most likely be flying from Addis Ababa or from Makele, depending on where you are on your tour. There are daily direct flights from both Addis and Makele and the flights cost around $80 USD. These can be booked in any Ethiopian Airways office or online.

You can save a lot of money on your domestic flights if you have flown with Ethiopian Airlines on your international flights. Having flown in with Ethiopia Airlines to Addis, you are now eligible to access local flight prices which are up to two-thirds cheaper.

When you land in Lalibela, you will need a pick up as the airport is around 20km outside of town. If you have already booked your accommodation, the hotel can arrange a pick up for you for about $10 USD

If you’re not going by plane, then the road is the only other option. be warned as the road to Lalibela is know as the worst road in Ethiopia, and that is no joke. You can choose to hop on a bus or hire a car with a driver. Hire cars cost around $100 a day or more, so it’s much more economical to fly.

The bus is cheap and you’ll have to change in Woldia which is a hassle, to say the least.

Lalibela is a must-see if you are planning a trip to Ethiopia. The sheer depth of history and culture of this dusty little town is quite extraordinary and you will leave it feeling as if you have come out of another world and learned something at the same time. It’s very easy to get to by plane, there’s accommodation available to suit anyone’s budget and it is well set-up for a comfortable, relaxing and informative adventure into the old churches, bustling markets, Ethiopian culture, and orthodox Christian religion.