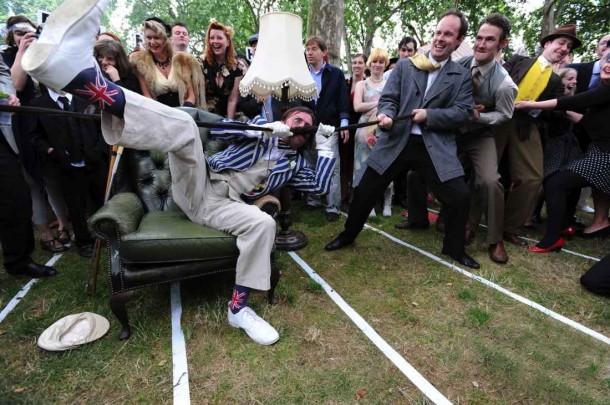 Whereas most sports focus on endurance, toughness, and speed, the Chap Olympiad revives the forgotten art of flamboyance. Great achievement in the sporting events of the Chap Olympiad take second place to style. And as the founder of the games, Gustav Temple, points out, “A chap will sacrifice a good sporting performance for the sake of an immaculate trouser crease.” Therefore, the Chap Olympiad’s sporting events center around the way a chap carries himself, and if during the demanding Hop, Skip and Gin & Tonic event, judges notice a participant breaking into sweat, they will be severely disappointed. 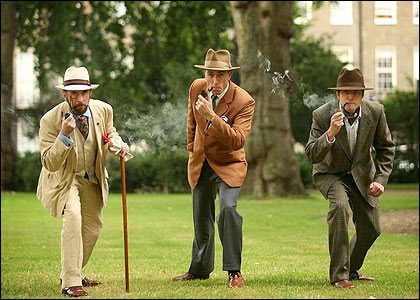 So why have these chaps and chapettes been coming out to London’s squares and gardens to watch and participate in the kind of events frat boys in the 1920’s would have made up on a whim? Why has the Chap Olympiad grown from 25 competitors in 2003 to over 1000 last year?

Well for one, there aren’t that many places on earth, where you can join other men of panache in an Umbrella Jousting competition. Also the Chap Olympiad is the main event for the anarcho-dandyist movement; a movement that opposes the general lack of manners and the triumph of sports clothing in the wardrobe of the everyday-man.

The event uses humor to advocate elegance and gentlemanly behavior in today’s society. And while many participants may spend up to an hour getting their facial hair to look just right, the grooming is done with a sense of irony, and generally not taken seriously.

If you’re not a true chap, don’t worry. There are plenty of people willing to help you prepare for the Olympiad’s events, which are all based on a chap’s everyday life. You will find the seasoned participants and judges of the very events you’ll be competing in all mingling side by side around the nearest alcohol dispenser. And while all will offer bally good advice, it should be stressed that they are decidedly queasy about such an unnatural practice as “training”.

Although the Chap Olympiad is organized by The Chap Magazine – a magazine for the modern gentleman, both men and women participate by dressing in their finest threads reminiscent of the sex-oozing styles of the era.

It’s also a great destination for lovebirds on a picnic, and any one of the dozens of wicker baskets you will trip over, as you stumble towards the bar for another martini, will be full of champagne and strawberries. But if you happen to be single, or just single during the games (if you’re the type of person that magically becomes single every Friday and Saturday night at the bar/club), then consider yourself lucky!

The abnormally high consumption of alcohol by both the ‘athletes‘ and spectators of the Chap Olympiad, combined with games like Competitive Swooning, practically guarantee that birth control pills in the city of London will be harder to finding than the Holy Grail.

While all events are fun, there are those that are more entertaining to watch or participate in than others. For example the Umbrella Joust can get quite violent, as competitors on an old-fashioned bicycles do their best to knock each other to the ground with the aid of nothing more than an umbrella!

Meanwhile in the Competitive Swooning event, a chap faces the risk of a slap to the face, or a knee to the testes, as he whispers risque phrases to ladies, trying to provoke a faint. The official Olympiad rule-book identifies the winner as: “the cad who receives the loudest slap, but maintains the wryest smile“. Sponsored by Hendrick’s Gin, the Olympiad provides amnesty to pervy gentlemen from all around the world, as long as they are witty enough not to anger the ladies. 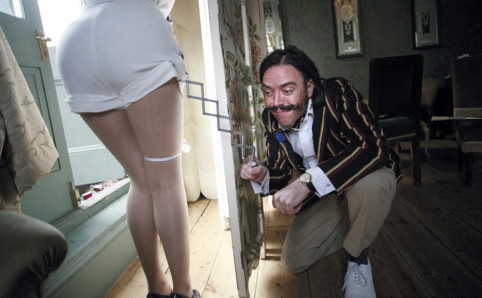 The Olympiad features 10 events, and in the past games those events included:

I’ve smoked a pipe in public, made lewd remarks to a lady, had a whisky, a martini and a lot more G & T than I spilt, it’s not even lunchtime, and I’m starting to like tweed. If I had known Olympic training was this marvellous, I would have started years ago. But that would have instantly disqualified me.

Athleticism, like sportswear is not required for participation. All you need is proper 1930’s attire, though if all your tweed happens to be at the dry-cleaners that day, in a pinch, a suit with a panama hat will do. If you’re good you’ll win a bronze, silver or maybe even a gold cravat, which replace the vulgar medals of those ‘other olympiads’. But remember, they are awarded for panache, not performance. As Gustav, one of the judges explains in his views on sportsmanship: “We encourage cheating – sportsmanship is not the chap way. Points are awarded for panache, not talent.”

The Chap Olympiad has become one of Britain’s most eccentric sporting events, attracting Londoners to this now famous celebration of athletic ineptitude and immaculate trouser creases. The next event will be held Saturday July 14th-15th at the Field of Pleasant Dreams in London.

I’m an Olympic Athlete. Say that out-loud and tell me if it has a nice ring to it? Because that’s exactly how you’ll be able to introduce yourself to the bride-to-be as you steal her away on her wedding day.

The tickets are not on sale yet, but expect to pay around £15 to participate.