Imagine yourself lost in the wilderness, could you survive? We all love a good survival story while also learning how we can get out of a dangerous situation; after all, it proves how crafty humans can be. People who get lost in the mountains or a desert can at least try to walk their way out of it—if they can keep their head on straight and not walk in circles like many in a state of panic will do. Try getting lost in the middle of the ocean with nothing to propel you or trapped in a very hazardous underwater cave without oxygen tanks. These are two tales of the most daunting and hopeless stories of people trapped by water and how they managed to survive, even without a handy survival kit on hand! 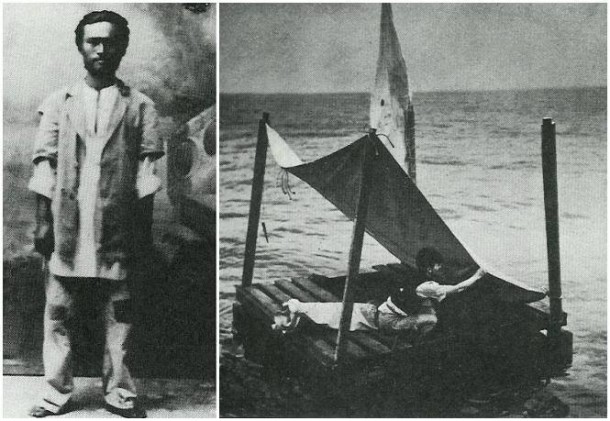 In 1942, Poon Lim served as a second steward on the SS Ben Lemond British merchant ship during WWII, which was attacked by the Germans and left Poon Lim drifting alone on a raft for over 4 months. The SS Ben Lemond was sailing in the South Pacific Ocean when  German U-Boat U-172, came along and blasted them. Before the boilers exploded, Poon threw on a life jacket and jumped ship. Fifty-four people were on board the SS Ben Lemond and possibly only 1 survived: Poon Lim.

Although he did not know how to swim, Poon had much better chances of surviving than those in the Titanic since he was in the warmer Pacific waters with a life jacket on. He spent two hours swimming around until he found an 8-foot-squared wooden raft, which he tied his wrist to for fear of falling out. Luckily, there were survival rations on it the raft too: a 40-liter jug of water, tins of biscuits, chocolate, sugar lumps, an electric torch, flares, and two smoke pots.

Over the course of being trapped on the raft for 133 days, a freighter and multiple US patrol planes passed him by, possibly on account of his Chinese descent. Some planes did see Poon and tried to drop a marker buoy for him, but a storm hit right away, causing him to get lost again. His last encounter with anyone at sea was with a German U-boat that was doing target practice on seagulls, which definitely would not save him.

As anybody could guess, Poon ran out of food too soon and needed to get creative with what he had on hand. He crafted a knife from a biscuit tin. Then he made a fishing line out of hemp rope and fish hooks forged from wires in the electric torch or nails from the planks. Instead of catching a fish as needed, Poon would catch as many as he could and laid them out to dry. Soon, he had a nice supply of food going, but unfortunately, another storm came along and ruined his stash, including his clean water.

Without water, Poon began fishing for birds. Each one he caught, he killed immediately and drank their blood to stay hydrated. The more birds he killed, the more blood there was. The more blood present, the less fish to catch because all the blood attracted sharks!

Since there were sharks milling around, the next logical step in Poon’s mind was to catch them. He baited them with bird meat attached to a braided rope, and his hands were wrapped in canvas to ensure he didn’t get rope burn. Eventually, a shark took the bait, and the catch was a success but not without a battle. As soon as Poon pulled the shark on board, it attacked him. Using the half-filled jug of water as a weapon, he bashed the shark over and over until it died. He celebrated this incredible victory by taking out the shark liver and drank its blood, and chopping off the fins to make shark fin jerky.

At this point, days, weeks, and months passed while Poon survived day by day drifting the Pacific Ocean alone. He counted the days by tying knots in his rope but ended up just counting the full moons that appeared. Eventually, he realized he was coming closer to land as the color of the water shifted dramatically. By the 133rd day, he finished his salt water rafting adventure by floating close enough to shore that three Brazilian fishermen spotted Poon Lim and rescued him.

In 1991, Gustavo Badillo and his friend, Eduardo Wallis, decided to go diving in Riito de Acarite, a Venezuelan cave that is rated as, “extremely hazardous,” by top cave diving professionals. Gustavo and Eduardo were by no means professional cave divers, though they were experienced. The cave entrance sat in the middle of a very dense jungle, and they dove into 65 degrees Fahrenheit water to begin the exploration. As they swam along, they stirred up the silt from the bottom, which impaired their visibility, leading them to swim along the cave wall for guidance. Suddenly, they were separated.

Gustavo and Eduardo managed to speak to each other from different air pockets and agreed to exit separately. Eduardo found his way out but not Gustavo. He tried to go back in several times to find Gustavo, but low on oxygen, he went to find help instead.

Twelve hours later, Steve Gerrard, a cave diving instructor from Luraville, FL, received a call from his friend, Vivian Indriago, stating that Gustavo was lost in the underwater cave for over 12 hours. Please help us find him. Steve and his friend, John Orlowski, another cave diving instructor, caught the next plane to Venezuela. By plane, by helicopter, and by Jeep, they arrived 36 hours after Gustavo first entered Riito de Acarite. They expected to find a dead body.

These two experts tied a guideline to a surface rock and dipped into the cool water. The visibility was only 6 inches, and they searched until they came to an air pocket. There, they bumped into something—Gustavo’s orange float. Unsure of how he lost it, they continued the search. After what seemed like hours of swimming, they finally found Gustavo sitting in another air pocket.

Gustavo stumbled towards them in shock and hugged his saviors. Steve swam back to the entrance to tell everyone the good news, grabbed a bottle of water enhanced with glucose for Gustavo and journeyed back. After Gustavo downed the water, Steve and John sandwiched him between them and guided him to the entrance. In less than 24 hours, Steve Gerrard and John Orlowski rescued Gustavo Badillo and were on their way back home to Florida. All in a day’s work.

Read more about Poon Lim’s story in Sole Survivor and Gustavo Badillo’s in The Cave Divers.

The author of this article is Erin Tran. If you enjoyed this piece you can follow me on Twitter @JadeFable. When I’m not learning about wilderness survival tactics, I’m usually out white water rafting or hiking with my dog in the mountains.