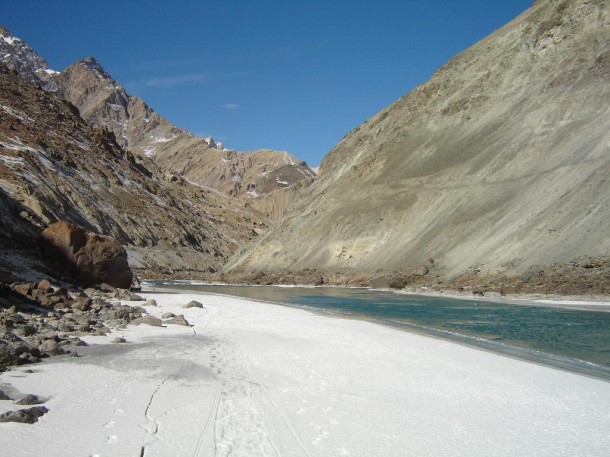 It is amazing what the human body is capable of when pushed to its limits. This is something you will surely discover on the Chadar Trek—one of the toughest treks in India’s fabled Ladakh region.

Every winter, most of the region’s mountain passes become blocked due to heavy snowfall. When this happens, locals rely on the frozen Zanskar River to make their way through Zanskar Valley and go about their daily life (oh what lengths one will go to watch Indian Idol). This journey on foot across the frozen Zanskar River is known as the Chadar Trek (in Hindi, Chadar means blanket, so effectively the term “Chadar Trek” refers to trekking on a blanket of ice).

Ever since the Tibetans settled in Zanskar Valley more than 1000 years ago, they have been using the frozen river as a route for contact with outside world. In ancient times, butter was used as a form of trading here, and it was only during winters when trade was made possible. The reason why trade was only possible in the wintertime was that local yak butter could survive for long distances only in extremely cold temperatures. While the commodity has changed over the years, trading is still done through this route.

Over the years, the Zanskar River has become a hot destination for ice trekking expeditions (and yak butter tea fanatics). It is India’s very own Alaska, where you have to brave extremely low temperatures and tough paths from time to time. The temperature could go as low as -30 degrees Celsius at nighttime. But usually, you don’t feel the temperature is that low, because you have to keep walking through most of the day.

Most of the trek takes on the frozen Zanskar River, but the itinerary may differ from operator to operator. Some choose to include famous monasteries of Ladakh on the way, which just adds to the experience. But the real highlight of the trek is walking along with the locals of Tibet, dressed in their woolen Gomchas, making their way through the difficulties of the trek as if they know it like the back of their hands. 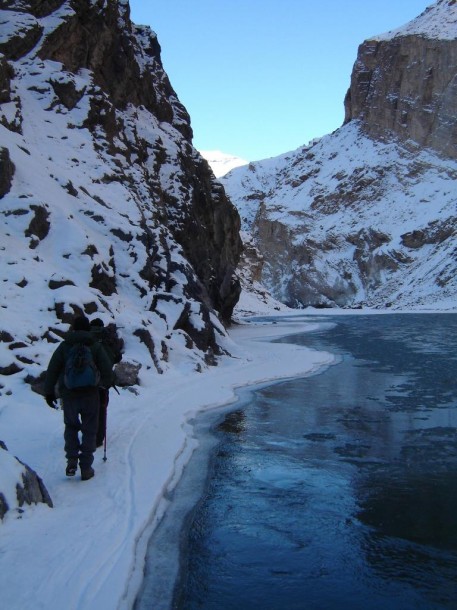 The difficulty of the trek varies depending on how cold it is. This may come as a surprise to you, but the colder it is, the easier the Chadar Trek will be. The lower the temperatures, the thicker the ice sheet will be, meaning less chance of open holes and falling through into the water.

But before you put on your Indiana Jones hat and fly out to Ladakh in your single-engine plane, remember, this trek is approximately 100 km long and can take anywhere between 10-25 days so you do need some technical skills to complete this trek. If you have not trekked before or you are just a hobbyist, it is recommended that you get accustomed to some moderately difficult treks before attempting this one.

The Chadar Trek opens from January 15 every year and continues till the end of February.

The Frozen Pilgrim—Walking 100km in subzero temperatures is bound to bestow a little wisdom onto you.

The cost varies from operator to operator. You could end up paying anything upwards of INR 50,000 ($900), depending on the accommodation and the trekking route.