Costa Rica has long been known as an offshore fishing mecca the world over, holding 95 world records. With the Pacific to the west and the Caribbean on the east and a whole lot of watery jungle in the middle, it has a great range of species to offer and not to mention a stunning environment surrounding it all. The Costa Rican government is very protective about the country’s biodiversity, as they should be, and that includes their oceans. You will have to buy a license to fish there and all billfish, sharks and any inedible fish must be released by law. 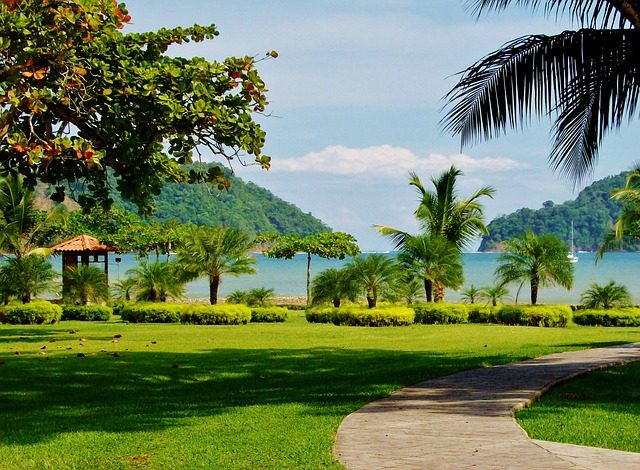 Los Suenos was the first government-sanctioned marina in Costa Rica a is located in Jaco on the central Pacific coast. The marina holds 200 wet slips and 116 drys slips and is home to a large fleet of luxury offshore fishing boats and yachts. The options for fishing cover both inshore fishing for roosterfish and offshore fishing for blue, black, striped marlin, sailfish, and other pelagics. You can target these fish by trolling, teasing and switching, fly fishing and spin fishing. The fleet at Los Suenos provides a world-class fishing operation and the area offers luxury accommodation. The best time of year to head to Los Suenos is December to March, this is when the fish run hot, although there is still good fishing all year round. 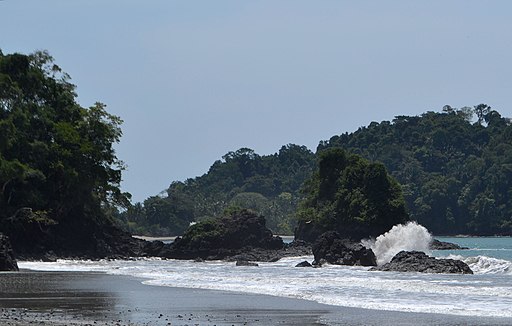 Marina Pez Vela is located in Quepos on the central Pacific coast of Costa Rica, just south of Los Suenos. It held the offshore world championship in 2014 and is known as the sailfish capital of the world. The marina is a little smaller than Los Suenos, so if you want it to be a little less crowded on the dock, maybe head a little south. It is also next door to Manuel Antonio National Park, making it very easy to dive into some jungle time on a day off the water. The fishing options and seasons are the same as those offered in Los Suenos, inshore fishing for roosterfish and offshore fishing for blue, black, striped marlin, sailfish, and other pelagics. 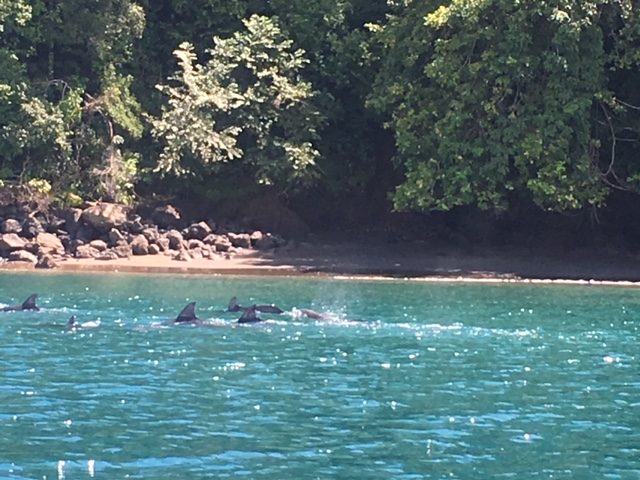 Gulfo Dulce sits at the southern end of the Osa Peninsula, just outside of Puerto Jimenez on the southern pacific coast. It gets its name from the numerous rivers and streams that empty into the bay. This area has been well protected and has very strict fishing regulations meaning the fish populations are healthy and abundant, and it is probably one of the best inshore fishing destinations on the pacific coast. You can target roosterfish, cubera snapper, trevally, jacks, African pompano and more. The inshore fishing is not all that’s good, so is the offshore fishing. Blue, black, striped marlin, sailfish, and other pelagics are available to catch in a range of methods including on the fly. The best time to fish here is between November and March, although good fishing can be found all year round. Gulfo Dulce is also surrounded by national parks and your access to nature, hiking, kayaking, surfing and more are right on your doorstep.

Tortuguero is located on the northern Caribbean coastline of Costa Rica and is only accessible by boat or plane. It is surrounded by national parks and is home to all 4 species of sea turtles in Costa Rica, oh and the fishing is off the charts. Ernest Hemingway used to fish here and it is famous for its abundance of snook and giant tarpon. Anglers have traveled from all over the world to battle with the tarpon in this area. Fly fishing and spin fishing are both available and you can find seasoned guides at fishing lodges in the area. There is also offshore and river fishing available and the season runs all year round. 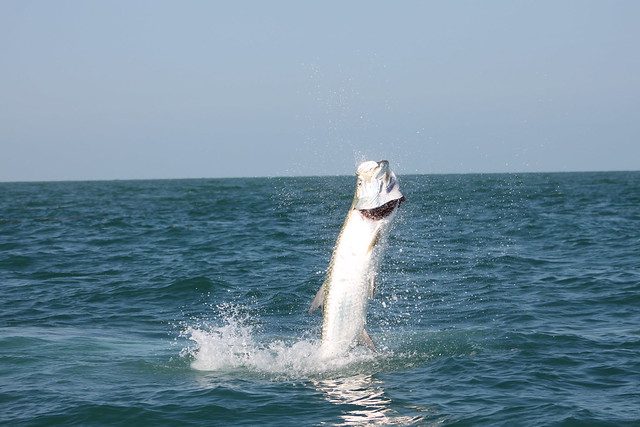 Manzanillo is on the southern Caribbean coast of Costa Rica and the inshore fishing here is similar to that of Tortuguero except there is a little more diversity. Giant tarpon and snook are here as well as bonefish, permit, jacks and more. There are fishing lodges offering guides and boats for hire who can give you shots at catching these amazing fish. The fishing here is mainly on the fly if you are going with a guide but you could always try your luck spinning from the shore, though a guide is always recommended. The season here runs from March through to the end of May and August through to the end of October. 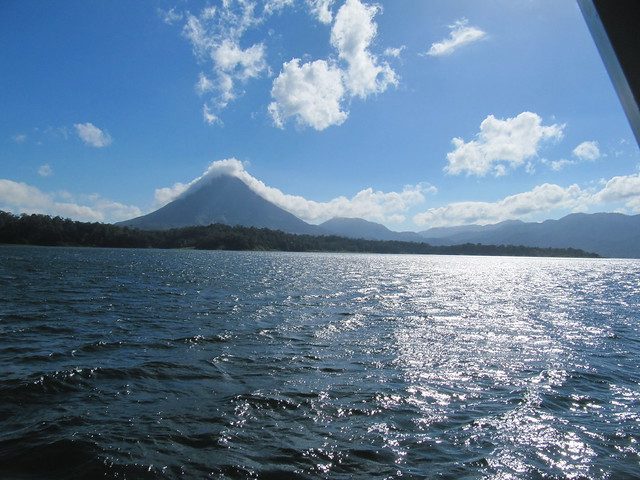 Lake Arenal is in the middle of the jungle in northern Costa Rica, just outside of La Fortuna. Lake Arenal is at the base of the Arenal volcano and is a beautiful place to spend time with your family while exploring nature. It is famous for its hot springs, volcano hiking, hanging bridges, waterfalls, zip-lining, birding, and fishing. The lake offers pristine views, crystal clear water and world-class light tackle fishing. There are three main species to target in the lake, rainbow bass, machaca, and mojarra and can be caught on fly and spinning gear. Guides and boats are readily available to hire around the lake and it can be fished all year round. 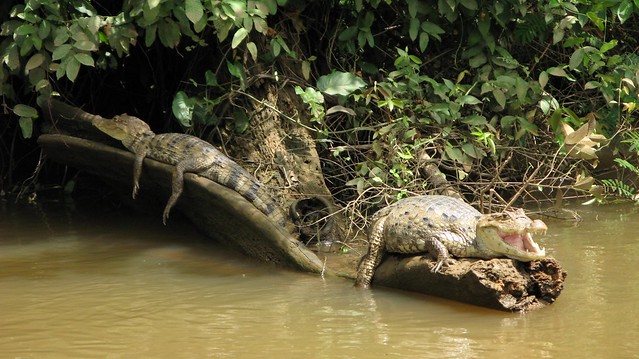 Cano Negro is in north-central Costa Rica, just south of the border with Nicaragua. This is real jungle fishing and is known as ‘Costa Rica’s Amazon’.  It is unique in that tarpon are found here, 300 miles from the sea and is one of the only places in the world where this is known to happen. The rivers here hold tarpon, snook, rainbow bass, and alligator gars. It is truly an amazing place to fish, surrounded by deep undisturbed jungles full of life. The best time to fish here is between mid-December to April but fishing is not all that is on offer. Several tours will take into the jungle to see beautiful rivers and waterfalls, incredible birds, caymans and more. 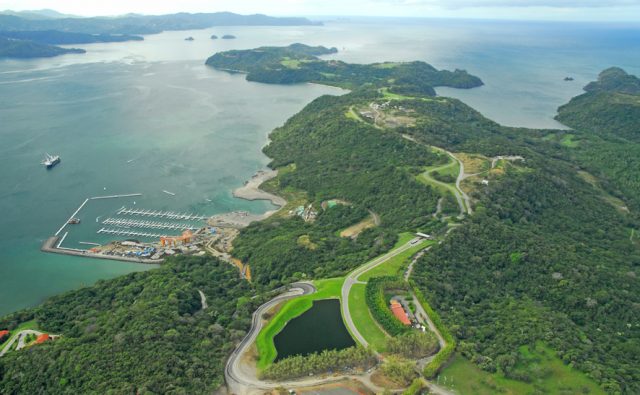 Situated on the northern tip of Costa Rica’s Pacific coastline, the Gulf of Papagayo suffers from incredibly strong trade winds from December to March. Once the winds calm down the ocean starts to get very fishy and from June to October is the best time to be here. Fishing for blue, black, striped marlin, sailfish, tuna, and other pelagics is excellent in this area and it is also known to hold the biggest roosterfish in Costa Rica. It is one of the easiest places to access in terms of fishing as Liberia International Airport is less than an hour’s drive away.

A Side For Everyone

Costa Rica offers something for every fisherman. If you are an offshore or rooster fisherman through and through, the Pacific side is the place to be, with unrivaled potential to fish for all the pelagics you could dream of. If you’re into your tarpon and flats fishing, it is the Caribbean side for you and if you love a bit of an adventure and catching new species, then the jungle is your spot. Outside of the fishing, Costa Rica is an amazingly rich country in terms of biodiversity and no matter where you go, you’ll be surrounded by rich nature and very warm welcomes.