Australia as a fishing destination has an astounding array of options for every fisherman. We have all seen pictures of the stunning coastline; thousands of kilometers of beautiful deep blue ocean, clear waters, islands, estuaries and mangrove creeks that hold a very diverse range of fish. The coastline isn’t all there is to fish though. If you take a step inland, you are going to find mountain lakes and streams that offer incredible freshwater fishing too.

Whether you are into fly-fishing, spin fishing, surf fishing, or offshore fishing, in-fact any kind of fishing, Australia has got something for you and it’ll blow you away while you’re doing it.

Cairns is located in north-western Australia and sits on the coast close to the Great Barrier Reef. The area from Cairns running north against the Great barrier Reef is known as a black marlin breeding ground. Every year, marlin migrate through this area between September and December to spawn. If you know anything about marlin, you’ll know that the biggest ones are female. This migration put’s a lot of very big ladies in a tight area and makes your chances of catching a grander, a marlin 1000lbs and up, much higher than anywhere else in the world. The International Game Fishing Association states that 70% of grander black marlin caught every year are caught in these waters. There is nothing quite like trolling a dead bait or lure almost as long as your leg behind a boat waiting for a giant black marlin to come and have it, it gets me excited just writing about it.

Marlin are not the only fish to catch in Cairns though. The seas are rich thanks to the reef and the deep drop of the continental shelf. On a day of offshore fishing, you can also go after sailfish, yellowfin tuna, trevally, wahoo, dorado and more.

If being on a boat out at sea all day is not quite your idea of fun, there is a lot of shore, estuary and mangrove fishing to be done for barramundi and other species. 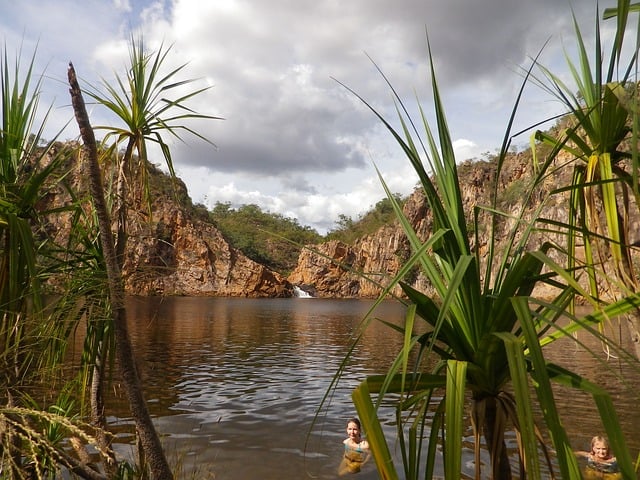 Barramundi In The Northern Territory

The ‘top end’ of the northern territory, around Darwin and the Kakadu National Park, is known to be one of the best places in the world to fish for barramundi. During the dry season, from October to the end of December, the barramundi school up in high concentrations in the local billabongs and saltwater estuaries while they wait for the monsoon rains. The fishing is incredible and you can target them using fly, spinning or baitcasting methods. Once the rains come, usually from February to May, the barramundi move up into the river mouths and can still be fished for, just in smaller concentrations. Some of the best spots in the Top End include the Daly River and the Adelaide River.

It is not all about barramundi here though, the area is also known for great reef and offshore fishing.

The Wessel Islands are one of Austalia’s most remote fishing destinations and as all fishermen know, the more remote the place the better the fishing. Nestled in the top corner of the northern territory, the chain of islands creates a series of coves and clear sandy flats that are a fly fisherman’s dream.

The array of species on offer is mind-blowing. blue bastards, black-spotted tusk fish, queenfish, barramundi, giant trevally, Spanish mackerel, coral trout, golden trevally, brassy trevally, and giant herring all inhabit the flats, mangrove creeks, and rocky island channels. But the main event is, of course, every fly fisherman’s dream, the indo-pacific permit. There are two species found in the Wessel Islands and they will not have seen many flies or people before, thus making the holy grail of fly fishing very achievable.

There is only one way to fish the Wessel Islands and that is on a liveaboard. Unfortunately, if you are not into fly fishing, then you aren’t going. There is only one operating liveaboard and it is exclusively for fly fishing. This is a good thing in terms of conservation and fishing pressure, so don’t be sad if you can not fly fish, go grab a rod and start learning, it is worth it. 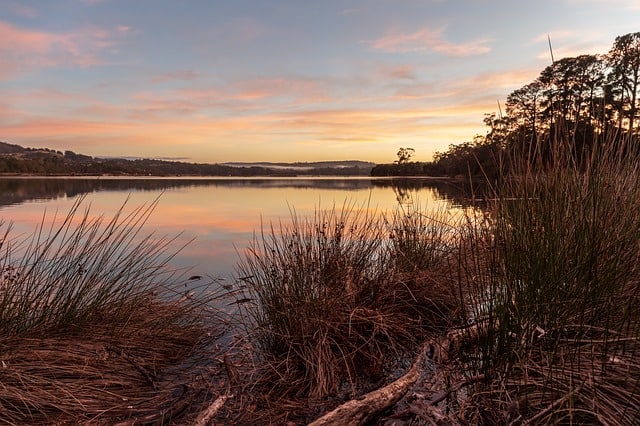 Trout fishing in the central highlands of Tasmania is pristine. Trout are not endemic and were first introduced in 1864 and now there are hundreds of lakes and rivers offering unpressured brown, rainbow and sea-run trout fishing surrounded by a dazzling wilderness.

Some lakes and rivers are easily accessible but for the wild fisherman out there, a lot of fisheries can only be reached on foot, which is part of the charm when you want to get fully immersed in nature. The best time to fish is between spring and fall and you can spin-fish, bait-fish and fly fish, but be sure to check the regulations. The fisheries are very well managed and the rules are there to make sure it is looked after.

Bluefin are the largest tuna on the planet and grow over 1000lbs. Off Port Lincoln in South Australia, the Great Australian Bight and the Spencer Gulf merge with the cold waters of the Great South Australian Coastal Upwelling System making very nutrient-rich fishing grounds which the bluefin love to frequent. The best time to fish for these giant tuna is between late summer and autumn but the sea off the coast of Port Lincoln can get very rough. If you haven’t got the best of sea legs, then don’t worry, on a rough day you can fish the surf from the beach for snapper, Australian salmon, whiting, yellow-tail kingfish and more.

Next to Exmouth on the northern tip of Western Australia is Ningaloo reef. It is the largest fringing reef in the world and is host to an incredible amount of biodiversity. It is famous for the hundreds of whale sharks that call it home from March to October as well as incredible fishing. You can troll, bait-fish, spin-fish and fly fish this magical area, so there is something for everyone.

The offshore fishing here is incredible thanks to the sharp drop of the continental shelf quite close to shore and you can catch most of the pelagics you might dream of here, but that is not what it is famous for. The Ningaloo reef offers fisherman a chance to catch permit, bonefish, giant trevally, golden trevally, cobia, queenfish, and milkfish, all sight fishing across crystal blue flats.

Fraser Island, about 300 kilometers north of Brisbane, is the largest sand island in the world and is worth a visit even if you’re not fishing. The juvenile black marlin fishing here is quite a new thing in the fishing world. After the black marlin leave Cairns, they travel down the coast and for some reason, the young ones, and a lot of them, come in very shallow at Fraser Island. This is something that does not happen anywhere else in the world. You can sightfish for black marlin in a few meters of water, it is flats fishing but instead of casting to a bonefish, it is a black marlin. I can’t imagine anything more exciting.

If that is not for you though, there are plenty of other options. You can offshore fish for black, blue and striped marlin as well as fish the flats of Hervey Bay which is particularly famous for golden trevally. Surf fishing from the beach is also good in this area and you can target tailor, flathead, whiting, snapper, and bream.

After a five and half hour drive south-east from Sydney, you’ll find yourself up in the Snowy Mountains. This stunning mountain range is host to lakes and rivers holding brown, rainbow and brook trout as well as Atlantic salmon. The most famous fishing spot is Lake Jindabyne one of the best trout fishing lakes in Australia. The lake sits at an altitude of 930 meters and is fed by the Thredbo, Snowy, and Eucumbene rivers. All types of rod and line fishing are permitted here and the best time to fish in early or late in the day.

Cape York sits on the furthest northern tip of Australia and is only accessible by 4×4 from May to the end of December,  at other times of the year, the rains make it impossible to get to. If you like an adventure then this is the trip for you. After a few days of driving, you’ll find pristine beaches, uninhabited islands, and very fishy waters, but be on the lookout for saltwater crocodiles.

You can fish for a whole host of species including barramundi, cobia, giant trevally, mackerel, queenfish and more. If you are not up for the drive you can fly into Bamaga or Weipa from Cairns and stay in a fishing lodge or hire a liveaboard, but the journey really is part of the adventure.

Australia, as you can see, is a fisherman’s paradise. It is host to some of the most spectacular fishing the world has to offer and at the same time, it has something for everyone. Whether you are a pro and are trying to complete that bucket list or you just like chilling on the beach fishing the surf, it is somewhere you have got to go.