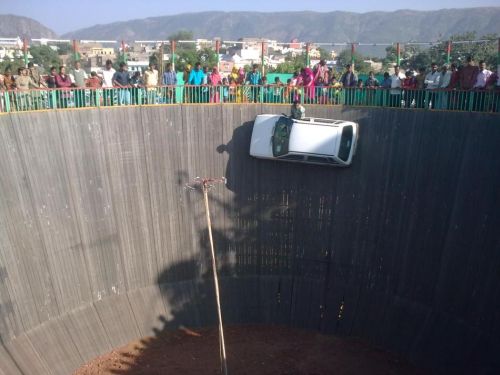 The sports world sees the same things happen each year…the Super Bowl in February, the Final Four in April, the World Series in October, and so on. Just like work and school tend to do, this adds to the repetition of life. People are starting to look for alternative sports, either to watch or to participate in.

Sure, we’ve all heard of base jumping, ice swimming, and the now-infamous wife carrying. These, as other activities, have become somewhat mainstream ever since the rise of “extreme sports” in the 1990s. But what about the truly rare and unknown? Searching the far reaches of the internet turns up some odd pastimes. Here are a few new ways to spend your Saturday afternoon.

Slacklining is tightrope walking with a not-so-tight rope. It sounds simple enough, but there are different divisions of slacklining such as tricklining, and it is tricklining that has developed into a competitive sport involving – you guessed it – tricks: jumping, turns, sitting, lying down, etc., all while balancing on the rope. International competitions are held worldwide by the World Slackline Federation.

This one you may have recently seen on 60 Minutes. Free Soloing is rock climbing without safety equipment. No ropes, no harnesses, no screws, no grips – just a man and his rock. It is becoming increasingly popular across the nation, from Yosemite National Park to the New River Valley Recreation Area near Roanoke, VA. The 60 Minutes spot in question featured Alex Honnold, considered to be the best Free Solo climber in the world. There isn’t much money in the sport, but with sponsorships, Honnold is able to reserve the bulk of his time free for climbing.

This is exactly what it sounds like: alternating rounds of chess and boxing, continuing until someone is either knocked out or checkmated. Popular in England and parts of Eastern Europe, this combo sport draws crowds to pubs and loading docks. While there is something decidedly back-alley about that, the crowd itself is made up largely of young professionals. So don’t be shy. You know you want to.

CycloCross races, cross country cycling complete with all-terrain navigation and an obstacle course, contain a high number of short-course laps over paved roads, off-road trails, flat and grassy areas, and steep hills. Obstacles are thrown in at various locations, causing the rider to have to get off his bike and carry it with him as he climbs over or around the obstacles. This hybrid of BMX dirt track racing and LeMons auto racing is a worldwide hit, with a World Cup season in the autumn months. The VACX FINALS was just held in December in Forest Hill Park, Virginia. It was a sight to behold.

This is, in fact, not rock climbing on sand dunes. Instead, you’re in a four-wheel drive jeep or truck. You gain ample speed before staring the near-vertical climb up the face of a cliff-like dirt pile. If a propeller-driven airplane was to get this kind of angle, the engines would stall. Once at the top, the driver angles the truck so that it flips onto its side perpendicular with the path up the slope, and then gravity rightens it back on its wheelbase and starts it back down the way it came up. The crowds that gather to watch the event in the pit below resemble the mobs at the quarry drag-race scenes in your favorite 50s movie.

This one takes a video, not a simple image. See it here:

Paul Moore works with Smith Mountain Homes at the most beautiful lake in the Virginias with plenty of locations for outdoor sports.