The island, also known as Thira, is surrounded by a family of other smaller islands, as well as a larger and similarly popular island to the south: Crete. Roughly 3600 years ago, this family formed a single large island prior to significant volcanic activity in 1628 B.C.E. The volcano, Thera, is to blame for raining down catastrophic amounts of ash and fire onto the Minoan civilization, Santorini’s early inhabitants. This phenomenon is regarded as one of the largest volcanic eruptions in recorded history. According to popular belief, it serves as the primary source of the legend of the fabled Atlantis. 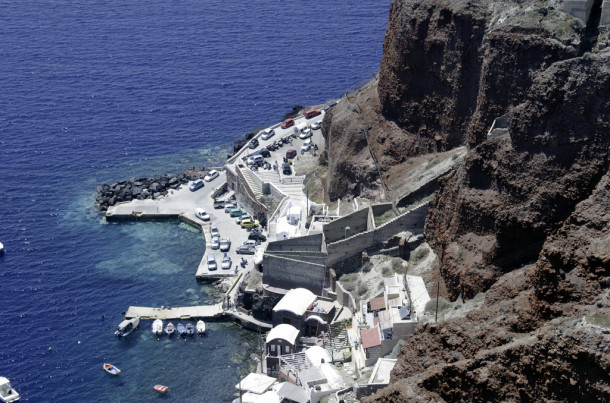 Aside from the history, the island of Santorini offers a lot to see and do, but one of the absolute must activities to do is the Caldera mule ride. As for the mule ride, it serves as the first introduction to the island. It’s the preferred mode of transportation up the island cliff known as the Caldera, to the villages. The journey begins in the old shipping Harbor known locally as Ammoudi. Along the way up the Caldera to the cliff-side village of Fira or Oia, it takes roughly 30 minutes on mule-back. The mules are friendly and provide an authentic Greek island experience.

You should be warned this trek is not for the faint of heart. You’ll be traveling up 483 zigzagging steps through incredibly steep, rocky terrain—that’s roughly 900 feet. Oftentimes, the mules (since they’ve done the trip hundreds of times before) move quickly along the ocean-side cliffs, making for an exhilarating experience.

Vendors can be found all along the harbors below the villages with mules waiting to be hired. The price is around 5 euros per person, which equates to about 6 US dollars. Remember to bring lots of water!

To learn more about travel advice check out the wiki-travel page by clicking the link. 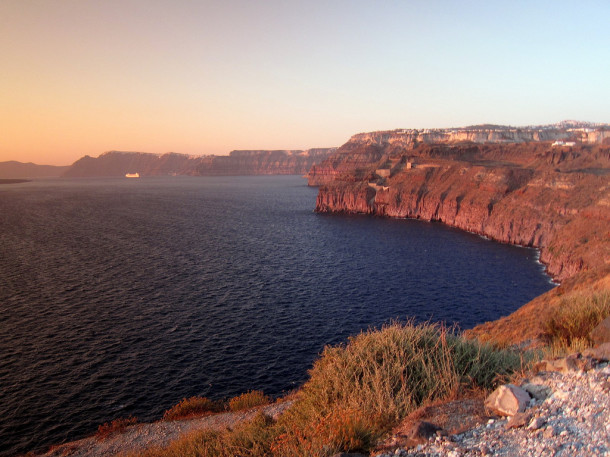 About the author: Joseph Stark Jr. is a freelance writer and blogger by day, focusing on technology and web design niches. By night he is a tech junkie, gym member, and avid comic book enthusiast. He’s also a world traveler and in March of 2013 he’s making a big move to Santiago, Chile to live. Friend him on Facebook and say hey.