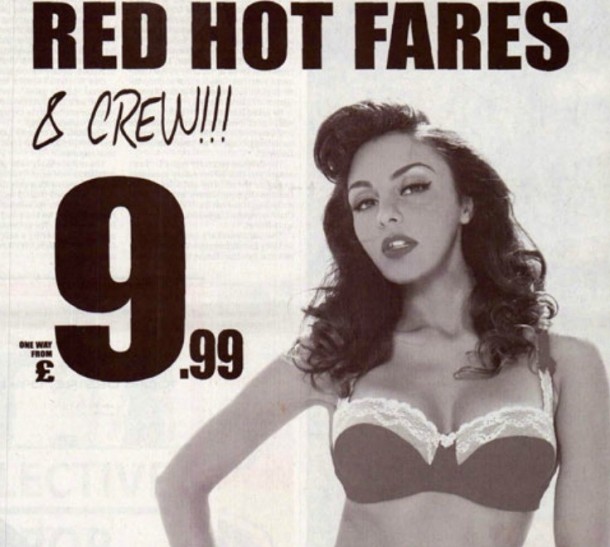 There are many places in this world–more than one thousand, even. With so many options of where to go, it’s understandable that participants in the travel industry have to get creative in order to capture their audience’s attention. But, if at all possible, it’s better to do this without enraging entire nations or demographics.  Something these next ads failed to do.

Australia’s Where The Bloody Hell Are You? Ad

When trying to get people to come to your country, it’s probably a good idea not to disparage them in the process. Yet, this point didn’t dawn on Tourism Australia before they proceeded to spend A$180 million on an ad campaign that would soon be banned for offending the frail sensibilities of the British people.

Launched in 2006, the ad starts off like any other cookie-cutter travel ad. The ad features a montage of overzealous Australian’s proclaiming their preparedness for your arrival—apparently they even shampooed their camels. The ad makes it all the way through to the last scene as just another generic travel ad but takes a turn for the worse in the final 6 seconds, when Australian model, Lara Bingle, looks into the camera and proceeds to question your self-worth by asking “so, where the bloody hell are you?”

The ad was soon banned in Canada and the UK, and Australia was forced to turn to it’s other giant cash-generating industry: cute, triple-threat, leading men.

The South Carolina is so Gay Ad 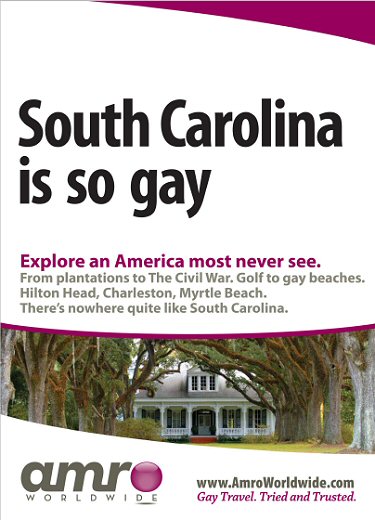 The southern United States has always been known as a hotbed for tolerance and acceptance, so it may be a surprise to find out that a UK ad promoting South Carolina as “so gay” drew an irate response from officials in the state. The ad campaign launched by marketing agency Out Now Consulting was intended to promote Amro Worldwide, a London-based gay tour operator, and to tout tourism to several gay-friendly U.S. destinations.  But soon after the ad was launched, the office of disappearing governor Mark Sanford along with several other state politicians denounced the ad for using public money to promote a political agenda.  South Carolina’s tourism department refused to pay the ad’s $5,000 fee, presumably so that they could focus on promoting the state’s other notable qualities: the worst public schools in the nation and growing rates of obesity. 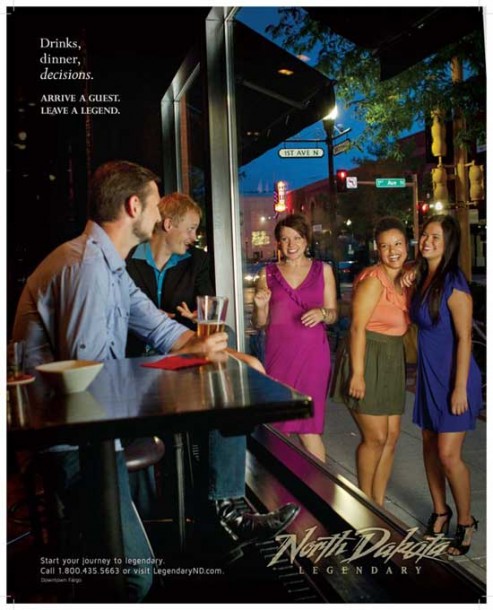 Let’s face it, when you’re tasked with getting people to come to North Dakota, you’re facing an uphill battle. North Dakota isn’t exactly Miami, or even Butte, Montana for that matter. So how DOES one come up with an alluring yet realistic ad campaign for a state that only gets mentioned when people confuse it as the place where Mount Rushmore is located.

The brains behind the Arrive a Guest Leave a Legend ad thought they had the answer when they took five average-looking people (or, possibly five of the best looking people in North Dakota) and placed them in a setting full of sexual innuendo. The message of the ad was simple: come to North Dakota and bag yourself a couple of 5’s and possibly even a 6. It’s not clear whether the neon light in the background was purposefully made to look like a penis, but what did become clear was that this ad was not popular — probably because people were outraged that North Dakota expected them to shell out $2000 on flight tickets and accommodation to get what they could get for free in one of the seedier neighborhoods back home.

[iframe]
[/iframe]
VisitDenmark’s YouTube ad was another good example of why highlighting your destination’s one-night-stand potential may not necessarily be the best way to attract tourists.

The ad, posed as an amateur video,  features a young Danish woman sitting in her living room with a baby. Nurturingly, she smiles at her nursing infant and is overcome with joy as she introduces him. 20 seconds in, the ad takes a serious turn, when the woman looks into the camera and vulnerably exclaims that she is looking for the child’s father. She goes on to explain that she met the father one night while he was vacationing in Denmark. She was on her way home, and he had lost his friends, she explains. She doesn’t know his name or where he’s from, but admits that she was persuaded to have sex with him due to his interest in ?hugus?, whatever that is. She concludes the video with a final plea for her mystery man to email her from his unknown whereabouts, p.s. she’s not mad.

When first posted on YouTube in 2009, viewers, thinking it’s a genuine video made the ad go viral. The video garnered close to  a million views from sympathetic YouTuber’s before it was exposed as a marketing ploy. When it was discovered that the woman was an actress, and the baby a CGI hologram, the online community and government officials went into uproar over the portrayal of Danish women. The video was soon pulled by the creators, thus never fully achieving its goal to capitalize on the up-and-coming impregnation fetishism tourist market.

Being funny can be difficult at times, because inevitably someone out there is going to be offended. No matter the topic, there’s always going to be someone who was either mauled by a Yorkie, emotionally traumatized by a 4-year old girl, or fell victim to some other esoteric and possibly hilarious cause. Given this constraint, it’s understandable that Air New Zealand didn’t think their ad would draw so much controversy when they launched their Cougar Contest Ad.

The mockumentary ad follows the mating habits of women over 35 years in age as they prey on younger men. The ad was paired with a promotion that asked ‘cougar’ women to send in photos with younger men in order to win tickets to a rugby match. Many found the promotion funny with more than 50 women sending in their photos, but others did not. New Zealand’s Rape Prevention Education labeled the ad degrading to women and spoke of complaints raised by male survivors of rape. The ad was swiftly wrapped-up as protest mounted and the airline did what any company trying to clean up its image would do: made a sexually suggestive pet squirrel their spokesman.

Are you finished? Want more? Go see 5 Tips for Memorable Overseas Adventure Travelling. Oh yeah, and like us on Facebook.