Georgia is built upon the Caucasus Mountains. It’s a well-known fact that white people love mountain climbing. Another well-known fact, white people are Caucasians. Yes sir, the Caucasus region is the birthplace of the white folk, but Georgia is esteemed for its hospitality, so everyone’s welcome. Frankly, Georgia is a popular climbing destination for the Europeans. Granted, it is closer for them than it is for the Americans, but affluent adventurers love traveling to remote areas of China, Africa, and Polynesia, so why not take the Silk Road from Georgia on your way to the Orient?

The Caucasus region is as ornate with history as it is mythical. Jason and the Argonauts also came over for some rock climbing in the Colchis region of Georgia and left with the Golden Fleece – plus he got to make out with the king’s daughter, Medea.

Today, Georgia is a modestly-sized country open for tourism, well charted, and, relatively, safe. In the mountains, you have a higher chance of getting eaten by a big, bad wolf than getting mugged. Up there churches are more ubiquitous than McDonald’s in suburbia. They have bred a culture of honor, respect, charity, and love that is steeped deeply in the culture.

Back to mountain climbing, Georgia can accommodate a wide range of adventurists. Highly professional guides are available for the recreational climbers while the high-altitude peaks will challenge even the most seasoned. Private groups looking for a pleasant summer climbing excursion should visit the mountainous regions of Svaneti or Tusheti where plenty of guides and climbing resources are available. Because many great adventure destinations are hard to find out about online, it is usually a good idea to go to these regions with a tour group that can tailor your experience. 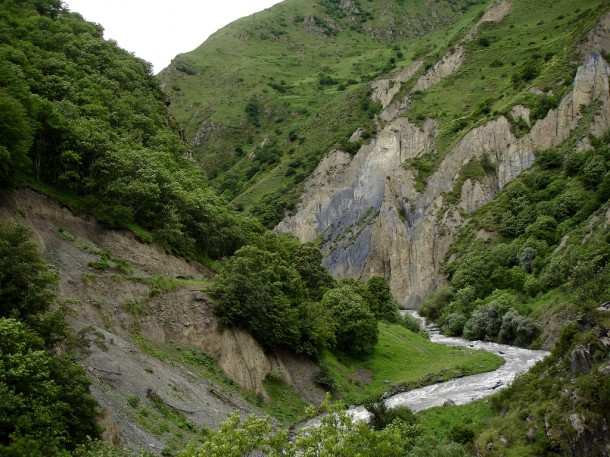 Depending on the altitudes you are comfortable with, climbing conditions in Georgia’s mountains range from mild to extreme. Weather can change quickly but not often. Those fond of hiking should also take advantage of the mountainous settlements in Georgia. While hopping atop the hills, there are myriad of meadows and historically preserved settlements, churches, and towers that will delight even the staunchest of hipsters. If you are up for the challenge, make sure to see the ancient caves nestled within the mountains. These caves are almost prehistoric and unique to the region. Instead of sleeping strapped to the mountain, feel free lodge in one.

Mount Ushba – The Highest Peak in the Caucasus

Experienced climbers looking for a challenge should consider Mount Ushba, in Georgia’s Svaneti region. It is the most picturesque of the Caucasus peaks shaped like a spire. Also, it is the highest point in the Caucasus. The surface is icy. The climb is steep, and you have two options to take it on: the Southern and the Northern ridges. The Southern Ridge is the more challenging of the two while the Northern is more accessible – especially if you are coming in from the Russian side of the border.[/caption]

There are no caves or settlements on Ushba, but the scenery is breathtaking, literally. Proper conditioning and gear are imperative to undertake this climb. Guides are highly recommended for the first go. Any climber at this stage should have his/her own gear, but should anything go awry, all necessary and secondary equipment can be purchased in Georgia. Though, do not expect cheap prices. 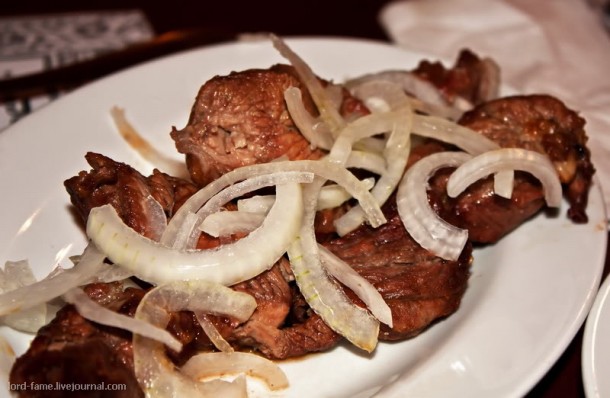 All that climbing can make a person very hungry. Fortunately, Georgia is praised for exquisite food that’s as delicious as it is nutritious. You absolutely will not go hungry in Georgia. On the traditional menu, there are Khachapuri (Georgian, baked cheese bread), Khinkali (Georgian dumplings), Baja (Georgian, curry-like walnut sauce), Shashliki (Georgian Shish-kebabs), and much more. Don’t rely on these examples too closely for comparison.

They are just meant to give you general ideas. If you should choose to go for the hiking and climbing trip, you will definitely be treated to some of these dishes by the local folk, with the main ingredients locally grown, but if you get homesick for a Big Mac, you will find many of the major, Western fast-food franchises in the capital. Have it your way at the BK; grab a slice of pizza; the hot dogs are juicy, but you may need to contact the Mexican embassy for tacos.

After a hearty meal, wash it all down with either Pepsi or Coke, but the Georgian soft drink, Lagidze water, is highly recommend. Lagtze waters come in a colorful variety of delicious and natural flavors. Georgia’s cuisine is amongst the world’s best kept secrets, but it is quickly gaining recognition among visitors—so much so that it is now possible to take entire tours dedicated to savoring all the tastes and smells of Georgia.

So if you are hungry for adventure, get your harness down to Georgia for experiences worth savoring. From the streets to the peaks, feel the passionate heartbeat of the land. Breathe the crisp mountain air and be refreshed by the cold streams of water flowing through the mountains as you make your way to the top. Meet a culture preserved by the grace of the land. Share in their vivacity. Witness the diversity of the region, the diversity of the climate, the diversity of the people. Explore old churches and prehistoric caves. Tread the paths of our distant ancestors then see their fossils in the great museums of Georgia.

Time To Head To Tbilisi

Descend from your adventure to Tbilisi, the capital city, and go see the opera. Muse at world-class art. Party hard.

Be carried by the funicular to an amusement park situated atop of Mount Mtatsminda in the heart of the capital and make sure to visit the pantheon of great Georgian literary and political figures on your way back. If you are still feeling homesick, vote for the Georgian Idol.

There are also some stunning doors and windows to be seen in Tiblisi, often in the smaller backsteets.

Either way, you will want to book some comfortable places to stay in Tbilisi, so be sure to plan ahead so you don’t miss out on the best options. I had the misfortune to just take what was left, and it’s not always ideal. 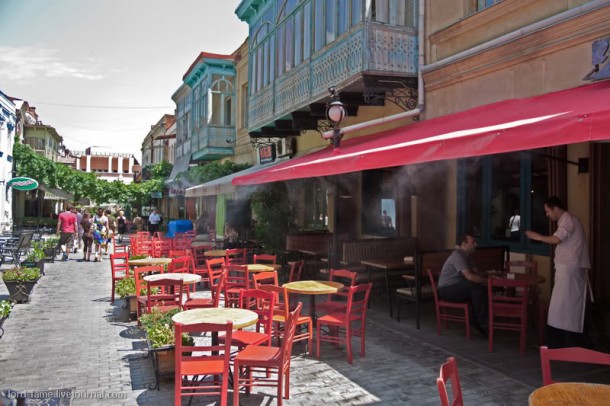 Embark on the most cultured climb of a lifetime. There is no need to cast yourself to the utmost remote nooks of the Earth in search of a thrilling adventure. Find it conveniently on the fringe of Europe and Asia. Experience the unique blend of these two continents from an almost divine vantage point. Visit Georgia.

Tongue twister – Georgian language is notorious for words with lengthy consonant strings. Pronouncing some of them – or your guides’ last names – might prove more challenging than climbing mount Ushba.

The costs can range anywhere from $500-$5000 depending on the duration of the stay, where you are coming from, and where you will be lodging. Of course, your tastes and standards of living will also factor into the cost. The most substantial portion of the budget will be the airfare. From thereon, you may choose to lodge at hotels or rent dwellings from the local folk. The latter option should be arranged prior to the departure. Food is modestly priced and readily available below extreme altitudes. It is prudent to allow for additional funds in case of emergencies such as gear loss or breakage, medical expenses, and government fees.

Browse the internet for flight deals. Consider transfer flights to Russia or Turkey, and enter Georgia by land – by bus or train. It may be a significantly economical alternative. Also, consider browsing the internet for a host from whom you may rent lodging at considerable savings and additional perks such as meal accommodation.

It is a good idea to invest in an outlet converter. Georgia uses the European standard, circular outlet plugs, so to maintain the functionality of all your devices, outlet converters are necessary. It’s probably a good idea to buy them prior to the departure, for obvious reasons. On a similar note, if your videos look distorted and jumpy on some of the local televisions, that’s because they are PAL system, unlike North American NTSC. Don’t freak out. Everything is fine. You can either convert them or watch them back home.