Colorado sits in the center of the United States and thanks to the Rocky Mountains is one of the best fly fishing destinations in the world. The streams that are fed from the melting snow and glaciers of the Rockies flow east and west to form incredible trout rivers. The rivers that flow to the East, hopefully making it all the way to the Atlantic run through arid and short grasslands while the rivers that run west to the Pacific are surrounded by mountain forests and bush. There are so many good rivers it’s hard to narrow them down to the best fly fishing in Colorado. A good thing to know about is the ‘Gold Medal’ status that the state of Colorado assigns to their best trout waters. If you’re fishing in a Gold Medal stretch your chances of catching a trophy trout are high. There are brook, brown, rainbow and cutthroat trout in the water of Colorado and here are some of the best rivers to fish, many of which you can do in one big road trip. 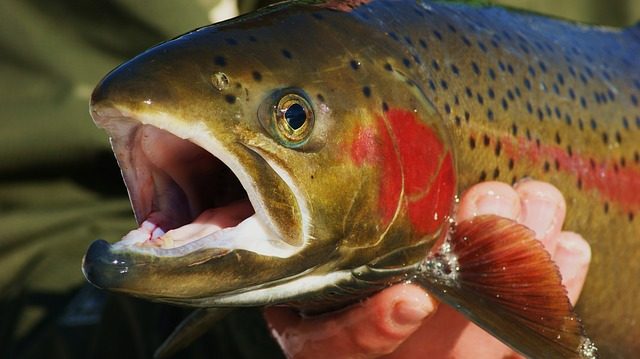 The Rio Grande starts in the San Juan Mountains and flows out of the Rio Grande National forest and into the town of South Fork. Fishing the top end inside the National Forest should not be missed. Wading among the trees fishing small pocket waters for the native Rio Grande cutthroat is as wild as it gets. The cutthroat are blocked from moving downstream to stop interbreeding with non-native species.

The Gold Medal section of the river begins in South Fork and runs for 17 miles to the town of Del Norte. This part of the river is full of trophy brown and rainbow trout that are aggressive, to say the least. The best time to fish is between June and July when the mayfly and stonefly hatches are going off. The lower sections are better fished with a drift boat but wading will also get some good results.

The South Platte River starts in South Park and flows through Denver. It’s one of the most popular rivers in the state thanks to its Gold Medal status and being next to Denver. Within a few hours of arriving at the airport, you could be casting a line. It’s hard to go wrong on the South Platter and just about everywhere you cast a line will be productive. One of the best parts of the river is the North Fork where you’ll find rising brown, rainbow and cutthroats that will keep you entertained for days.

The stretch between Spinney Reservoir and Elevenmile Reservoir is known as the Dream Dream section. The combination of the cold water leaving Spinney and the huge trout that leavee Elevemile to spawn in the river during spring and fall make this a place where dreams can come true. Both banks of the river are open to the public but be prepared to share them as the spot can get very busy.

On the western side of the Rockies lies the Blue River. The Blue lost its Gold Medal status in 2016 but won it back again in 2017. The loss of the medal highlighted the management changes needed to bring the river up to standard again. One of the best places to fish the Blue River is in Silverthrone, just below Lake Dillon. Here you’ll find an odd combination of trophy trout fishing and shopping malls, there aren’t many places in the world you’ll find that. The river is very easy to access meaning it has a lot of traffic and thus some wise trout. You’ll still catch a lot of fish though and a trophy trout is very possible on every drift. 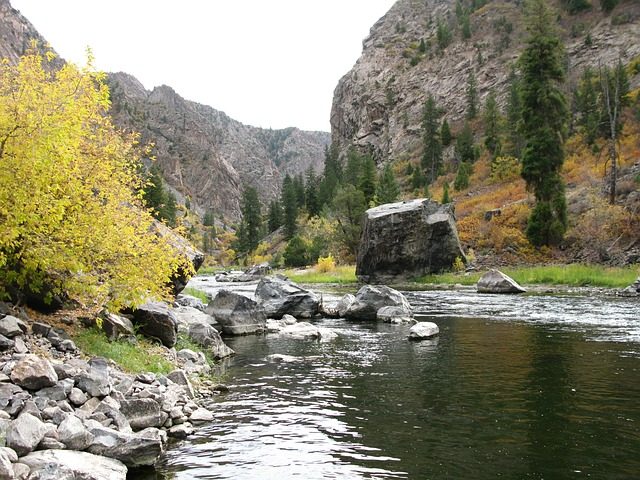 The Gunnison River has some of the best rainbow and brown trout fishing in Colorado. It begins high in the Rockies and eventually joins the Colorado River. The Gold Medal section sits between Crystal Dam and the North Fork of the Gunnison but the best part of it to fish is in the Black Canyon of the Gunnison National Park. The roads are very steep and windy, the difficult access keeps the fishing pressure lower than other places. It’s a great place to catch trophy browns and rainbows while be surrounded by the incredible scenery of sheer walls and mountain tops. The river in this area has a serious flow and wading across it is between tough and impossible, it’s therefore recommended to fish it with a friend or an experienced guide.

The Gunnison also offers some great backcountry fishing, and with the right permit, you can hike into the river further upstream. Kokanee salmon also run the Gunnison and can be caught in the late summer or fall about the Blue Mesa reservoir.

If wading is your thing then the Upper Colorado River is a great choice. It’s the most recent winner of a Gold Medal for its section between Canyon Creek and Rock Creek and has some of the best trout fishing you can find on the western side of the Rockies. The best place to access it from is Granby where you can wade into the river from the grassy banks. Granby sits just next to the Rocky Mountain National Park, so if you’re on a family holiday, love hiking, want to fish and explore then basing yourself in Granby isn’t a bad idea.

The Animas River is a lovely trout stream that is surrounded by beautiful mountain scenery. The best place to access the river is in Durango and the river there can be 100 feet wide. It has beautiful riffles, large boulders, and deep pools that many a huge trout call home.

In 2015 there was a mining wast spill just north of Durango that a lot of fishermen worried about, thinking the river might have lost it’s trout and have to be put to rest. But fear not, for the fishing is still good and the stretch just down from Durango, between Lighter Creek and the Rivera Crossing bridge is still a world-class piecen of water. A 20lb brown trout was caught in the Animas in the 1950s and it still produces very large fish today thanks to the abundance of food in the system.

The Fryingpan River is known all over the world for its incredible fly fishing and stunning scenery. It’s been on the covers of magazines and I’m sure you’ve heard it mentioned before. It is highly regulated by the state of Colorado to ensure that it continues to produce big wild trout. It’s not uncommon for fishermen to catch rainbows over ten pounds in some sections of this river.

It’s worth fishing the small pocket waters above the Reudi Reservoir dam, it makes for fun fishing but don’t spend too long there and make sure you head to the Gold Medal section below the reservoir that ends at the confluence of the Roaring Fork River. This section is full of big fish, mountain scenery and crystal clear water. It sounds idyllic and it is, so you won’t have it to yourself. The section is about 14 miles long and you’ll often see big trout launch from the depths to sip up emerging dry flys.

The Roaring Fork is not as well known as the Frying Pan even though it’s still one of the best trout rivers in the whole United States.  The upper section of the river is small as it meanders its way through meadows and becomes a ‘roaring’ stone river in the lower sections. The fast current means only large fish that can handle it hang out there and there are some giants that call this river home.

At Basalt, the Frying Pan River joins the Roaring Fork and from there, over 22 miles, to the confluence with the Colorado River is designated a Gold Medal fishery. If you combine this with the Fryingpan Stretch, you get over 30 miles of Gold Medal waters. The river is best fished by drift boat which will get you into the hard to reach spots but it’s also very wadable. The green drake hatch in late summer is something not to miss if you can, you’ll never forget it. 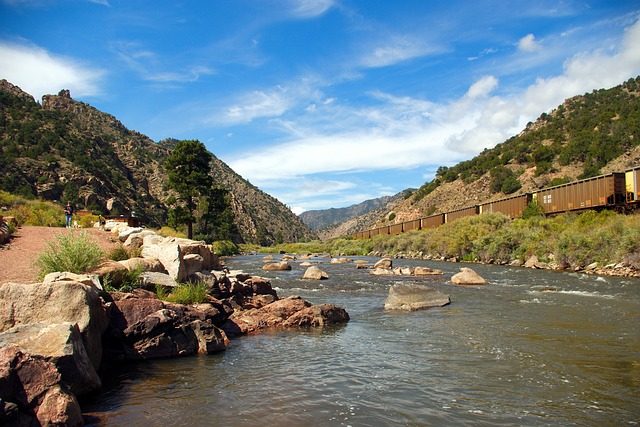 The Arkansas river goes all the way to the Mississippi River over 1,469 miles. Around 500 miles sits inside Colorado and the 102 miles between Leadville and past Royal Gorge are Gold Medal water. 100 miles of Gold Medal water is no joke but there is always a catch, the whitewater rafters, and kayakers that love to run the river. This only happens during the high water of spring and early summer and it’s not actually so bad. The river holds deep pockets and crystal clear runs and it best fished with nymphs and streamers during high water and dry patters during low water.\

That is enough talk about all the famous rivers. If you’re like me, then the best fishing is in the middle of nowhere, surrounded by nature with barely a human being in sight. In this situation, we are not looking for trophy fish, we’re looking for peace, nature, and art.

Every little stream in Colorado’s Rocky Mountains has got some wild aggressive cutthroat trout hanging out in them. These smaller streams are home to loads of small trout, crystal clear water and some of the best scenery a river can get. Unfortunately, it’s going to be hard to stumble upon the right part of a stream and you’ll need some local knowledge. It’s worth getting in touch with a guide and then hiking into the high country to immerse yourself in some of the wildest trout fishing a person can find.