California sits on the west coast of the United States bordering the Pacific Ocean. It is home to mountains, forests, stunning national parks, and gorgeous trout streams. The fly fishing in California is world-class and it’s also the native home of the Golden Trout. It is one of the few places in the world you can catch a truly wild golden trout as well as some trophy rainbows and browns.

The rivers and lakes hold a good number of hungry fish, some of which are pretty spooky and hard to catch. The scenery surrounding the rivers is beautiful and diverse. California covers a huge area and within it a lot of different ecological zones that make fly fishing there both interesting and a challenge. It’s hard to know where to start if you have never fished there and local knowledge goes a long way when trying to find a good fishing hole. It’s always worth getting a guide for a few days to get the lay of the land and to pick their brains about what flys work and when. Once you have some insider knowledge, then it’s time to do some DIY fishing. Here’s a guide to some of the best fly fishing in California to help you out. 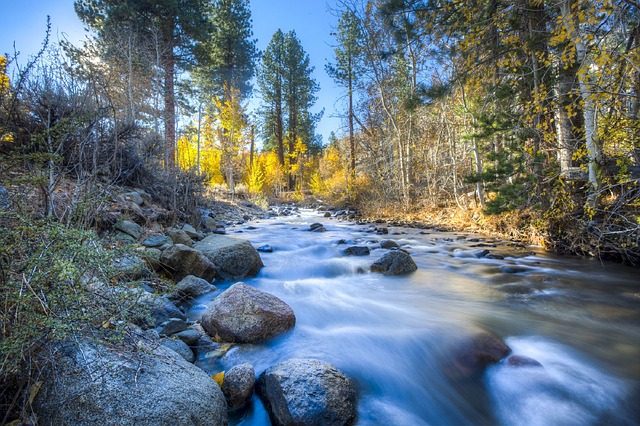 The Yuba River was almost at death’s doors but it is now one of the best trout fisheries in the western United States. The river was almost completely destroyed due to the effect of gold mining in the 1900s. The run-off from the mines caused a lot of the life in the river to be wiped out and this continued all over California until a law was passed banning hydraulic mining. The combination of these laws and the building of the Englebirght dam upstream, which collects sediment that would otherwise have been washed into the river, created an opportunity for the river to come back to life. Slowly the river regenerated and is now an incredible place to fish.

The Yuba River is located in northern California and holds a very healthy population of rainbow trout, one of the best in the United States. Access to the river is very easy and finding yourself walking down the banks while casting a fly to sipping rainbows will rival any previous trout fishing you might have experienced. The river is also home to salmon and steelhead although they aren’t really fishable as the areas where they come to spawn are closed during October and November. You will. however, probably catch a steelhead smolt or two while fishing for the numerous rainbows.

The Sacramento River is also in northern California. It starts in the Klamath Mountains and flows over 382 miles all the way to the Pacific. Both the upper and lower sections of the river provide some amazing fly fishing. The lower section is wide and deep with a slow meandering flow to it and begins below the Shasta Dam and actually runs through the town of Shasta. There is a very healthy population of wild rainbows in this section that will keep you entertained for days. This part of the river is a little urban, and you may not have the feeling that you’re in the wild but the fishing is still excellent. It’s best to fish a deep nymph or a streamer in this section due to how deep and slow the river is. In summer and fall, this section sees a good run of salmon and steelhead which are also worth swinging a fly to.

The upper Sacramento River pretty much follows Interstate 5 making it very easy to access. There are numerous pull of points all along the highway that will put you right next to the river. It does get busy in the summer so don’t be surprised if you haven’t got the river to yourself. The upper section is crystal clear and bouldery. It’s very different from the lower section, is surrounded by lovely scenery and full of aggressive rainbows waiting for your fly. Fishing is permitted all year round but the catch and release rules change from season to season and it’s worth checking before you go. 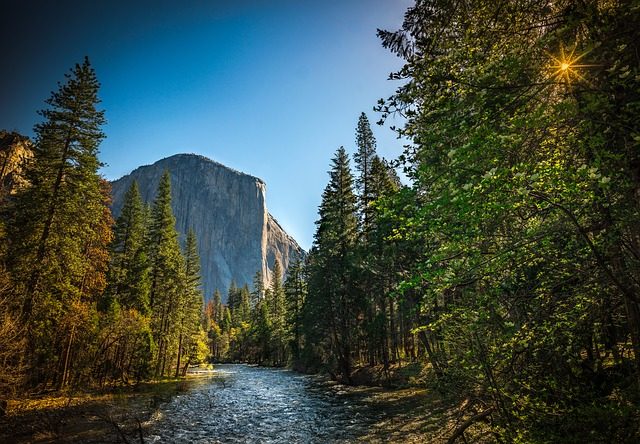 We have all heard about Yosemite National Park and it’s not just a fly fishing destination but a natural wonderland full of ancient forests, lakes, mountains and a whole host of activities that help you discover it all.  The national park and the surrounding area is huge and it’s hard to know where to begin in terms of fly fishing. The best river to fish inside the park is the Merced River. It’s surrounded by some of the best scenery a fisherman could ask for and it has plenty of hungry trout in it too.

The Merced River is the most well-known river in Yosemite and it can be busy at times but despite this, it’s easy to get away from the crowds and find a stretch all to yourself. Even in the height of summer, you can spend a day on the river without seeing another soul. It’s about as wild as the fishing gets in California and if you love a bit of solitude while fishing, Yosemite and the Merced will be right up your alley.

One of the best spots to start fishing is just down from the Yosemite Valley before the river deepens and arrives at the Merced Gorge. This area isn’t fished often and you’ll certainly have the place to yourself.

The Owens River begins in the Sierra Nevada, just southeast of Yosemite National Park and flows 120 miles down to Owens lake which is now dry. The upper section of the Owens River stars a trickling creek in a meadow just before falling into a canyon where it’s fed by a few lava tube tributaries. It’s easy to access, is full of rainbows and browns, and is surrounded by.  beautiful mountain scenery

The lower section starts just below the Pleasant Valley Reservoir and is a very productive tailwater. The river is much deeper here and wading it will be a challenge. It is, therefore, best fished by drift boat, along with your best flying fishing gear. This method of fly fishing will help you fish the hard to get to spots you wouldn’t be able to access wading. Catch limits are in operation on the Owens and make sure to check the regulations before you go fishing. 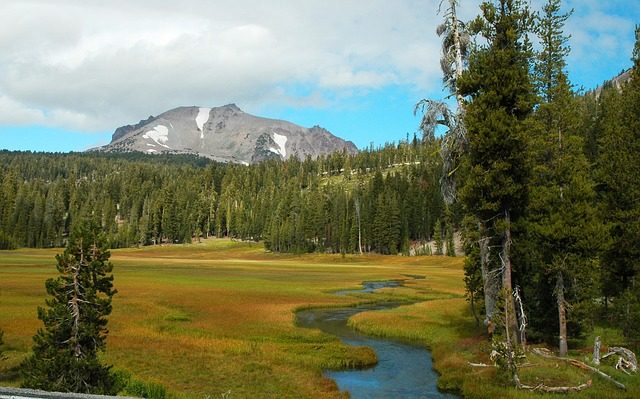 Golden Trout Creek starts up high in the Cirque Peak-Siberian Pass area of southern Sierra Nevada. It flows around 19 miles until it joins the Kern River just by Kern River Canyon inside Sequoia National Park. This river, as per its name, is home to Golden Trout and is one of the most beautiful places to fish for them. It’s believed that the Gold Trout in the stream as one of the purest strains thanks to the high volcanic falls that cut other species of trout mixing with them.

The upper section of the river winds its way through a large area of alpine meadows, the most well-known being ‘Big Whitney Meadow’. It’s a gentle part of the river where the water moves slowly and the river is very narrow. It’s great fun to fish as you have all the room to cast behind you but your accuracy needs to be on point to be successful.

The lower sections are home to more rapids and cascades but the stream stays relatively narrow as it goes. The banks are littered with willows and there are large boulders in the river. This area requires some skillful short casting.  It does quieten out again in Groundhog Meadow, where you won’t have to worry about your backcast again.

Hat Creek is a purist’s fly fishing dream. It’s akin to a European trout stream and there are actually chalk banks on some parts of the river. It begins in Lassen Volcanic National Park and flows 48 miles to Lake Britton. The river is full of aquatic life and provides an excellent amount of food for its brown and rainbow trout populations. The lower three miles of the creek have been labeled a ‘wild tout waterway’ and there are rainbows up to 2lbs and browns up to 6lbs that call the section home. It can get quite busy at times so don’t expect to have it all to yourself in peak season.

The Fall River sits in Shasta County and can only be fished by canoe or drift boat. This is because the land on either side is private and the only access point is at the town of Fall River Mills. The river banks are dotted with cottonwoods, aspen, and poplars that make it one of the most beautiful streams to fish in California. If you can, fish it in the fall when the leaves change, it’ll blow your mind. There’s a lot of rainbows in the river that easily reach 3lbs and the odd brown. Check the regulations on catch and release before you go as the limits often vary. 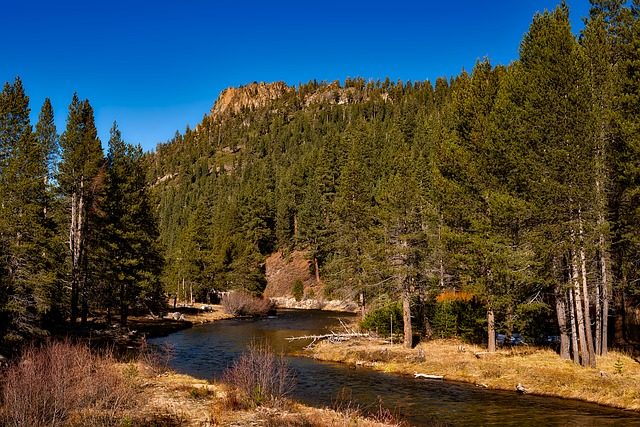 The McCloud River is well known in California and is unique in a way that it feels like a mountain stream but you’re actually fishing at quite a low elevation. It’s located near the towns of Dunsmuir and McCloud and sits between the Sierra Nevada and the Cascades. The river is stream-fed, runs through a heavily forested area and is home to a healthy population of rainbow trout that are on average 2lbs but if you’re on your game, there are some 5lb trophies to be had. The best section to fish is down from the McCloud Reservoir and is under the wild-trout management scheme.