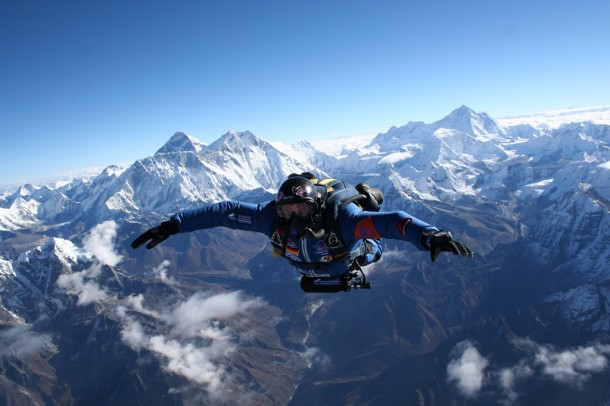 Asking if parachuting and skydiving is the same thing is a little like asking if the Rothschild Giraffe and the Maasai Giraffe are the same animal (this is why you should’ve paid more attention in school).

While both are extreme sports that involve falling to the ground and changing your underwear afterwards, there is one major difference. Parachuting involves the act of jumping from a plane with your parachute immediately deployed, while skydiving includes a freefall descent lasting one or more minutes before the parachute is opened.

Because skydiving requires the ability to properly time the opening of a parachute while falling, it is considered a more advanced sport than parachuting. Skydiving is also generally performed at a higher altitude than parachuting.

If you’ve never been before, here’s what you can expect from your first parachuting or skydiving adventure:

With parachuting, you will receive basic instructions. If it your first time jumping out of an airplane you may want to consider taking part in static line parachuting. With a static line jump, the parachute will automatically deploy as soon as you leave the aircraft. Because you can’t screw up too badly, you will be given the option to jump by yourself. Keep in mind that when you parachute, you won’t experience free fall.

With skydiving, you will fall to the ground at speeds reaching over 120 mph before the need for self-preservation will force you to pull the parachute release lever. Skydiving professionals will wait as long as possible to release their parachute since it allows them to build up speed, which contributes to the exhilarating experience.

Most novice skydivers must first jump in tandem with an instructor (unless you’re James Bond, in which case replace “instructor” with “delicate Russian goddess”). In a tandem jump you’ll be attached to an expert skydiver who will time your jump and pull the parachute open at the right time. However, if you eat all your vegetables that day, he or she may allow you to pull the ripcord. With a tandem jump, you will have the opportunity to appreciate the free fall experience without the stress of planning the jump and timing the parachute deployment.

In most cases, you’ll be opening the parachute around 800 meters from the ground. Today’s parachute manufacturers equip the device with self-inflating wings that limit your speed and allow you to control your flight after you’ve activated the parachute.

Recreational skydive jumps begin at around 1,000 meters and may extend to 4,000 meters. Compare this to 43-year old Austrian daredevil jumper Felix Baumgartner, who jumped from 21,640 meters (71,000 feet) in March 2012. He jumped from such a high distance in fact, that he had to wear a pressurized flight suit to survive the cold, thin air of the upper atmosphere. What makes this all the more amazing is that this was simply a practice jump to the 120,000-foot jump that is planned for the near future.

To parachute or skydive? Ultimately, the decision will depend on what you are looking to experience. Parachuting is a milder and more scenic experience, while skydiving is meant to get your endorphins pumping.