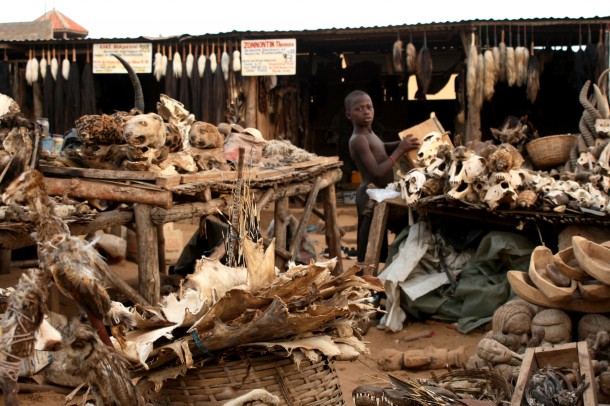 If Harry Potter were a real person (he’s not, we fact-checked), he’d tell you that the best place to buy bat-wings, tarantula legs and ostrich blood isn’t in the heart of London, but in the heart of Africa. So, if you’re into brewing Polyjuice Potions, Mandrake Draughts or some other concoction meant to make you all-powerful and everyone else less-so, then a shopping trip to Lome, Togo should be your next destination – to visit the Akodessewa Fetish Market.

What Is the Akodessewa Fetish Market?

The Akodessewa Fetish Market is said to be the largest voodoo market on the planet. It is located in the capital of Togo in West Africa, specifically in the district of Lomé. You can buy just about everything related to voodoo there.

If you want to visit the market, you can find the exact location on the map below

Much of our knowledge about voodoo comes from Hollywood movies and TV shows, so our understanding of the practices tend to be skewed towards something weird and mostly inaccurate.

Back in the day, there wasn’t a lot of tolerance and understanding, so when African slaves were brought to America, they couldn’t exactly exercise religious freedoms. As a result, they had to practice in secret to avoid punishment.  The times they were observed in their worship by someone, they were mostly wishing harm to the people who were whipping and beating them 12 hours a day.

Much like the Greeks who had a god for pretty much everything (like Epimetheus – the god of excuses), voodoo practitioners believe that a bunch of spirits (lwa) overlook every facet of the human life and report to an impartial master god (Bondyè). In its native setting (the one actually worth checking out) voodoo is a mix of folk medicine and superstition.

Want to be irresistible to the opposite sex? Want to be wealthier? Want your neighbours’ dog to stop barking in the middle of the night? Voodoo will help you with all that. Basically, it’s like the magic duct-tape for everything life has got to throw at you.

To get these spirits to make you into an attractive, rich, dog-intimidating-super-human, all you need to do is please them with worship and sacrifice. Enter the Akodessewa Voodoo Market. It’s the largest voodoo market in the world, and if your personal altar or cauldron needs a little extra pizzazz, you will find the sun-dried monkey, cat and crocodile heads, lizards, snakes, owls and much more sold there.

It doesn’t matter how many times you practice poking the dead herring or pike at your local fish market, it just won’t prepare you for the things you’ll see at Akodessewa.

As a tourist, you’ll probably be more interested in conservative souvenirs like the protective statuettes and amulets meant to bring you good luck, because the alternative: bringing the body parts of endangered species through customs on your return trip, might not quite go as you hope.

The statuettes and powders you will likely see are made by voodooists with knowledge of herbs, poisons, and the ritual creation of charms and amulets. So if you buy some of those, or elect to have the powders rubbed on you, you are bound to experience some weird juju…

Any time is good. Locals shop at the market regularly, so it’s not like it’s a temporary thing.

Free to walk around, and prices range for the items available.

Read a quick interview the BBC did with the owner of the Akodessewa Fetish Market.

2 thoughts on “Akodessewa Fetish Market – Shop at the Voodoo Supermarket”