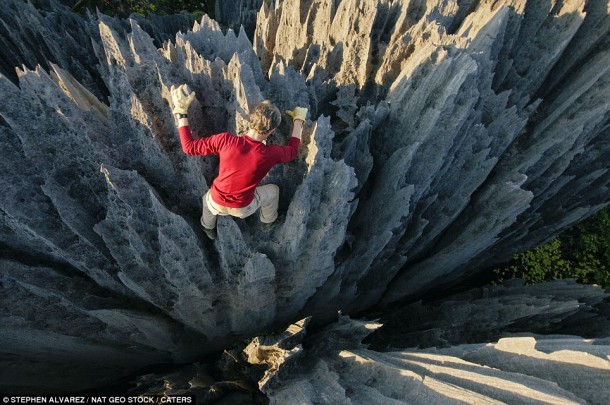 Many people don’t know much about Madagascar apart from the fact that it is inhabited by crazy dancing lemurs that like to move it move it. The island is internationally famous for these weird and wonderful primates that are furry, bug-eyed and very mysterious. They are totally unique to Madagascar and own a number of bizarre behaviors from singing like a whale to dancing like a ballerina – not unlike your uncle after few drinks.

On a luxury safari in Madagascar you’ll get to see these fascinating creatures up close in their natural habitat and also have the chance to see some of the most amazing amphibians and bird-life in all of Africa.

There are over 30 lemur species in Madagascar and all vary in size, colors and appearance. Some are so small they could fit in a match box and others are large and can leap over ten metres!

All lemurs except for one species have long tails that they use for balance. They often sit or stand up, but do not walk upright as other primates do.

Lemurs live in families of up to 15 members and many consist of males, females and then their little ones, however there are some that only include the females and their young.

One of the most interesting things about lemurs is that the women dominate! The female is the leader of the family and rules all, having the first choice of food and mates. The females also have the natural ability to go into survival mode and shut down their need to mate when there is a shortage of food, shelter or tall, dark-haired lemurs with high-paying jobs.

Madagascar, often referred to as “The 8th Continent” is renowned for the diversity of its wildlife and flora as well as its unique landscapes of glorious Indian Ocean beaches, montane rainforests and picturesque towns and cities. The tourism infrastructure in Madagascar is not as developed as mainland Africa, but this really provides an unspoiled wilderness adventure that is perhaps missing from more mainstream African destinations. Madagascar was once a French colony and its influences can be found in the style of accommodation and the cuisine that is served. The people are extremely friendly and the standard of service is high, so if you were looking for hostile, mean-spirited locals and poor hospitality, you’re out of luck.

While a safari in Madagascar can be combined with another location in Africa, it is advised to spend at least ten nights here to explore all that this diverse country has to offer. There are some exquisite beach hideaways on the north and western coasts that lead to magnificent coral reefs for snorkelling and diving opportunities and this also means you can indulge in the wildlife, scenery and the beach without needing inter-connecting international flights.

With unusual wildlife, spectacularly diverse scenery, beautiful beaches and an interesting history and culture, Madagascar is certainly one of the more unique places to be in Africa.

Even though the Trumps are yet to build a Casino on the island, that doesn’t mean Madagascar doesn’t know a thing or two about luxury. As you explore rainforests, pristine beaches and rich flora and fauna, you’ll get to stay in luxurious accommodations complete with en suite facilities, a swimming pool, fine cuisine and stunning views across the landscape. You can start in the capital city, Antananarivo, and choose to explore the lush rainforests of the eastern highlands, the dry and rocky terrains in the south, or perhaps the isolated beaches in the north-west. Or, you can stay put and read TheAdvenTourist in a dark room for seven nights.

Accompanied by an English-speaking knowledgeable private guide, you’ll walk and drive through the country’s most famous sights and if you fancy something a bit more active you can enjoy watersports, fishing and boat trips along the coast.

With unusual wildlife, spectacularly diverse scenery, beautiful beaches and an interesting history and culture, Madagascar is certainly one of the more unique places to be in Africa.

For those who prefer dry and cool weather, visit during April and October. If you’d prefer the warmer weather, go between November and March but note there is more chance of rain during this season.

Dora the Explorer – Since 80% of the animals found in Madagascar do not exist anywhere else on Earth, it will feel like you’re exploring a brand new world.  But with your own personal chaperone guide and five-star amenities, you travel will be pretty childsafe.

Spending 2-3 weeks in Madagascar is recommended to get the most out of your experience. This would start from $6400 per person.

Learn more about luxuri safari’s in Madagascar and about lemurs.

1 thought on “A Luxury Safari With the Lemurs”