If you’ve ever vacationed at a popular beach getaway like Cuba, the Bahamas, or California, you might have noticed that you were surrounded by something that the pictures of happy people in the travel brochures just did not show. That ‘something’ that we’re talking about is a massive crowd of tourists that encircles you on the beach, preventing you from getting a spot close to the water and kicking sand onto your face every time you close your eyes.

Luckily for us, the ultra-rich have long ago come up with a brilliant solution for crowd control. They got their own private islands!

You should probably consider buying your own private island too, but while your money is tied-up in say, non-existence, you can simply rent. That option should work out pretty well for you, since unlike the ultra-rich, you are likely to be working for 50 weeks of the year and vacationing for the other two. Those numbers are flipped for most island owners.

Several islands around the world can be yours for a few days, a week, a month, whatever. For example, the Pulau Macan island in Indonesia can be yours to host a giant party for $1,200-1,700 USD a night. So if you split the cost with 10 friends, you’ll have your very own private island for a week for right around 800 bucks! We think that warrants repetition — private island for a week, for $800! You still feel like going to Cancun for your vacation?

Turns out there are a lot of islands for rent all around the world, and many are surprisingly affordable.

One of those affordable islands is Fort Morgan Cay in Honduras. If you’re not a history or a geography buff and you still find that the name kinda sounds familiar, it could be that you’re an alcoholic. Yes, Captain Morgan’s Rum and Fort Morgan Cay are both named after Sir Henry Morgan: the Welsh-born bloke that settled in the Caribbean islands as a nobody and through his escapades as a buccaneer and pirate became the Governor of Jamaica.

While Fort Morgan Cay bears Morgan’s name, the historical connection to Henry Morgan isn’t strong. In fact, until recently the island was called Fort Cay and George’s Island on old British maps. But, that shouldn’t deter the average pirate enthusiast from visiting, as it sits right in the middle of the area that was central to Spain’s trade with the New World and has seen its share of privateers and pirates.

Fort Morgan Cay is about 29 acres (12 hectares) of picturesque views and for a week it can be your private getaway. It can be the place for your playground, clubhouse, fishing retreat, romantic honeymoon, bachelor party, or lair, if you happen to be a villain that needs an island in a pinch. However you use it, you’ll be living on an exclusive island with just enough staff to take care of all the boring things like cooking, cleaning and laundry, so you can spend more time relaxing and getting a tan that even seasoned nudists would envy. 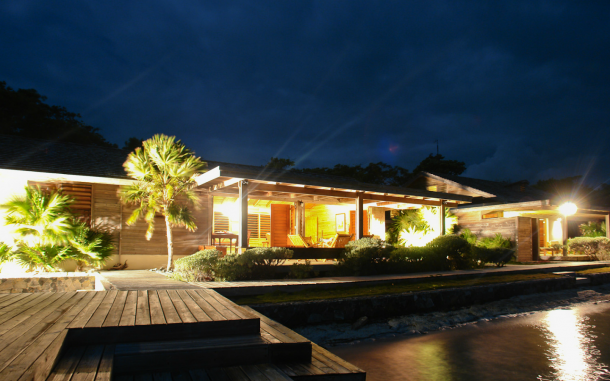 This isn’t one of those stupid live-in-a-tent with no running water to be eco-friendly islands. At Fort Morgan Cay you’re buying luxury. Looking after your requests is a dedicated full-time staff that comprises a personal chef, two housekeepers/launders, and a boat captain/facilities manager.

Unlike the pirates that used to pass out on the sandy beaches, you and up to 9 of your friends will have the option of passing out in one of the four air-conditioned mahogany suites. The next day you will probably start planning heists and researching extradition laws from Honduras so you can stay at Fort Morgan Cay permanently. And, to help you in your research, this 5,000 square foot (465 square meters) estate has a full library and internet access.

For on-site recreation you’ll have access to a game room, pool, three private beaches, mangrove, fort ruins, and great snorkling and fishing spots. Just off the shores is the the world’s second largest coral reef – the Mesoamerican Barrier Reef. With unlimited use of snorkelling equipment, sea kayaks, jet skiis and sail boat, many visitors choose to explore the underwater world in search for blue crabs, turtles and other weirdly shaped creatures.

If that’s not enough for you, here are some more activities that Fort Morgan Cay’s management thinks you might be interested in:

You can head into Roatán for activities such as horseback riding, day spas, zip lining above the rain forest canopy, swimming among trained dolphins, or visiting butterfly and iguana farms. And at night, try out the West End of Roatán for dancing and partying.

If you desire to extend your visit to other areas we can arrange for a private aircraft to take you from Fort Morgan Cay’s private runway to the destination of your choice. We suggest a visit to Copan, the impressive ceremonial Mayan center in the mainland or an exciting white water rafting trip in La Ceiba.

Yup. You’ll have a personal runway, which is more than the entire country of Liechtenstein can say. 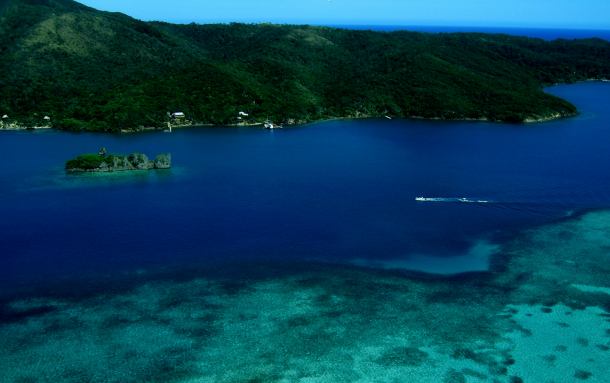 The high season for Caribbean travel is from mid-December to mid-April: the climate is dryer, but the colder weather in North America brings in more tourists to the area and drives up the demand. Mid-April to mid-December is the low season, since fewer people want to go on a tropical vacation when it’s warm at home. During the same months, the Caribbean goes through its rain and hurricane season. It’s a bit more expensive, but probably better to go during the high season.

The Lindsay Lohan – experience a life of exclusivity and pampering that would normally be reserved for celebrities in rehab, but retain the lucidity to tell your friends about it!
Extra bragging points if you:

It costs 3,000 USD per night or 21,000 USD per week. Included in that cost is the transfers to and from Roatan International Airport, maid and laundry service, linen and towel service, bathrobes and toiletries, and unlimited use of sea toys (kayaks, boats, etc). Unlimited fuel is not included, but visitors are charged at cost for as much as they use. There is also an all-inclusive rate which covers all food & drinks (both alcoholic and non-alcoholic) for 4,000 USD per night, and 28,000 USD per week.

There are many private islands all over the world. Fort Morgan Cay just happened to be the one that appealed most to us. You can find more information from their site or their Facebook page. As for the other two islands we liked; one of them is the Isla Kiniw in Spain, and the other is Indonesia’s Pulau Macan. Or perhaps you’ll just find something in your own back yard from the islands for rent listing