Situated on the Dalmation coast by the Adrian Sea, Zibernik, Croatia is directly on the path between Split and Zadar. The pace is slower, making it a great choice for travelers looking for a less-touristy destination, and of course, history buffs. It is certainly not as popular with digital nomads as say the low-cost city of Split, but it also makes a great base to explore Croatia.

The entire Old Town district consists of buildings, arches, and stairways made of stone. Sibenik’s magnificent and beautifully preserved Medieval architecture has withstood close to a millennium of winds, waves, and wars. Begin exploring by wandering the cobbled streets, climbing the stone stairways for stunning views, and then add the following list of 10 things to do in Sibenik. 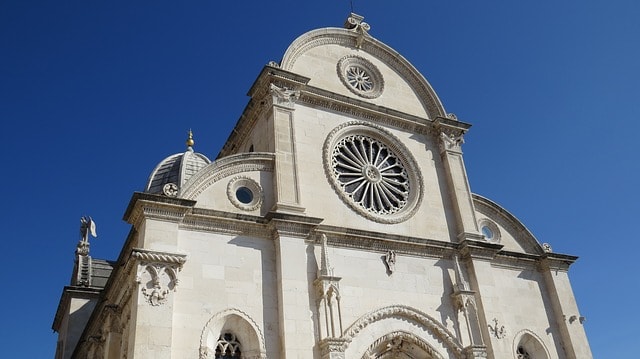 Sibenik is full of historic buildings, and this is a great place to start. One of Croatia’s architectural highlights, the Cathedral of St. James is a UNESCO World Heritage site. A Venetian architect named Antonio Dalle undertook the project early in the 15th century. Construction was passed on to sculptor Jurac Dalmatinac, and Nikola Firentinac completed the job more than 100 years later. The dome shape of this important Rennaisance monument can be spotted from almost anywhere in the city, and Game of Thrones fans are sure to recognize the Cathedral as the site of the Iron Bank. One amazing feature is the intricate frieze with faces representing 15th-century townsfolk.

The city’s town hall is a magnificent old two-story structure directly across the square from St. James Cathedral. Renowned for its large columns, balustrade, and arches, the building is well worth a visit. The original town hall was built by Venetian architect Michele Sanmicheli. Although destroyed in an Allied air raid on the city during World War II, the building was reconstructed after the war to reflect Renaissance architecture dating from the middle of the 16th century. The surrounding grounds are beautiful, and a quaint square is nearby.

Zibenek’s location in the Adriatic Sea gave it a highly-coveted position for Mediterranean military strategy. The city’s rulers knew that, so they erected fortresses and fortified city walls. The preserved remains of the fortification system are a must-see for travelers and include Fort St. Micheal, Fort St. John, Fort Nicholas, and the Fortress Subicevac. All were built between the 15th and 17th centuries. While all are worth a visit, Fort St. Micheal has a particularly stunning view of the islands and the Adriatic Sea, and there’s a cafe where you can have a drink and watch a spectacular sunset.

A short drive south of Zibernik, the Dalmatian Ethno Village is one of Croatia’s newest attractions. Popular with travelers, the village is part of the Solaris Beach Resort complex. Visit the village to get a first-rate insight into how people indigenous to the area have lived over the centuries. Walk the charming cobbled streets, sample traditional foods, and learn how they’re prepared. Other highlights to check out include weaving workshops, craft fairs, a 100-year-old watermill, and an original olive press.

Zibernik’s long and fascinating history calls for museums, and the city delivers well. A short stroll from St. James Cathedral, you’ll find the Count’s Palace, a Renaissance-era Rector’s Palace originally built as the governor’s residence during the 16th-century Venetian rule. Today the building houses the Civic Museum featuring artifacts from the Neolithic era to Roman times. Another museum you don’t want to miss is the Victory Museum. Open since 2016, the museum documents the liberation of Dalmatia from Fascism in 1944. Archived footage is shown in a multimedia room.

Take some time for quiet reflection at this carefully researched and landscaped space around the old St. Lawerence Monastery. Located on the edge of the Old Town, the plot was neglected for centuries until an expert landscaping team took over and planted medicinal herbs and fruit trees in the shape of a cross. It now serves as a relaxing tourist attraction and educational resource for local school children who help maintain it. Follow the pathways and spend time on the patio to enjoy peace and greenery. The gardens are open the year-round and host outdoor events in the summer. 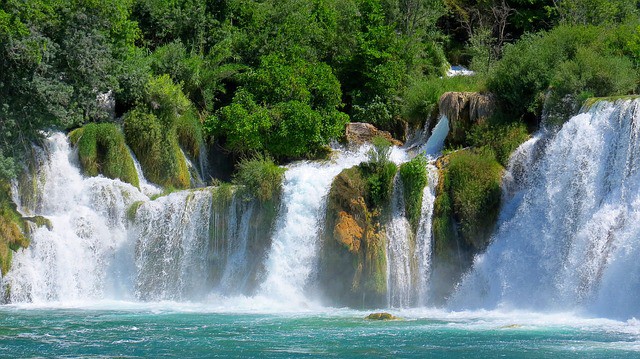 In Sibenik, you’re close enough to visit the Krka National Park (15 minutes by car), a national park that protects the areas around the River Krka. The park is exceptional for offering all types of activities from recreational to educational and cultural. You’ll be amazed by the sheer number of cascading waterfalls. The Skradinski Bur waterfall is the star attraction and can be viewed from a boardwalk that encircles it. Lake Visovac is at the center of the park right below the Roski Slap waterfalls. Home to around 200 bird species, the park is popular with birdwatchers. The park can be accessed from Lozovac and Miljevci, or by boat from Skradin.

Food is always an interesting (and tasty) way to explore a new culture. Sibenik cuisine had been gaining popularity on the world gastronomy stage, so you don’t want to miss out. Have dinner at Peligrini, voted Best Restaurant in Dalmatia. Peligrini’s chefs host an international food conference bringing food experts together with leaders in the industry. The culinary and historical background of the dishes represents Austro-Hungarian, Ottoman and Venetian empires. Food writers and travelers from all around Croatia flock to the award-winning restaurant for classic Dalmatian cuisine such as hake, monkfish or lamb served with locally-sourced vegetables.

The Aquapark is a part of the Solaris Beach Resort, but it’s open for everyone to enjoy. The themed waterpark of more than 8,000 square meters includes waterfalls, slides, jets, sprinklers, a lazy river, and a fairytale cave making it a great place to cool off on a warm Croatian summer day. Children can play in perfect safety while grown-ups take a break in comfortable beach chairs underneath colorful parasols. Parents will also love the lazy river that passes under a huge tipping barrel of water. Homemade ice cream is served at the snack bar. 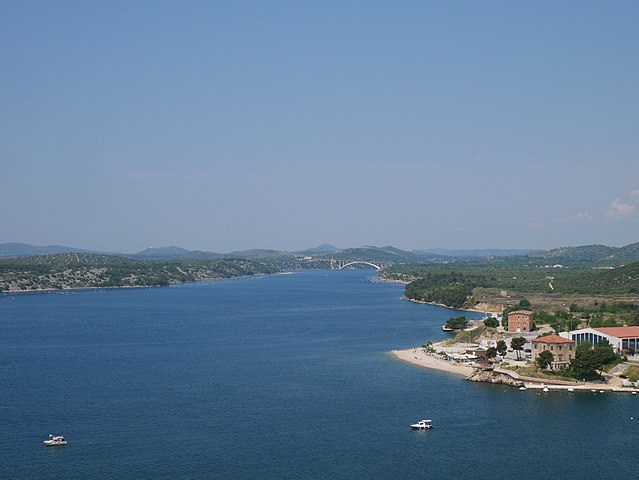 If you’re a beach lover, you’ll want to experience the pebbly Banj Beach with its lovely view of the Old Town. You won’t mind the 10 to 15-minute walk from town as it passes along a promenade with views of St James Cathedral, St Michael’s Fortress and St Anthony’s Channel. The statue of King Petar Kresimir greets you at the beginning. Once there, the water is perfect, and you can watch sailboats passing by. Banj is a Blue Flag beach and is recognized as one of the world’s top nine beaches. Relax in the sun and enjoy nearby restaurants, bars, and nightlife.