Putting line on a spinning reel sounds like a simple task when you think about it, you just wind on the line right? But, unfortunately, it isn’t that easy. There is quite a lot that can go wrong and, if it does, will cause issues while you’re fishing. I have had days out there where the line bites and gets stuck and overwinds make me lose fish. Getting right from the get-go will avoid all these issues so you can have a fun and relaxing day of fishing.

Here I’m going to break down what you’ll need and the step by step instructions of how to put line on your spinning reel.

There are a few decisions to make before you start and here is what to consider. 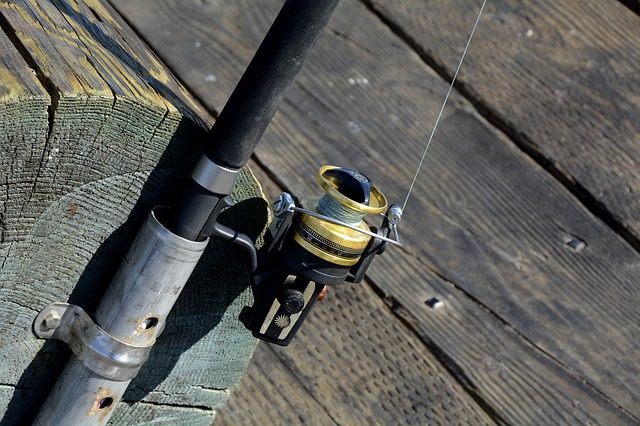 Firstly, do you want to use braid or mono on your reel? Braid has its advantages but its more expensive than mono. Braid helps you cast further and more accurately. It also has less stretch than mono and will give you more of a connection to your bait and the fish. And it lasts a lot longer than mono, you won’t have to change it as often which may make up for the extra cost.

If you’re worried about the price of braid, you can put mono backing on braid to use less of it. But this will reduce the amount of line you have on your reel and if you’re fishing for fish that take long runs you’ll need all the line you can get.

I always put braid on my reels, it is the best line out there.

Is Your Reel Braid Ready?

A braid ready reel means you can put braid directly on to it without it bunching up, and most reels today come with braid ready spools. If you’re using an old reel you can take some electrical tape and wrap it evenly around the spool to make it braid ready.

Once you have got everything together, we can get started.  Here are the step by step instructions to put the line you have chosen on to your reel.

This is the easiest part. Set up your rod as if you were going fishing and attach you reel firmly to the reel seat.

Get your line, braid or mono, and carefully take some off from the spool. You’ll only need to pull out 10-15ft of line from the spool to avoid any tangles. If you plan on using a mono backing, you’ll use mono here and tie on the braid later.

Now thread the line through all the eyes of your rod for the top and ending at the reel. Open the bail arm of the reel and make sure it remains open while you tie the line to the spool. If the bail arm is not open, you’ll have to cut and re-tie the knot because if the line isn’t under the bail arm, the reel won’t be able to wind it on.

Now it’s time to tie an arbor knot with the line to the spool and here is how to tie it. Make sure it is tight enough so it doesn’t slip and test it. If you’re using braid and your reel isn’t braid ready, use the electrical tape and wrap it around the spool before you tie the knot. The braid won’t slip once you’ve done this.

Step 3 – Get Your Friend Ready

Put the two chairs about 25ft from each other and sit down. Get your friend to pick up the spool of line and place the screwdriver through the hole in the middle. The spool will now spin around the screwdriver. Whilst your friend holds the screwdriver and the spool in one hand, they need to take the cloth and use it to hold the other side of the spool. The cloth is there to put pressure on the spool so that when you start winding, there is some pressure and the line goes on the reel tightly. The cloth will get hot so pause if you need to.

It’s important to try and keep consistent pressure throughout the process.

Step 4 – Winding The Line On

The line needs to be wound on to the spool neatly and with as much pressure as possible. This’ll remove the chance of any overwinds or line bite, which is what we are trying to avoid.

Now, pick up your rod and reel, pointing it at your friend who’s now holding the spool on the screwdriver and the cloth for pressure.

Make sure the drag on your reel is very tight and lift your rod to an angle, point it at your friend’s head. You’ll want to see a little bend in the rod when you begin to wind.

Begin winding and keep an eye on the line while it goes onto the reel. Try to keep a medium pace and don’t go too fast, keeping the line tight and neat. Be certain about the pressure and ask for more or less as you need. Check the line now and then as you go by pressing the line on the reel. It should be hard, if it’s at all soft, you have to start again.

Step 4b – If you’re using a mono backing

If you have chose to use a mono backing, fill your reel to about  ¼ or a ⅓, or less, it’s up to you. When you get to this point, snip off the mono at the spool, not at the reel. Tie on your braid to the mono using the FG knot and here is a video explaining how to tie it. Once it’s tied on you can continue winding as per the above instructions.

Keep going with Step 4 until the reel is full. Do not to overfill the reel, this will make the line fall off the spool randomly and it’ll come over the lip. You want to stop while there is still a lip between the top of the reel and the line. If in doubt, it’s better to stop a bit earlier.

Now it is time to check it again. Press the line, if it’s not hard you’ll need to restart Step 4. This will involve putting all the line back on the spool by hand, it’ll take ages.

Step 6 – Tie On Your Leader

If you are using braid, tie on the fluorocarbon leader using the FG knot as per the video before the one above.

That’s it, now you are ready to fish. It is pretty simple once you get the hang of it and you’ll know it like the back of your hand with some practice.